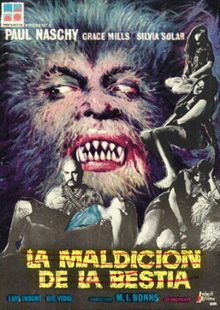 In my review of WEREWOLF IN A GIRLS' DORMITORY I compared that film unfavorably with he "delirious heights" of the Paul Naschy werewolf films.  Having made that claim, the least I can do is to back it up with a viewing of a pair of Naschy's horror films. To be sure, most if not all Naschy horror-films are thoroughgoing exploitation, in which the creators' need to keep the viewers' interest with dollops of sex and violence is paramount. Still, despite all the sex and violence, Naschy and his collaborators tapped a certain romantic quality, in that many of Naschy's monsters need love more than mere sex.

Like the other "Hombre Lobo" films that precede this one, the story starts from square one, with no attempt to maintain inter-film continuity.  This time Naschy's recurring character, Count Waldemar Daninsky, is a renowned world explorer who has no history of werewolfism.  He signs on with an expedition which ventures into the mysterious territory of "Karakorum"-- possibly a reference to the real-life mountain range, though the real range doesn't appear to intersect with Tibet, the expedition's destination.  The explorers seek scientific confirmation of the existence of the renowned Yeti.

Though the Yeti does exist, he's decidedly a minor player in this tale.  Though the Europeans are warned in advance that Karakorum is a haunt of all sorts of demons, not just Yetis, Waldemar finds out the truth of that warning when he trespasses on an ancient temple therein.  He encounters two bizarre women who have fangs like vampires although they seem interested than consuming flesh more than blood.  The women take Waldemar prisoner, intending to use him as their sex-slave.  Waldemar manages to kill one of them and escape, but now he too carries a demon's curse, as their bites  have transformed him into "El Hombre Lobo."

Meanwhile, one of the other expedition-members, waylaid by local bandits, is saved by a lone Yeti who tears apart the bandits but leaves her alone.  Oddly, this Yeti looks much like Waldemar's wolfman, and isn't even the traditional snow-white hue.

A larger group of bandits takes the whole expedition prisoner and subjects them to torture and humiliation, mostly at the hands of a female bandit improbably named "Wandesa," an inside reference to earlier Naschy films that used the same name for a villainess.  Meanwhile, Waldemar finds temporary surcease from his sorrows with a Tibetan priest, who tells him that he can be cured by a certain flower and by the intercession of a virgin girl who loves him.  Arguably this scenario mixes elements from two Universal films, 1935's WEREWOLF OF LONDON and 1944's HOUSE OF FRANKENSTEIN-- a connection supported by the fact that one of the supporting characters is named "Larry Talbot" after the Universal Wolf Man.

YETI really has no plot as such: it merely mingles scenes of Waldemar's cursed fate with the sufferings of the explorers.  In non-werewolf form Waldemar does help some of the travelers escape, though quixotically the narrative places more emphasis on several of the female characters revolting against the bandits and killing Wandesa.  Say what you will about Naschy's films, but female characters are capable of significant acts of violence in them, even without being literal monsters.
The film ends with Naschy's wolfman happening across the Yeti.  The two fight and almost kill one another, but a girl-explorer who's happily fallen in love with Waldemar shows up with the magic flower and saves Waldemar from death. 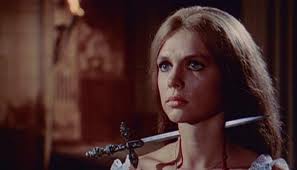 COUNT DRACULA'S GREAT LOVE is somewhat stronger plotwise, perhaps in modeling itself more on the Hammer Dracula films.  Five travelers, made up of one man and four women, become stranded in Carpathia and must take refuge in the castle of eccentric Doctor Marlow (Naschy).  In time they learn that Marlow is actually the reborn Dracula, but not before he kills the male traveler and vampirizes almost all the women except one.  In keeping with the virgin/whore vampire-mythology advanced in Stoker's DRACULA, Dracula has no compunction about vampirizing "loose" women, but he wishes to take his time with those of more decorous nature.

In addition, Dracula is haunted by a legend, that his already formidable powers will be heightened if he can cause such a virgin to fall in love with him naturally, sans any influence by his supernatural influence. Only one girl in the foursome, name of Karen, becomes romantically interested in Dracula even after she knows what he is, while the other vampire-trollops become his new harem, going forth to prey on the local Carpathians.

The most peculiar element of Naschy's script is that in addition to amping up his power with the sacrifice of the virgin who loves him, it will also somehow revive Dracula's daughter "Radna," who is apparently sleeping somewhere within the castle.  The English script goes so far as to say that when Radna is so revived, she will become the new Countess Dracula-- which sounds like it's promoting a more intimate encounter between the count and his daughter, far beyond anything in 1936's DRACULA'S DAUGHTER, and more like the perverse relationship suggested by 1935's MARK OF THE VAMPIRE.

Dracula eventually kills off all of his unworthy brides, but he continues to allow Karen free choice.  She turns against her love for him and rejects him, so that, in a rare turnaroud, the vampire-lord kills himself for love (hence the title).  While the film is too loosely scripted to earn much drama from this turn of events, the direction and photography contributes greatly to giving LOVE a more moody feel than one usually sees in a Naschy film.

On a closing note relating to my Theory of the Combative Mode, THE WEREWOLF AND THE YETI would not conform to this mode, for though it does contain two monsters going at each other, the story presents their battle almost as an afterthought, rather than centering upon the encounter as would a combative story like 1943's FRANKENSTEIN MEETS THE WOLF MAN.
Posted by Gene Phillips at 3:31 PM
Email ThisBlogThis!Share to TwitterShare to FacebookShare to Pinterest
Labels: the marvelous