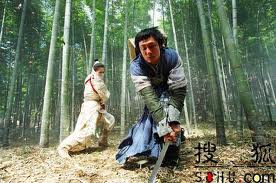 THE WHITE DRAGON, a very uneven comedy-adventure, has just one saving grace: the impressive looks of star Cecilia Cheung, a high-school-aged student who finds herself drawn into the life of a *wuxia* superheroine.

As with many Chinese *wuxia* vehicles, the action takes place in a vaguely medieval context, though it's apparently not terribly far back, since the heroine is seen playing Beethoven's "Ode to Joy" on her flute.

I would generalize that many Chinese martial arts films have a picaresque feel, moving erratically from one fantastic setup to the next.  In contrast, WHITE DRAGON, while it's not any more "naturalistic" in its tone than its phenomenality, is rather drab in its uninventive pursuit of the "kung fu superhero" pattern.

The story in a nutshell: young Phoenix Black (Cheung), a narcissistic young beauty with no thought of becoming a superheroine, gets caught in the midst of a battle between an elderly martial-arts heroine, the first "White Dragon," and a young but blind professional assassin with the risible name "Chicken Feathers."  Because Old White Dragon finds herself unable to cope with the superior martial skills of Chicken Feathers, she decides on her own recognizance that she'll transfer her martial powers to Phoenix, transforming her into "Young White Dragon."

The height of the "comedy" here is that having all this supernatural power causes Phoenix to contract that dreaded teen disease, "acne."  She can only rid herself of this pestilence by doing good deeds, such as robbing from the rich and giving to the poor, or tracking down Chicken Feathers.

Her foe, however, has more dimension than the heroine.  He's a soulful type who went blind from looking at the stars in the rain, and turned to the trade of kung-fu assassin as a compensation for his blind status.  One of the Emperor's sons, who has a romantic interest in Phoenix, encourages the new White Dragon to corral the assassin.  Phoenix finds herself no less powerless against Feathers than her perceptor, and indeed begins to fall in love with him, and he with her.  But a real villain is behind Feather's most recent assassination-assignment, and even when Feathers tries to reform, the villain stands ready to destroy him and the White Dragon too.

Chinese mainland comedy is an acquired taste, but I've certainly seen better examples of same than WHITE DRAGON.  In addition, the stuntwork is just fair, and takes a decided back seat to the romantic plot.  There's one decent fight at the climax between Phoenix-Dragon and the main villain, but there are dozens of better marvelous kung-fu films that have done much better, not least 1993's BUTTERFLY AND SWORD.

Posted by Gene Phillips at 3:36 PM
Email ThisBlogThis!Share to TwitterShare to FacebookShare to Pinterest
Labels: combative comedies, the marvelous