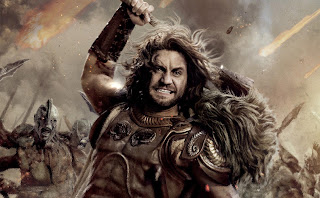 
As is most often the case in Hollywood, the success of a given film—in this case 2010’s CLASH OF THE TITANS—begets sequels and derivatives capable of imitating only the simplest aspects of the thing imitated.

Louis Letterier’s CLASH had its own textual problems. Nevertheless, though it was riffing on the 1981 Ray Harryhausen film, it put forth a reasonably compelling story concerning the nature of the ancient Greeks’ belief in their gods, and managed to explicate the complicated interrelations of the family of the gods, their foes the Titans, and the mortals caught between their struggles.

In contrast to this, the sequel WRATH OF THE TITANS left me with one dominant impression: it knows how to blow stuff up real good.

The most mythic aspect of Letterier’s CLASH—that of the hero Perseus’ protection by and marriage to Io—is abandoned; Io is dead and gone at the time the film begins. In substitute Perseus will be linked up with his original bride from the Greek myth, Andromeda, whom he rescued in CLASH but did not marry. However, Andromeda plays so minor a role in the film that this aspect of Perseus’ adventures hardly matter.

Once more, the plot concerns the plot of vengeful death-god Hades to take over the reign of heaven and earth from his brother Zeus, in part by the device of releasing the long-imprisoned Titans and causing the usual chaos on Earth. In this endeavor Hades is aided by a traitor-god from Olympus, Ares the God of War. However, director Jonathan Leibesman devotes no time as to why Ares turns on his brethren. More time for explosions that way.

Similarly, though Sam Worthington once more essays the role of Perseus, it’s a Perseus who has no time for philosophical debates as to whether or not mortals owe anything to the gods, who, as Shakespeare more or less said, use them for their sport. Perseus gathers an army and proceeds to fight against the minions of Hades until he beats him. The End. 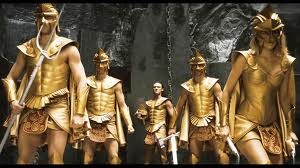 In contrast, Tarsem Singh's IMMORTALS must make a little more effort to provide a setup, for it’s presenting its first-time take on the adventures of the hero Theseus, who like Perseus finds himself caught between a clash of gods and Titans. However, the script provides little in the way of continuity or explication, so that as with WRATH the audience gets what amounts to a big-screen video game.

Most of the scenes in IMMORTALS Theseus feel cribbed either from Letterier’s CLASH or from Zack Snyder’s 300. Theseus—who in Greek mythology was the son of a mortal woman by Poseidon—is simply a mortal bastard who may or may not have been sired by a god. In the humble village where he is raised, the other peasants believe him the sire of soldiers who raped his mother. Theseus’ mother is a believer in the gods while her son is a skeptic. And though she’s right about the existence of the gods, in contrast to the real myths the gods barely interact with mortals. Zeus takes an interest in Theseus for his courage and fearlessness. But Zeus has a strict non-interference policy: gods are not supposed to interfere in the affairs of mortals unless the gods face danger from the peril of the Titans.

Hyperion, leader of a band of non-Greeks given the odd name of “Heraklions,” wishes to lay waste to the Greek nation not only by force of mortal arms but also by releasing the Titans from their rocky tomb. To do this he needs a magical god-weapon called the Bow of Epirus—supposedly forged by Herakles, who in real myth wasn’t exactly known for blacksmithing—with which he can blast open the Titans’ prison. One of Hyperion’s forays takes him to Theseus’ village, where he cuts the throat of the hero’s mother and sentences Theseus to the salt mines. In essence he becomes a symbolic “evil father” like the figure of Acrisius/Calibos in CLASH. However, Hyperion’s obsession with destroying the Greeks is given no more depth than the Persians’ lust for conquest in the Snyder 300.

Transitions take place with no regard for continuity. The oracle Phaedra—love-interest to Theseus, who somehow meets her on his way to the salt-mines—advises Thesesus to venerate his dead mother by going back to the village and burying his mother. This is one of the few sequences where the characters seem like archaic Greeks, reminding one of the Greek horror toward leaving the dead unburied seen in ANTIGONE. But the only real reason the sequence exists is so that he can discover the Epirus Bow hidden in a big rock inside the burial crypt. Who put it there? Was it supposed to be a test of Theseus’faith, which he passed by burying his mother? The script doesn’t bother to say.

Similarly, though logically one might expect Zeus to want to blast with lightning an impious mortal for seeking to free the Titans, instead Zeus wants Theseus to do the deed without help from the gods. To that end Zeus will even kill his own deific family members if they transgress his non-interference policy, though conveniently for the script, Zeus lets some of the gods help Theseus out of tough spots before the thunder-god lays down the law. This seems like a long way to go just to see a particular mortal accomplish his heroic goals—though to be sure, this is in line with IMMORTALS’ clumsy theme: that heroes’ glorious deeds are the only true source of “immortality.”

At some point Hyperion gets the Epirus Bow and approaches the walled city that bars his way to the Titans’ prison. Hyperion and Theseus face off in a pre-battle negotiation of terms, during which Hyperion plays Darth Vader and invites the hero to come over to his dark side, without success. The city’s ruling council is filled with the usual prating politicians seen in 300, and Theseus is forced to override them in order to lead the soldiers into battle with Hyperion’s forces. The battle even employs a version of the Spartan “hot gates” strategy from the Snyder film.

There follows a big battle involving mortals, gods and Titans, but Singh takes a mechanical approach to the battles, apparently emulating 300’s similar fight-choreography. For me this is the polar opposite of the kind of visceral thrills adventure-films should offer, and Singh succeds in this department even less than Zack Snyder in 300.

IMMORTALS outclasses WRATH in making some attempt at a theme. But the later film bungles it so badly that the comparison becomes moot.


Posted by Gene Phillips at 3:04 PM
Email ThisBlogThis!Share to TwitterShare to FacebookShare to Pinterest
Labels: combative adventures, the marvelous