CHEECH AND CHONG'S THE CORSICAN BROTHERS (1984) 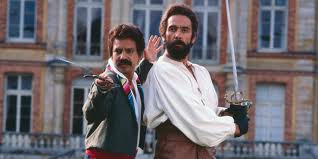 
My only interest in this clumsy comedy-- which I can't imagine finding humorous even if I watched it when stoned-- is the extent to which it mirrors the categories of a "straight" version of Dumas' "The Corsican Brothers," such as I elaborated in my review of the 1953 Dumas-knockoff THE BANDITS OF CORSICA. And in fact, this "stoner swashbuckler" would qualify for all of the same categories listed there-- the freakish sensory connection of the brothers, etc-- except for the fact that all of the metaphenomenal events of the story take place within a naturalistic framing-device.  Thus that makes the main events of the story "fallacious figments," though here they're much more elaborated than in the nonsense fantasy-throwaways one usually finds in such comedies.  In my previous discussions of the "delirious dreams and fallacious figments" trope, I've largely dealt with dreams, but I should note that when a fantasy-story told by a character in a naturalistic diegesis is sufficiently elaborated, it takes on the same status within this trope as a similarly elaborated dream.  Thus a dream-film like 1939's WIZARD OF OZ shares trope-space with this one-- though a far better example of the story-figment trope would be 1987's THE PRINCESS BRIDE.


I found most of CORSICAN (directed by Tommy Chong) relentlessly unfunny. I sometimes like vulgar humor, but this wasn't even up to the low level of the SCARY MOVIE franchise. It's of minor interest that Tommy Chong plays his character Lucien straight, showing a decent ability to fight against the repressive minions of the aristocratic villain "Fuckaire," while Cheech's "Louis" is a resolute coward with no fighting-skill.  Both are born in France, but in order to keep true to the duo's ethnic comedy-schticks, Louis has been raised in Mexico.  It's solely because Lucien is a good fighter that I label this a "combative comedy," though obviously far more emphasis is placed on jokes than on derring-do.


The "sensory exchange" concept of Dumas gets only indifferent treatment here.  The only decent joke appears at the end, when a wedding has been scheduled between the brothers and two princesses they've rescued (both of whom, incidentally, fight better than Louis).  Lucien is mysteriously absent, but Louis begins to get cold feet as he hears the young ladies discussing how they'll work on remolding their new spouses.  Then Lucien rides up on a horse and does a "Lohengrin" with his brother, snatching him away from the dire fate of marriage and off to new adventure.  This, and this alone, provides a decent satirical barb of the serious swashbuckler.
Posted by Gene Phillips at 12:53 PM
Email ThisBlogThis!Share to TwitterShare to FacebookShare to Pinterest
Labels: combative comedies, delirious dreams and fallacious figments (u), freakish flesh (u), the uncanny