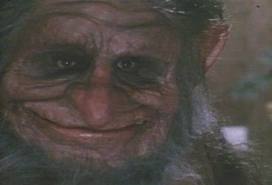 
I finally got around to re-watching the original TROLL, long after devoting a review and a lot of lit-crit theorizing to its epigone-in-name-only TROLL 2.

My original feelings toward the film were confirmed: though some viewers have called TROLL a "bad movie," it's fairly well organized.  Its goals are modest and it achieves them adequately, never attaining its quasi-sequel's delirious ventures into gratuitous meaninglessness.  The creative talents (one must call them that, I suppose) behind TROLL 2 claimed that they had never seen the 1986 film, and that they had always meant for their film to be called "GOBLINS."  I do find it interesting, though, that the titular monster of TROLL begins his reign of terror by taking on the form of little girl Wendy, and then acts out in outrageous ways that horrify the rest of Wendy's family.  Later, TROLL 2 involves the central character, a middle-school boy, who has to act out in outrageous fashion to try to keep his family from eating the food of the goblins.  But then, perhaps both films owe their terrible tots to the mega-success of 1973's EXORCIST film.

TROLL resembles one of those haunted-house movies where the ghost keeps knocking off members of some group of visitors one-by-one.  Here we have a "haunted condo," but the nature of the haunting is much more exotic than a simple ghost.  The troll who takes over Wendy's identity is one Torok, who, rather than killing most of his victims, seeks to transform these occupants of modernity into phantasms of a faery-tale past.

The parents of Wendy are little more than a standard mom-and-dad unit; the star of the show is the presciently named "Harry Potter Jr.," who initially resents the intrusions of his younger sister.  But as Harry discerns that tenants in the condo are undergoing weird fates, he begins to make connections between these events and his sister's bizarre behavior.  He only learns the truth because one of the condo-occupants is the "good witch" Eunice St. Claire (June Lockhart).  She reveals that Torok the Troll-- once a faerie in ancient days-- wishes to bring back the olden days of faerie.  Because 1986 offers a unique opportunity for cosmic re-alignment, Torok has decided to gradually transform each individual room of the condominium until he has created a small "pocket universe" of faerie-- full of unicorns, giants, and Tinkerbelle-style fairies-- which is capable of spreading forth and engulfing the rest of reality.

Eunice tells Harry Jr. all this because she believes his motivation to save his sister-- now imprisoned in the faerie-world-- will enable him to help defeat Torok.  As the film progresses toward its climax, Eunice gives Harry a magical spear and tells him to go into the magical world and destroy it by stabbing the spear into the biggest, ugliest creature he can find.

The setups with the victims of Torok provide the film's strongest moments, with Julia Louis-Dreyfus transformed into an ageless fairy, real-life dwarf Phil Fondacaro becoming a magical version of a "little person," and Sonny Bono turned into a plant (a dominant trope in TROLL 2, by the way).  Though the budget is limited, these are evocative enough to allow some viewers to accept the wild premise.

What doesn't work nearly as well is the climax.  Eunice's gives Harry a history-lesson about how Torok became a troll-- because he and his fairy-kindred tried to dominate humankind, an ambition sometimes attributed to the demons of the Christian hell. However, though Torok has no reason to care anything about humans, Eunice claims that the troll wants to keep one human-- Wendy-- as a specimen of her people after the World of Faerie devastates the human continuum.  This makes it possible for the audience to believe that Wendy is still alive and ripe to be rescued by heroic Harry, but the idea that Torok wants to play "extinct species curator" doesn't stand up to scrutiny.  It might have been more believable if Torok were seeking a replacement for the human-looking Eunice, who seems to have been a fairy from archaic times, since she was Torok's lover in those days.  I, at least, might have believed that Torok wanted to keep one human female around, whom he would then marry once she matured.

I might not make much of this point except that it figures so vitally into the climax.  Harry, despite being set up by Eunice to play giant-slayer, utterly fails the task, just as Eunice herself fails in her attempt to battle Torok's pawns with her magic.  The only thing that saves the world is Torok himself.  When the troll's gigantic pawn-- the one whose heart contains whatever spell keeps the faerie-world viable-- defeats Harry rather easily, the creature menaces little Wendy.  Torok rushes to protect Wendy and kills his own creature with the spear.  The spell is undone and most of the condo's inhabitants return to normal.  However, in keeping with the eighties' tendency for last-minute reversal-endings, the conclusion suggests that the condo still maintains a doorway into the perilous faeryland .


Harry Jr.'s failure to play hero, and Torok undoing his own plans, have a clumsy, improvised quality to them, as if the writer didn't quite know what effect he wanted.  Moreover, Eunice's powers seem to be variable.  Is there something that keeps her from spearing the giant herself?  Certainly her age shoudn't be a consideration, for in one sequence Eunice reveals that she can de-age herself (at which point she's played by June Lockhart's real-life daughter Anne).  But even in young form Eunice is rather easily defeated by Torok's minions, so she's not much better as a fighter than as a chooser of heroes.

Incidentally, though the story has the potential to be of the "combative type," in that it contains two magical forces that *could* come into conflict, the magic forces of Torok and of Eunice never come into significant conflict, and Harry Jr. certainly never provides the necessary heroic gravitas.  Thus in my established terminology TROLL is entirely "subcombative."

Posted by Gene Phillips at 2:24 PM
Email ThisBlogThis!Share to TwitterShare to FacebookShare to Pinterest
Labels: the marvelous