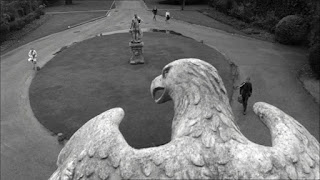 
It's been a while since I reread Fritz Leiber's novel CONJURE WIFE, but I'm not going out on too much of a limb to declare that of the three film-adaptations, BURN, WITCH, BURN! easily comes closest to the mark.

Obviously the movie's script-- by three genre-favorites (Charles Beaumont, Richard Matheson, and George Baxt)-- had to elide many of the more complicated aspects of Leiber's novel. However, the script, as well as the stylish direction of Sidney Hayers, are true to the core of CONJURE WIFE. It starts as a martial conflict between college professor Norman Taylor and his wife Tansy. Tansy doesn't seem to fit in with the other professors' wives on the small campus where Norman teaches, and he's largely deaf to her complaints about the hostility being directed against both of them by the entrenched faculty. Even before the main conflict between them erupts, Norman makes a remark about her unusual interest in primitive systems of magic, which he observed during their visit to Jamaica years ago. The mere fact that he would obsess about such a trivial detail shows Norman to be a staunch empiricist, though this version of the story doesn't emphasize the stature he acquired from writing an anti-superstition book, as did the earlier adaptation WEIRD WOMAN. The conflict heats up when Norman learns that Tansy has been secretly enacting witchcraft rituals in order to stave off malign influences. She even tells him that she used witchcraft in Jamaica to save him from a fatal illness. Norman is deeply offended, not only that a wife of his would countenance such irrational beliefs, but also that she doesn't think he earned his position at the college through his own efforts. In short order, he pressures Tansy into destroying all of her protective systems.

As in the novel, all of Norman's good fortune turns sour. Students and faculty-members who were mere annoyances become tangible threats, and a strange presence comes to the door, only to be banished by Tansy's efforts. Norman still does not believe, until Tansy performs a magic spell designed to attract the malign forces upon herself. As a result she almost drowns, but Norman, his love overcoming his sense of rationality, imitates one of her spells and manages to bring her back from the brink. However, the couple still have to deal with the source of the evil sendings.

There are some weaknesses in the script, probably the result of trying to cram Leiber's expansive concepts into a simpler plot. There's an early reference to one character being a hypnotist, which I don't recall from the novel. If this were an uncanny thriller like CALLING DOCTOR DEATH, one could easily understand the inclusion of this talent, as a setup to explaining the witchcraft in semi-rational terms. However, since there's no real viewer-doubt about the reality of the marvelous magicks taking place-- at least not after some unseen presence comes knocking on the Taylors' door-- this point seems irrelevant. The novel makes more of an idea that the villain, an older woman, wants to take over Tansy's body and her life, planning to cohabit with Norman without his knowledge. In the film, this trope is reduced to the villain briefly possessing Tansy's body and trying to kill Norman. I didn't mind that the villain was re-written so that she didn't have any erotic interest in Norman, but the script doesn't really give her any strong motive in its place. The story's worst failing is that, in a scene taking place after Norman himself uses magic to recover Tansy, he confronts the villain and tries to fall back on the idea that she's done it all through hypnotism.  Really?

The metaphysical aspects of the novel are played down as well, but at least they are present, in contrast to WEIRD WOMAN, and BURN certainly does a better job eliciting the psychological and sociological conflicts between the couple. 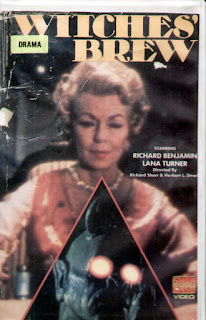 The first adaptation WEIRD WOMAN may have been a little dull, but at least it knew what formulas it wanted to follow, and did so in an adequate fashion. By comparison, I couldn't figure out what WITCHES BREW thought it was doing with the plot of CONJURE WIFE.

Once again, there's no doubt that the witchcraft on the campus is real from the get-go, but it's treated as the daffy hobby of the professors' wives, including Margaret (Teri Garr), wife of up-and-comer Joshua Lightman (Richard Benjamin). (NOTE: unlike BURN, there's not even a partial attempt here to keep any of the novel's characters or their names.) Vivian Cross (Lana Turner) is the one old witch who has darker plans hidden within her witchy ways, and this time they do include taking over the body of the good professor's wife, after he foolishly persuades her to destroy all of her magical wards.

I've seen WITCHES BREW labeled a "spoof," but it's an irony rather than a comedy, for everything in the film's world is rather idiotic, giving the viewer little reason to care about the heroes any more than the villains. This ironic detachment mirrors well the persona of Richard Benjamin, whose ennui seems to inform the performances of Garr and Turner as well, but Benjamin isn't credited as one of the writers. The script is credited to the film's co-director Richard Shorr, whose principal occupation was that of sound editor, and to Syd Dutton, who has no other writing-credits on IMDB but does have a slew of visual effects citations-- though, strangely, not on WITCHES' BREW. Another possible source of the detached attitude might be the film's other director Herbert L. Strock. But none of the works in Strock's writing'/ directing repertoire director really suggest this level of smarmy disinterest in the ostensible subject matter.

The nicest thing I can say about this tepid brew is that it has an engaging theme song by Lennie Bleecher and John Carl Parker.

Posted by Gene Phillips at 3:06 PM
Email ThisBlogThis!Share to TwitterShare to FacebookShare to Pinterest
Labels: the marvelous