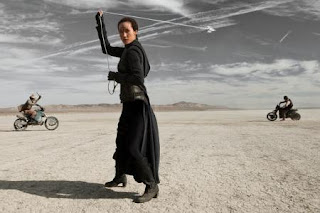 There's not much similarity between this film and the Korean comics-series on which it's said to be based. The comic-book PRIEST is very much a "weird western" story, taking place in some alternate-world version of 19th-century Europe and America. Demons and rogue angels are continually fighting one another in this world, often unleashing plagues of zombies. One demon makes a pact with Ivan Isaacs, the Catholic "priest" of the title, giving the former priest fabulous powers in order to battle the minion's of the angel's enemies. Though not all of the story takes place in the American West, "spaghetti western" tropes are seen in abundance.

Though the comic book is somewhat philosophically disorganized, the 2011 film has little interest in any philosophy, Catholic or otherwise. The story takes place in the future, and replaces angels, demons and zombie hordes with one primary menace, that of vampires. Prior to the film's main action, vampires have warred on humans for centuries. The human world, now governed by a Catholic theocracy, triumphs by somehow creating a warrior caste known as "Priests," who can leap great distances and wield mighty weapons. The Priests make it possible for humans to destroy most of the vampires and confine the rest to a reservation (though why any are left alive is never suggested). However, having won the war, the Priests-- all of whom seem to be called "Priest" if they're male, and "Priestess" if they're female-- are forced to re-integrate into society, while the theocracy continues to hold power over the post-apocalyptic society.

A sheriff from an outlying (and somewhat Western-looking) community seeks out a man known only as Priest (Paul Bettany), who, though he had another name prior to his ordination, is always called just "Priest." The sheriff relates that a new gang of vampires have killed Priest's brother and sister-in-law, and have absconded with his niece Lucy. Against the orders of his, er, order, Priest and the sheriff leave the city to investigate the vampire's new plot. On the way they also enlist the services of a surviving Priestess (Maggie Q), and eventually Priest learns that the vampires have also managed to suborn a new ally to their crusade against humanity.

The story is overly familiar, but the action sequences are often better than average, particularly in terms of the designs for the warriors' weapons and conveyances. The script is pretty timid about making any particular references to Catholic Christianity, and unlike the comics-character, Priest and Priestess have only vague visual resemblances to the Catholic image. The vampire menace is woefully under-characterized.

Posted by Gene Phillips at 3:21 PM
Email ThisBlogThis!Share to TwitterShare to FacebookShare to Pinterest
Labels: combative adventures, the marvelous