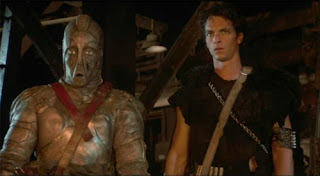 ROBOT HOLOCAUST is the first of Kincaid's miniscule output in the SF genre, and I'm amazed to read on IMDB that it apparently did show up in some theaters, rather than going straight to theaters. It almost goes without saying that it's a mind-numbing mix of formulas swiped from STAR WARS and MAD MAX, acted by people who couldn't act, filmed mostly underground (the basements of abandoned buildings, maybe?), and using ragtag outfits that even the addition of greater nudity could not make less abominable.

The basic idea is that after the usual nuclear apocalypse, many humans fled to the wastelands, but some stayed within a generic city. I guess the city's got a dome over it, or else the threats of the local tyrant, "The Dark One," to cut off people's air wouldn't come to much. The idea of an air-monopoly has a little promise, but the idea is rendered risible by the idea that some of the outsiders have mutated so that they somehow don't need air. Oh, and there's a brilliant professor who's somehow immunized himself and his lovely daughter from needing air to supply. Okay.

This is just barely a combative film by virtue of the struggles of the rebel leader "Neo" (no, not that Neo) against the Dark One. It's far too dull to be "so bad it's good." 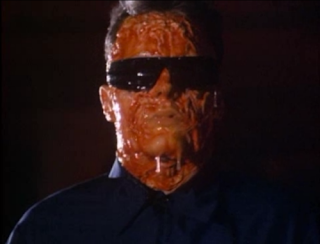 In contrast, MUTANT HUNT went straight to video, but it does at least boast some cheesy action sequences, and a lead who can act: Rick Gianisi, best known as Troma's "Sergeant Kabukiman." The plot concerns a mad scientist who begins dosing a troop of cyborgs with a new drug, so that they become sex-hungry maniacs. I lost count of the number of times the script uses the word "psychosexual."

Purely because of the fights and the occasional cyborg meltdowns, this one might be funny to watch for laughs, preferably when stoned. 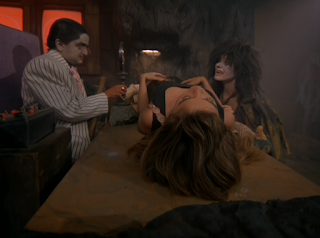 By contrast to these two cinematic canines, I found myself experiencing a mild liking for ALIEN FROM L.A., even though neither its director (Albert Pyun) nor its production company (Cannon) have been known for producing high-quality work. That said, Pyun, unlike Kincaid, does know how to produce a viable action-sequence, having initially made his mark with the derivative but lively CONAN knockoff THE SWORD AND THE SORCERER.

I don't know how much money Pyun had to work with, but he does end up pursuing roughly the same filming strategy as Kincaid: lots of filming in subterranean corridors. Wanda Sacknussem (Kathy Ireland) is a nerdy, squeaky-voiced Valley Girl who follows her lost father down to the Center of the Earth (where Jules Verne also placed another character with the name "Sacknussem"-- though that's all you get of Verne here). Wanda finds herself wandering around a grungy under-earth civilization that's supposedly the remnant of lost Atlantis, though the inhabitants look like they'd have been more at home in a Mad Max film.

Two things save this film-- which is by no means good-- from total tedium.

First, even though Pyun's dealing up a cut-rate Atlantis, the costumes are moderately good-looking in a trashy way. Pyun also knows how to keep his camera focused mostly on people's faces, which both distracts from the poverty of the production and makes the Atlantean denizens seem more sinister.

Second, Ireland, while no great actress, makes the character moderately interesting. One's ability to enjoy her character may stand or fall on whether one is amused by her faux-squeaky voice, but it worked OK for me. Her character is standard enough-- the shy nerd who has never really been able to emulate her adventurous father-- but in the early scenes Ireland does sell it fairly well, for all that you know she's concealing a supermodel figure under her klutzy clothes. Wanda wanders around the underground, making enemies and a few friends, and she does succeed in rescuing her father, though she remains an entirely subcombative character throughout.