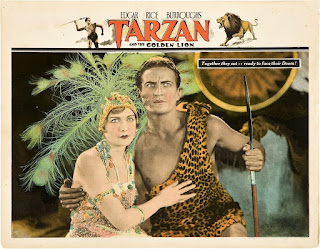 
This silent Tarzan film-- adapting (not very accurately) Edgar Rice Burroughs' 1923 novel of the same name-- was deemed lost for many years, but a French copy was found and duly released in subtitled form.

Though it's a handsomely mounted film, it seems to have been conceived as a more or less standard jungle-adventure in which Tarzan and his wife Jane are inserted with cumbersome effects. Actor James Pierce was selected by Burroughs for the role of Tarzan, but Pierce proves a stiff and uncharismatic hero for modern tastes (though Burroughs' own daughter married the fellow, and he did continue to act for many years). Though the novel includes many melodramatic twists and turns, some of which call upon the ape-man to rescue his equally famed mate, Jane has little to do in the 1927 film. She, Tarzan and Tarzan's sister-- a character invented purely for this film-- participate in a caravan seeking a legendary city full of diamonds but inhabited by sun-worshippers with a bent for human sacrifice.

Surprisingly, the narrative focus seems to be on sister Betty Greystoke-- seen in the still above, being rescued by her brother while she's garbed in her sacrificial regalia. Betty also has a romance going with one of the white hunters. This was a plot-thread that Burroughs had used in other books: once Tarzan and Jane were safely married, the author often created subplots that threw another heterosexual couple into one's arms. However, though that seems to be the intent of the film's early part, Betty's romance with the white hunter never becomes nearly as important as her role as the Girl Tarzan Saves.

The sun-worshipers are just a standard tribe of savage natives, whose origins are not explored, and the climactic action scenes are no better than fair. The one major plot-thread taken from the novel-- that a man resembling Tarzan impersonates the ape-man for a time-- is underused in favor of meandering jungle scenes. Boris Karloff has a small role as a bad native, but he has no scenes of moment. Two years later, there appeared a far better Tarzan film, TARZAN THE TIGER. It not only portrayed a much more charismatic hero, it also made use of the same tribal villains that had appeared in the GOLDEN LION novel, and who were tossed aside in this film for a bunch of bland sun-worshipers.
Posted by Gene Phillips at 3:50 PM
Email ThisBlogThis!Share to TwitterShare to FacebookShare to Pinterest
Labels: exotic lands and customs (u), outre outfits (u), superlative skills (u), the uncanny