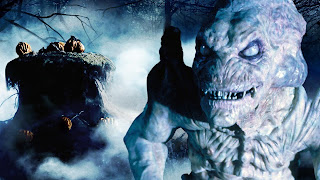 Like 1981's THE HOWLING, the original PUMPKINHEAD is a touchstone for the 1980s FX-advances. Effects-wizard Stan Winston, directing a film for the first time, had already become well known for his inventive designs, and the titular monster may be his best creation. Winston also collaborated on the story, which is just fair of its type.

Through a prologue, Winston establishes that a demon called "Pumpkinhead" has become a legend in an unspecified part of America's "hill country," and that the demon can be summoned to avenge wrongs. Focal character Ed Harley (Lance Henriksen) manages a small country store with his young son, and their life seems peaceful if unremarkable.

As in many other films about rural terrors, trouble starts when big-city outsiders appear on the scene. A group of city-kids show up at the store, planning to ride their motorcycles in the country. In contrast to some rural flicks, most of the kids are reasonably nice types, but there's one bad apple in the bunch, and he accidentally runs down the young son with his bike, with fatal results. The vengeful Harley seeks out an old witch, and, following the exhumation of a body from a pumpkin-patch / graveyard, the witch sends Pumpkinhead forth to kill all the city-kids.

Winston proves a decent if not extraordinary director, and he keeps things looking spooky and sepulchral at all times, with snatches of "hillbilly music" to give the story local color. Henriksen, though, is the only actor who acquits himself well here, but admittedly he's the only one given a strong character-arc. The old witch doesn't tell him in advance that he'll suffer a sort of Corsican Brothers sympathy with Pumpkinhead whenever the demon kills one of his targets, and so Harley turns against his pawn-- though not before most of the city-kids are knocked off. 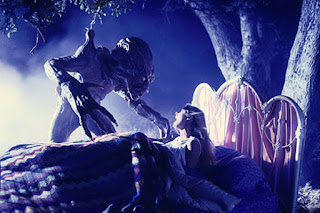 The sequel is a more mixed bag. Visuals under the direction of Jeff Burr are generally dull, sort of "JAWS II" next to "JAWS." However, the story starts out with an interesting new direction. About 20 years prior to the film's main story, Tommy, a deformed teenager, haunts the woods, being fed by an old witch-woman (no relation to the witch of the first film). Wikipedia claims he is the spawn of Pumpkinhead himself, but that's not beyond doubt: all we here is some mythology claiming that deformed people are often thought to be the result of demon-human mating. Certainly Tommy has no demonic powers when he's assaulted by a group of local louts. who end up killing him. The witch claims his body and buries it, but takes no action against Tommy's murderers.

Twenty years later, the killers are all respectable men in a particular rural town clearly modeled on the beach-city in JAWS (right down to both having a mayor who worries about the impact of monster-hunting on local commerce). The focal character this time is Sheriff Braddock, who was formerly a resident of the town, moved for a time to the big city, and who has now returned to his old roots, along with his daughter. The daughter falls in with some trouble-making teens, and it's their actions that lead to the recrudescence of Pumpkinhead-- although the script is muddled on this point, giving both the teens and the old witch credit for the demon's resurgence.

As if trying to avoid the program of the earlier flick, the demon doesn't immediately go after the teens; instead it starts chasing down the killers of its its formerly mortal body. It seems to take its time about it, too, giving Braddock and the teens plenty of scenes in which they puzzle over the unexplained murders.  The somewhat sedentary film only comes alive when Pumpkinhead kills someone, and though there's a little more potential for individual characterization, the script doesn't take full advantage of said potential.

Posted by Gene Phillips at 2:47 PM
Email ThisBlogThis!Share to TwitterShare to FacebookShare to Pinterest
Labels: the marvelous