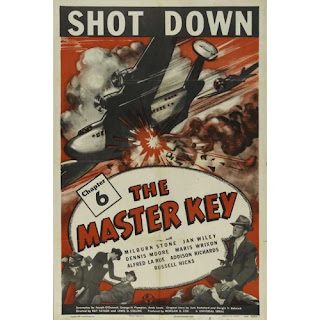 In my review of SHAOLIN BROTHERS, I observed that the film maintained two plotlines-- one marvelous, one naturalistic-- which never came together, at least in the English version. I wrote:

In SHAOLIN, the real vampires have no effect whatever on the main story, and so I've come up with a new category for this sort of metaphenomenon: the "peripheral-marvelous."


This serial came very close to having the same bifurcated phenomenality, with a "naturalistic" core story and peripheral marvelous content. MASTER KEY, appearing in theaters in April 1945, concerns government agents in America seeking Nazi spies back in 1938. The Nazis, working under a mysterious figure called "the Master Key," are trying to obtain the scientific breakthrough of Professor Henderson, whose "Oroton Tubes" can harvest raw gold from the ocean, presumably without spending more than one uses for the harvesting-techniques. Despite the efforts of G-Man Tom Brant (GUNSMOKE's Milburn Stone in his salad days) and his aides, the spies do capture Henderson, but the scientist fears being killed if he simply gives up his secret. He cooperates only to the extent of buying time with requests for the materials to build the Tubes. Thus, as in many serials, both good and bad guys are sent chasing after any number of McGuffins. The idea of a gold-making device is sufficiently advanced that it registers as a marvelous phenomenon, although one doesn't see it in action more than once or twice. Aside from providing the Nazis and their enemies with their motives for fighting, the Tube-machine is peripheral to the main action. Even the death-ray in BLAKE OF SCOTLAND YARD, used only twice in the film, gets more emphasis.

So Brant fights the servants of the Master Key amid blazing guns, flying fists (though not many fight-scenes here) and cliffhangers, usually cadged from previous serials (as is the music, swiped alternately from 1941's WOLF MAN and 1943's FRANKENSTEIN MEETS THE WOLF MAN.) However, although the villains are led by a mastermind with a fancy name, the Master Key does not literally appear on screen for the majority of the serial. Rather, the underlings simply receive their orders from him via radio-conferences. 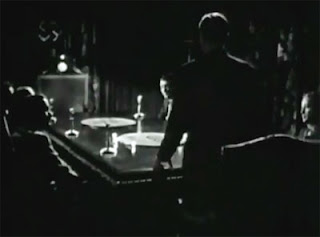 Merely having a weird name and a creepy voice is not enough to propel a narrative into the domain of the metaphenomenal, as I asserted in my review of these two serials, both of which include a mystery villain who also communicates with henchmen via radio, and who in both stories takes the sobriquet "The Voice." For twelve of MASTER KEY's thirteen serials, the Master Key makes no appearances, costumed or otherwise. Then, in the very last chapter, the villain appears in a masked outfit-- nothing very fancy, but enough to qualify her (yes, I gave it away) as a genuine "masked mastermind." Thus the serial does use, very belatedly, the "outre outfits" trope. 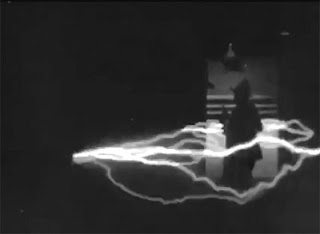 Also tossed in, nearly at the last moment, is an "outre device," when the spies attempt to lure Brant into an electrical trap. This is much more mundane technology than a gold-harvesting machine, but it's also just bizarre enough for me to consider it within the domain of the uncanny.

So why is my phenomemality-category still bifurcated? In essence, though the masked mastermind and the zap-trap seem like last-minute additions to the story, they are still *centric* to the story, whereas the gold-machine is truly *peripheral."

Back in January I rated two obscure "spooky westerns" as uncanny because their stories did include owlhoots pretending to be ghosts, even though the spectral impostures were really pathetic. However, on further consideration, since the main action in these flicks is that of a naturalistic hero fighting naturalistic villains, then by the rule I've elaborated they too might best be classified with a bifurcated phenomenality, just because the uncanny dingus has no direct influence on the narrative, just as the marvelous in MASTER KEY could easily have been a new bomb-sight or the like.
Posted by Gene Phillips at 1:28 PM
Email ThisBlogThis!Share to TwitterShare to FacebookShare to Pinterest
Labels: combative adventures, diabolical devices (u), outre outfits (u), the uncanny