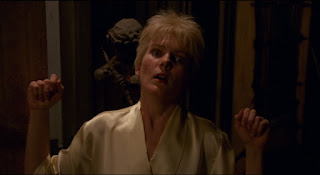 "The past is never really the past. It stays with me all the time."-- Norman Bates, early in the film.


One of the few rewarding aspects of watching sequels is their occasional defiance of entropy. In the majority of cases, an excellent first film is followed by follow-ups that are either progressively worse or identical in their unremarkable qualities.

PSYCHO III is the rare film to buck the trend; by making a silk purse out of the ordinary sow's ears of PSYCHO II. The third film in the franchise takes the gimcrack plot-devices of Film Number Two and finds a way to meld them with something closer to Hitchcock at his darkest. This 1986 film is no classic like PSYCHO, but in addition to returning Norman's story to the Fryean mythos of irony-- where everyone, not just Norman, is fundamentally crazy-- it does so by building on the tropes that Hitchcock and Stefano refined from the Robert Bloch novel. Scripter Charles Edward Pogue, best known for his work on the 1986 FLY, may deserve a great share of the credit. However, I tend to credit the film's rich visual style to Anthony Hopkins, this time occupying the director's chair in addition to reprising the central role of Norman Bates. The look of the film is excellent, and given that cinematographer Bruce Surtees had produced largely generic-looking work prior to PSYCHO III, I'll advance the possibility that Hopkins was responsible for masterminding the film's look and tone. No doubt, given that Hopkins had been somewhat typed by his PSYCHO fame, the actor-- who only directed one other film-- hoped to increase his fortunes via the association. Unfortunately, PSYCHO III did not fare as well in the box-office as the mediocre second entry, so I don't imagine Hopkins' career prospered as a result of this installment.

The story picks up about a month after Norman has been cleared of the murders committed by his supposed "real mother," Miss Spool, and also after Norman has secretly murdered her, stuffed her as he did with the woman he'd previously considered his mother, and went back to having argumentative conversations with the "mother in his head."  Yet, just as PSYCHO began with one of Norman's victims rather than the psycho himself, PSYCHO III starts out by introducing the viewer to Maureen Coyle (note the initials, identical to those of Marion Crane). Maureen is a troubled young woman first seen in the attire of a postulant nun. In an opening somewhat reminiscent of a concluding scene in Hitchcock's VERTIGO, Maureen tries to leap to her death from the top of her nunnery, yelling that "there is no God!" Several nuns try to corral the potential suicide, with the result that one of the nuns falls to her death. Later Maureen, clad in commonplace clothes, leaves the nunnery on foot with her suitcase, and is soon picked up by a driver, a wastrel named Duane. Duane gives her a ride for a little while before trying to take advantage of her, forcing the former nun to flee again.

Both Maureen and Duane then enter the orbit of the Bates Motel. Duane, low on cash, answers an ad placed by Norman to help manage the motel, which has become a little more profitable since the first movie. Maureen makes her way to the neighboring town, looking for a place to stay, but before she arrives at the motel, Norman meets a new nemesis: Tracy Venable (note similarity to a family-name in Williams' SUDDENLY LAST SUMMER). Tracy is an aggressive reporter seeking a story on Norman, and she makes common cause with the money-hungry Duane, to find out whether or not Norman has truly been reformed.

Norman, of course, is back in full mother-mode, his mania if anything further aggravated when he meets Maureen. Though she doesn't look much like Marion Crane, Norman sees her initials on her suitcase and makes the connection. He gives her Marion's old room at the motel, Number One, and soon the reborn "Norman-Mother" is on the loose again.  However, instead of taking a shower Maureen takes a bath, and opens her wrists in it. Seeing the threatening woman already dying throws Norman back into his normal persona, and after doffing his maternal guise, he takes Maureen to a hospital and town, thus saving her life.

Not that this cures his tendency for bloodbaths. After Maureen has been released from the hospital and has returned to the motel, she and Norman begin a tentative relationship. However, this activates the psychotic belief that Mother will be pathologically jealous of any female rival, and so Norman's wrath falls upon another "loose woman," and then another days later. Both bodies are concealed so that the law only lists them as missing, but reporter Tracy continues to investigate Norman's peculiar history. Duane, looking for more lucre, finds the mummified body of Miss Spool and tries to extort money from Norman. Suffice to say that for once, Norman doesn't need to change into "Mother-Man" to kill someone.

Tracy then learns a bit of news that reverses the turnabout of PSYCHO II's script: Miss Spool was not, as she claimed, Norman's mother. That honor belonged to the original Mrs. Bates (who would not be seen in a "live" flashback until the last film in the franchise, PSYCHO IV). Miss Spool was indeed sister to Mrs. Bates, but she was also in love with Norman's married dad. She both killed her would-be lover and briefly abducted baby Norman in the belief that he was hers: this got her put in the nuthouse. This reversal has the advantage of explaining how easy it was for her to start down the slasher-path in Part 2, as well as making Norman's relationship with his main parental figure genuinely Oedipal.

Maureen almost succeeds in forming a romantic bond with Norman, but by sheer accident, she meets the very death she'd courted earlier. Norman goes round the bend, menacing Tracy as the reporter tries to reveal the truth to him. As a further irony, Tracy-- the least sympathetic major character in the film-- is spared when Norman chooses to turn against the image of the mother who has possessed him-- although by the denouement, it's by no means clear that he's managed to win free, as he claims. 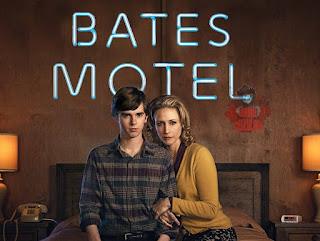 I don't have much to add about the first season of BATES MOTEL, recently re-screened, since I've not yet screened the other seasons. It is, unlike the film-franchise, a purely naturalistic dramatic series, with lacks even the uncanny aspects of the inferior second and fourth films in the series. Perhaps taking some inspiration from PSYCHO IV, Norma Bates in the opening episodes is far more intense-- though not quite psychotic-- than she is as represented in the first three films. It's a competent enough melodrama, though it adds elements of organized crime to the bucolic mix that never quite fit the PSYCHO mythology. The performances of Freddie Highmore and Vera Farmiga are uniformly excellent, but the producers are really not interested in exploring the dark corners of Norman Bates' mind, much less in inquiring into what he represents: the tendency of all humans to become caught in what Norman calls "traps"-- which in turn represent the human tendency for delusion and darkness.
Posted by Gene Phillips at 3:06 PM
Email ThisBlogThis!Share to TwitterShare to FacebookShare to Pinterest
Labels: perilous psychos (n), perilous psychos (u), the naturalistic, the uncanny