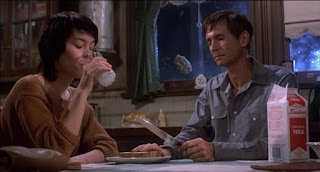 One thing I'll say in favor of PSYCHO II is that it's a better follow-up than the 1998 remake of the Hitchcock film, both reviewed here.

In 1983 both writer Tom Holland and director Richard Franklin had racked some fair credits in the genre of horror: the former wrote THE BEAST WITHIN and the latter both wrote and directed ROAD GAMES. Arguably Holland went on to greater heights within the genre, writing and directing the original outings for both FRIGHT NIGHT and CHILD'S PLAY. So it seems likely that both men, quite aside from their knowledge that the Hitchcock film was an avowed classic, knew that it was one of the films that made the horror genre relatively popular with mainstream audiences in the 1960s.

In my review of the 1960 film I opined that it fell into the Fryean category of "the irony," in that it offered a bleak and almost pointless view of human existence. Holland and Franklin were not interested in showing the skull beneath the skin: what they've rendered is an efficient thriller with a little more gore than the 1960 film. perhaps as a selling-point to the then-current rage for slasher-films. Because the film is more interested in exploring the interactions of the characters rather than their function within a cruel universe, PSYCHO II is not an irony but a drama, closer in spirit to other Hitchcock works, notably his breakthrough success THE LODGER.

Twenty-two years after the events of the Bates Motel, Norman (Anthony Perkins) is judged sane by his psychiatrist and is released into society once more. Lila Loomis (Vera Miles, also reprising her role from the original film) protests Norman's release, because her sister Marion was killed by the mother-fixated psycho, but her protests avail nothing. Norman takes up residence at his old home next to the motel. The motel is now run by a manager appointed by the hospital, but strangely Norman does not encounter him upon his return. Instead, on the advice of his psychiatrist, Norman takes a job in town at a diner, working as an order-cook. Norman spends the day learning the ropes of the new job, and makes the acquaintance of a winsome young woman named Mary (Meg Tilly). By day's end she lets him know that she has no place to stay, so gallant Norman invites her to stay at the motel. Only that night does Norman conveniently meet the new manager, who has turned the no-profit business into a "no-tell motel." Norman, heartily offended to find his quaint hostel turned into a refuge for the sex-and-drugs crowd, expels the manager. A day later, he almost comes into violent conflict with the aggrieved ex-employee-- and the same fellow is killed, and his body hidden so that no one but the audience knows of his demise.

Norman finds himself gaslighted by notes and phone calls purporting to come from his dead mother, and soon he quits the job, intending to manage the motel full-time. Mary continues to stay at the house in a non-romantic relationship, but there always remains the possibility that sex-phobic Norman will "cut loose" once more, so that these scenes communicate the greatest tension in the film, in part due to the strong chemistry between Perkins and Tilly. However, this time the woman's the one with the secret: Mary is the daughter of Lila, and the two of them have been conspiring to drive Norman back to the nuthouse. However, neither of them is the mystery-murderer. The Big Reveal as to the true killer's identity doesn't track all that well logically and, as I recall, is mostly ignored by the next two sequels in the franchise.

It's interesting that PSYCHO II comes close to duplicating the progress of the first two FRIDAY THE 13TH films. The original FRIDAY THE 13TH only suggests the presence of Jason as a killer and reveals that it's actually his mad mother; the sequel then brought Jason into play as the ongoing horror-icon. The monster of the original PSYCHO starred a boy who was a bit too attached to his mother, and PSYCHO II comes close to promoting the idea of "Norman's mom" as the real monster. However, the denouement of the film eliminates any possibility that anyone but Norman would be the Master of Bates (heh).

Hitchcock's films tended to vary between stories that uncovered the quiet horror of life, and stories that were just efficient, if mechanical thrillers. In essence, Franklin and Holland focused only upon the thriller-aspects of the original PSYCHO, and failed to delve into anything deeper.

EDIT: I've now re-screened PSYCHO III, and have to admit that this second sequel, rather than ignoring the Big Reveal of Part II as I wrote above, actually reverses it, in order to bring the Bates mythology back to its original configuration.
Posted by Gene Phillips at 3:19 PM
Email ThisBlogThis!Share to TwitterShare to FacebookShare to Pinterest
Labels: perilous psychos (u), the uncanny