The announcement of the U.S. version of GODZILLA stimulated other producers to try their hand at the giant monster genre. 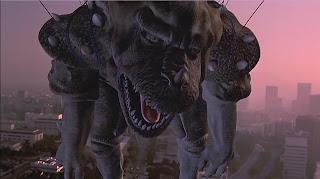 Released in South Korea the year after the debut of the Americanized monster, REPTILIAN was a very broad re-interpretation of South Korean's only giant-monster of the 1960s, YONGARY, MONSTER OF THE DEEP.  The earlier film emulated the popular Godzilla franchise in most respects, having a titanic prehistoric creature resurrected by atomic testing. On the whole, that film was small beer next to the work it imitated.

In contrast, REPTILIAN, crewed by South Koreans but acted largely by Americans, easily ups the game of the sadly derivative 1998 GODZILLA. I remarked in my review that even though the film had a fair share of violence, it couldn't be called combative, because Ameri-Godzilla spends so much of his time running away from jet planes and other modern technology. The American producers, it seems, simply couldn't countenance the idea of a giant animal that could ward off rocket-fire.

The new version of Yongary-- usually rendered "Yongarry"-- is full of combative action, and should satisfy the hardcore Godzilla-lover in that the big critter easily withstands the bullets and bombs hurled at it. To be sure, the creature is under the control of evil aliens, and they've provided their big pawn with a force-field. So maybe the producers threw that in as a sop to modern disbelief. Nevertheless, the visual effect of Yongarry's near-invulnerability beats any comparable scene in '98 GODZILLA.

The human characters are largely forgettable, and are supplied with some truly risible dialogue Yongarry is resurrected along with an ancient written prophecy, though I never figured out who authored the prediction-- not only that Yongarry would arise, but also that he would fight another big monster like himself. Toward the film's end an American soldier frees Yongarry from the aliens' control, so the invaders unleash another big creature on the city. Yongarry wins the contest and the aliens depart.

It's a very silly monster-flick, but because it's done with a lot of energy, it's a much better salute to the Golden Age of Kaiju than the American outing. 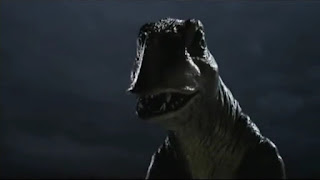 In contrast, 1998's GARGANTUA is a dumbed-down version of 1961's GORGO. A biologist and his semi-estranged son come across a small upright-walking dinosaur, looking a bit like a big ambulatory tadpole. The son bonds with Little Gargantua, much to the concern of his father. Then the little one's parent-- I forget whether it was father or mother-- comes looking for its offspring. However, Big Gargantua has even less going for him than Ameri-Godzilla. In his initial contact with the local military, he only manages to kill one or two soldiers before the big guy is slain by their gunfire. The main focus of the story returns to the human father and son, who seek to return the little one to the seas before unscrupulous exploiters can capture Junior.

Pretty much a bore all the way through, and certainly not in the combative mode.
Posted by Gene Phillips at 4:33 PM
Email ThisBlogThis!Share to TwitterShare to FacebookShare to Pinterest
Labels: combative dramas, the marvelous