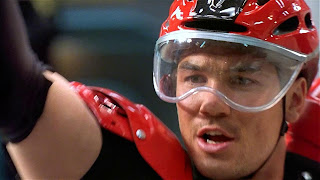 I was not a great fan of the 1975 ROLLERBALL, with its attempt to meld Orwell's 1984 with the staid intellectual's aversion to a supposed "bread and circuses" culture.  And on occasion, when a given film seems overly self-important, I've even enjoyed seeing it get ripped off by a dumb pop-culture imitation.

Not this time, though. Despite some serious money behind the scenes, FUTURESPORT manages to copy the main plot of ROLLERBALL without adding anything of its own. Again we have one single sport that has, in a future society only about 20 years from the present, pushed all other sports out of American consciousness. (At least FUTURESPORT doesn't extend this development to the whole world, as ROLLERBALL did.) Again, the popularity of the new sport invites politicians to use it, very improbably, to settle their arguments. Here, for reasons never articulated, Hawaii wants to secede from the U.S.

The foremost American player of Roll-- I mean, Futuresport is Tre Ramzey (Dean Cain). He's an arrogant prick, and somehow, long before any government start betting the farm on The Big Game, the Hawaiian secessionists target him for an attack. He and his team-buddies use their combat-skills to trounce the terrorists. This incident,if anything, pumps up Ramzey's ego even more, so that he starts showboating on the Futuresport ball-court, failing to give them support when needed. Ramzey's ex-wife Alex (Vanessa Williams) busts his chops for this, which leads the fractious duo to become a couple again. At some point Ramzey gets religion and begins working with the team as its coach, paying more attention to teamwork in time for the Big Game that will decide whether or not Hawaii can secede from the union.

Wesley Snipes, listed as one of the producers, has a small role here, and since he was an A-list star at the time, I'd bet that this TV-film was a financial investment for him. Neither he nor anyone else puts much effort into their acting, though Williams brings a certain conviction to her part, and even gets a little bit of fighting alongside the sports-heroes. The action-scenes are watchable but nothing more.

Posted by Gene Phillips at 3:54 PM
Email ThisBlogThis!Share to TwitterShare to FacebookShare to Pinterest
Labels: combative adventures, the marvelous