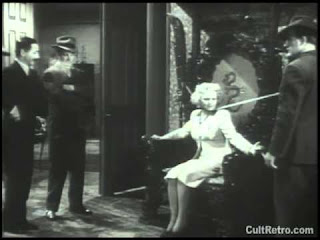 
These two serials are similar in that the majority of the action in them is strictly naturalistic, but each of them tosses in a few gimmicks that propel both of them into the domain of the uncanny.

In earlier years I'd seen G-MEN VS. THE BLACK DRAGON in a re-edited TV version. Now that I've seen the entire film, I'd say that it ranks with the best of the sound serials. True, it doesn't have a really memorable starring hero, like THE ADVENTURES OF CAPTAIN MARVEL, or starring villain, like the MYSTERIOUS DOCTOR SATAN. But like most of the serials directed or co-directed by William Witney, G-MEN delivers a great variety of well-mounted action scenarios, some of which are pleasingly shot on location rather than on studio sets.

During the height of WWII, G-Man Rex Bennett (Rod Cameron) is assigned to seek out agents of the infamous Black Dragon espionage society. This spy-ring is bent on acts of sabotage, directed by its mastermind Haruchi (Nino Pepitone), who's smuggled into the U.S. inside a mummy case. Aiding Bennett throughout the serial is a resourceful female agent, Vivian (Constance Worth, memorably seen wielding a machine-gun against some thugs) and a Asian fellow named Chang Sing-- though the latter character doesn't do very much after the early chapters. He may have been introduced largely to remind American audiences of the period that not all Asians were identical with the nation's Japanese enemies-- though the opening chapter of the serial does itself no favors in modern eyes by boasting the chapter-title "The Yellow Peril."

That said, in contrast to some of the more notorious wartime films-- notably the first BATMAN serial, which came out the same year-- there's no racial derogation of the Japanese, though Haruchi is not played by an Asian (unlike the aforementioned Chinese agent) and his main servants are Caucasians. If anything, the Black Dragons seem a pretty formidable bunch, and in one episode the husky Bennett has a lengthy struggle with a smaller enemy agent, who equalizes the size differential with judo moves.

As for the gimmicks, Haruchi avails himself of three. A Black Dragon uses a pen full of knockout gas to stun a guard, and one of his agents employs a trained raven whose talons have been poisoned to get rid of yet another guardsman. I have to mention one of the serial's death-traps not because it's uncanny, but because it's a hearkening back to the silent serial era: Haruchi's men tie Vivian to a sawmill-like contraption and threaten to split her differences. However, Haruchi also puts together his own more ingenious trap in one of his hideouts-- an "infernal machine" set with a timer so that at a certain point it will shoot forth a metal spear to impale a bound victim-- Vivian again, seen in the above still waiting for her fate.

Cameron is quite good as the practical-minded, square-jawed hero, and Worth provides a fine backup. Pipitone's villainous spy, however, is more than a little monotonous, and the actor's performance gives no evidence that he sought to emulate the sound of real Japanese speaking English. 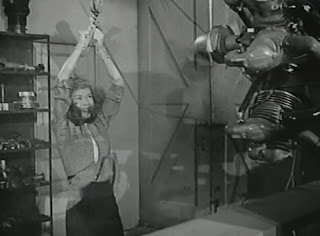 The postwar serial FEDERAL OPERATOR 99 turns from war to crime for its thrills. For almost all of its 12 chapters, the serial concerns the adventures of the titular Operator 99, Jerry Blake, to ferret out the robbery-schemes of master criminal Jim Belmont. In addition to the fact that hero and villain possess the same initials, the British-sounding Blake is a bit more elegant sounding than the standard staccato-sounding American serial lead-- and this accords with the portrait of Belmont, a sophisticated thief and killer who likes to lay his plans while playing classical music. Unfortunately, all he seems to know how to play is Beethoven's Moonlight Sonata, which lends a certain sameness to each of Belmont's planned transgressions.

Only in one chapter does Belmont depart from naturalistic depredations-- like the one in the still above, where the heroine is menaced by a spinning airplane propellor. Belmont lures Blake to a special chamber, wherein one wall is transparent, Blake shoots at Belmont, only to find that the glass is bulletproof. Thus Belmont can watch the destruction of Blake, after Belmont sets off a device that causes the sealed room to go up in flames. The hero escapes, of course, but the cremation-room is still one of the more memorable serial death-traps, though a little out of line with the mastermind's usual modus operandi.

Both serials are strong in terms of offering lots of fistfights and gun-battles, but G-MEN does succeed a little better in terms of sheer style.
Posted by Gene Phillips at 2:43 PM
Email ThisBlogThis!Share to TwitterShare to FacebookShare to Pinterest
Labels: combative adventures, diabolical devices (u), the uncanny