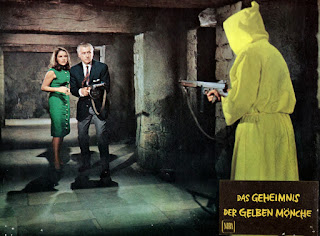 
TARGET FOR KILLING-- known under many titles, including one that alludes to the yellow-robed monk in the above still-- is one of the better low-budget Eurospy films of the 1960s, though purely in terms of offering some simple visual treats while killing time.

While TARGET is not a comedy, the script often includes bits of ludicrous business. The hotshot government agent "Jimmy Vine" (Stewart Granger), flying to Germany to locate a mysterious spy-chief known as the Giant, makes the acquaintance of Sandra, one of the Giant's "targets for killing," when the pilots jump out the plane with the intent of letting everyone aboard perish. Later, Vine makes a pretense to a stranger about being an expert on snakes, and the stranger promptly puts Vine in the position of handling a poison serpent. Throughout the film there are references to the Giant having some special method of brainwashing people to join his cause, and it turns out to be a combination of plain old hypnotism and the weird idea of shocking victims with electric eels-- a bit of ingenuity that rivals, but does not quite pass, the goofy "goldfish-bowl" device seen in the serial SHADOW OF CHINATOWN.

Director Manfred Kohler may be best known to American film-hounds for his writing on Euro-thrillers like BLOOD OF FU MANCHU. In his day he didn't do a lot of directing, but here he keeps the action lively enough: fights, daredevil escapes-- all on a budget of course, but still some scenes show imagination, as when the villain's henchwoman uses a machine gun to pepper the walls around a female victim, scaring the hell out of her but not actually killing her. However, most Bond-fans will like the film mostly for its casting, as it brings together several veterans of the Bond franchise-- leading lady Karin Dor (singularly bland), Adolfo Celi, and Molly Peters-- and one actor who would only make a Bond-film later, Curt Jurgens.
Posted by Gene Phillips at 3:39 PM
Email ThisBlogThis!Share to TwitterShare to FacebookShare to Pinterest
Labels: combative adventures, diabolical devices (u), enthralling hypnotism and illusionism (u), outre outfits (u), the uncanny