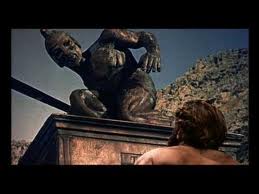 In my review of Ray Harryhausen's 1958 SEVENTH VOYAGE OF SINBAD, I mentioned that I'd come across a hostile film-review which asserted that Harryhausen's type of films weren't about anything but piling wonders on top of one another.  This was written long after Harryhausen's heyday in film, but it's possible that he and/or his longtime producer Charles Schneer heard similar dismissive comments even after the success of the first SINBAD film.

By accident or design, the 1963 JASON seems like an attempt to channel Harryhausen's genius for visual effects away from outright juvenilia like SEVENTH VOYAGE and MYSTERIOUS ISLAND, and toward a more "prestige" production-- albeit one that would not lose the juvenile, wonder-loving audience.  In contrast to the "Sinbad" stories of the ARABIAN NIGHTS, which belonged more to folklore than literature, the ARGONAUTICA of Apollonius was a genuine literary work of the classic era.  Even a free-form adaptation of such a work-- and JASON certainly is such-- bids comparison with other cinematic adaptations of religious narratives and literary epics, such as 1961's EL CID and 1962's SODOM AND GOMORRAH.

I could say that my extrapolation is based largely on my perception that the script, direction, and musical score for JASON all suggest to me a greater sense of thematic gravity, as well as an appreciation for the monolithic qualities of literary epic.  But what most suggests "prestige" to me here is that Schneer and Harryhausen accepted a script which leaves the story of Jason's quest unfinished.

In most pop culture films of the period, it was rare-- though not impossible-- for the villain of the story to escape, unless there was a very good chance of a sequel in which the hero would get another crack at him.  JASON begins with the prophecy that the hero will conquer the evil Pelias, the murderer of Jason's family, but the film ends with Jason overcoming a substitute tyrant, and with the suggestion that Jason will have other adventures.  Had there been a JASON sequel, presumably Pelias would have met the usual dire fate of evildoers.

Why did Schneer and Harryhausen pursue this strategy?  Certainly it would not have been impossible to devise a "Reader's Digest" version of the Argonautica, in which Jason would leave Argos with his crew, have a few adventures at sea, steal the Golden Fleece from Colchis and its ruler Aeetes, and return to finish off Pelias at the climax.

Various reasons suggest themselves.  Had JASON been successful enough to prompt investment in a sequel-- which it was not, unfortunately for Harryhausen fans-- then the mention of "future adventures" at the end of JASON would have helped "pre-sell" the sequel.  Additionally, the script was certainly molded by the sort of effects Harryhausen most wanted to execute-- and frankly, the conclusion of the original epic, wherein Pelias meets his fate, is pretty light on wonders and marvels.  Harryhausen's wonder-working instincts may have told him to end the film on a high note, in the fantasy-land of Colchis.

But even with these alternate scenarios in mind, I still suggest that it was important to Schneer and Harryhausen to impart a "high seriousness" to JASON.  The film begins in Jason's infancy, in which the villain Pelias slaughters the hero's family under the delusion that the gods have sanctioned his actions.  Twenty years later, he meets Jason as a young man-- though Pelias conceals his identity-- and conceives a scheme to send the hero off to fetch the Golden Fleece as a means to get rid of him.  In most pop-culture tales of this sort, Jason's motives for finding Pelias would be revenge and nothing but.  But the script gives Jason nobler motives: he recognizes that Pelias has made the land he rules into a corrupt wasteland, and the hero wants not to just to avenge his personal grievances, but to redeem the land of his father's people.  The imagery of a wasteland in the living world will be mirrored by Jason's journey to Colchis, which in many interpretations is essentially the land of the dead.

The assemblage of heroes-- the sort of thing that would be severely adumbrated by most catchpenny Italian fantasy-films of the time-- is given a great deal of attention, even if various details are altered, as when the Argonaut Acastus becomes a secret agent for Pelias in order to create suspense for the viewing-audience.
Jason's awe before the gods-- in whom he does not initially believe-- is tempered by his desire that men should stand on their own feet, while Zeus and Hera reveal a doleful awareness that someday this will come to pass.  Though large sections of the ARGONAUTICA are naturally omitted, the film devotes a great deal of time to the subplot of Hercules and his good buddy-but-not-bedmate Hylas. This subplot plays an important role in the epic but it could have been omitted in the film, for the only impact Hercules has on the story is that he profanes the treasure-room of Hephaestus on the Isle of Bronze.  Obviously any of the Argonauts, excluding the more sensible Jason, could have performed the same action.  The fact that the filmmakers kept this unnecessary subplot suggests that they wanted to maintain some fidelity to the original epic, so that the film wouldn't just be a "catalogue of wonders."

Though the Argonauts' encounters with Talos on the Isle of Bronze and with Triton amid the Clashing Rocks may be the film's best known-- and most excerpted-- sequences, Jason's sojourn into Colchis has the greatest thematic relevance with the idea of the wasteland.  Almost as soon as Jason rescues a new ally from the sea-- Aeetes' daughter Medea-- he loses his false friend Acastus, who fights with the hero and then escapes into the sea.  Later Acastus betrays the Argonauts to Jason, informing Aeetes that they plan to steal the Fleece to restore their own land.  The heroes evade captivity thanks to the help of Medea, who has fallen in love with Jason.

Without question Aeetes rules a realm of magic: he has the Fleece guarded by the Hydra, and when the hero kills the many-headed creature, Aeetes appeals to the witch-goddess Hecate to transform the Hydra's teeth into skeletal soldiers.  He rails against the Argonauts for having come to steal the Fleece, and his argument h would be compelling if he were not a figurative King of the Dead. This makes him the sort of myth-personage who always gets plundered by great heroes, thus allowing those heroes to bring back supernatural gifts for (usually) the betterment of mankind. In addition, by defeating Aeetes' minions of death, he has in effect defeated the power which the mortal Pelias also represents, so that in a symbolic sense the film feels as though Jason has achieved his ends, even though Pelias has not yet been literally conquered.

Medea is the one weak element in JASON.  Of course she could not be forced to love Jason by Aphrodite as in the epic; for modern audiences she had to fall in love with him normally.  But their love does seem to occur by the authors' divine fiat anyway, and neither Nancy Kovack or Todd Armstrong are able to impart anything but marginal romantic feeling.  Medea is also stripped of all of her sorcerous powers, so that she's nothing more than an additional prize for the titular hero to steal from Colchis, after she agonizes very briefly about betraying her father and her people.

It's axiomatic that a pop-cultural film like JASON cannot possibly reproduce the full range of mythopoesis available in even a late-classical work like THE ARGONAUTICA.  Yet, even though JASON did not win great box-office success in its time, it does grapple with some of the same metaphysical issues presented by the ancient myths-- not least, the limits of man's indebtedness to his gods, and to the deeper sources of imagination from which the gods may be spawned.  In this respect, JASON succeeds far better than most of the quasi-religious spectacles of the same time-period.

Posted by Gene Phillips at 4:49 PM
Email ThisBlogThis!Share to TwitterShare to FacebookShare to Pinterest
Labels: combative adventures, the marvelous