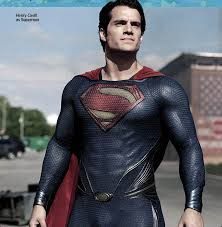 
Such is my disappointment in MEN OF STEEL that I don't want to spend much more time out of my life analyzing its faults and flaws.

Certainly it's not the worst film of its kind.  At the same time, there are many bad films that manage to be more entertaining than this Zach Synder flick.

None of the niggling controversies about the flick-- about the demolition of huge cities invoking 9-11, about Superman breaking a "code" that does not exist in this iteration-- mattered to me.  Indeed, one of the few intense moments of this film revolves around the transgression of said code.  There are moments where Henry Cavill's intense performance overcomes the banal sentimentality and slapdash character motivation of the script. The action-scenes are well constructed in their way, though my inability to become invested in the characters hampered what pleasure I could take in the FX-scenes.

Perhaps the most annoying thing in my view is the dull, dingy color scheme of the film.  Most scenes are dominated by yellows and browns, blacks and greys, and as others had commented, even the famous super-suit has been darkened.  It's a strange thing to behold, when even superhero films that invoke a *noir* mentality, such as the Nolan Batflicks and Snyder's own WATCHMEN, are more colorful than a Superman film.

Clearly Snyder was hoping to rebrand Superman with his own aesthetic, the better to promote his own celebrity.  Nothing wrong with that, but I find it to be an impoverished aesthetic.  It reminds me somewhat of the attempt the 1984 film GREYSTOKE made to do a Tarzan film without any of the Burroughs mythology.  That's not quite apt, of course, since Snyder does work in the usual Superman cast, as well as replaying the General Zod saga from SUPERMAN II with state-of-the-art FX.  And there's one moment that almost taps the mythos of the comic-book Superman, where it's revealed that Superman himself has become a literal "ark of Krypton," carrying in his own body the genetic history of Krypton's lost people.

As I write this, it's been said that the box office take for MAN OF STEEL has undergone a severe drop after its first two weeks.  The film will still probably make money overall, but if the rebranding proper fails, hopefully Snyder will go off and wreck some less classic superhero.

Posted by Gene Phillips at 4:59 PM
Email ThisBlogThis!Share to TwitterShare to FacebookShare to Pinterest
Labels: combative adventures, the marvelous