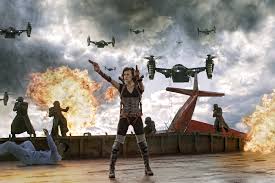 
I've never agreed with critics who put down the RESIDENT EVIL films for not having the horrific content of zombie films.  I can't speak to the films' adaptation of tropes from the video games, with which I have no familiarity.  But from the first RESIDENT EVIL, which introduces its iconic heroine Alice, it's always been clear to me that the zombies aren't the focus of the film, as in George Romero's DEAD films.  These are films of adventure, and the zombies are just cannon fodder for the heroine and her allies.

In general the EVIL films-- whether or not helmed by frequent director Paul W.S. Anderson-- have been good popcorn fare, with just a hint of the same mythic tropes developed in the ALIEN franchise; where a kickbutt female becomes the hope of the world due to her ability to assimilate the powers of the fiendish invaders.

That said, I have to say that RETRIBUTION-- the latest live-action film in the franchise, all of which have starred Milla Jovavich as the heroine Alice-- was the weakest one I've seen in terms of action and spectacle.  Part of the problem is that most of the action takes place within one big complex, depriving the story of the quasi-epic scope available in other entries.  Ironically, making ths film more like a video game deprives the film-franchise of one of its best features.

Alice and many familiar faces from the series-- Jill Valentine, Rain Ocampo, and Albert Wesker-- appear here, but the script, as marking time for the proposed "sixth and final installment," does little more than put them through some "Alice in Wonderland" mutations.  Alice's ally Jill turns against Alice, having fallen under the power of the human-hating computer program "the Red Queen." Alice finds that she herself has been cloned, and that one of her clones has produced a female child, one Becky, who happens to be deaf-and-dumb.  Wesker, usually a villain in most of the stories, enlists Alice and her friends to help him prevent the extinction of humanity by the killer zombies.  None of it is precisely bad, but none of it has the extra *oomph* that made other series-entries fairly appealing.  The most I can say is that RETRIBUTION includes a very good hand-to-hand battle between Jovavich's Alice and Sienna Guillory's Jill. 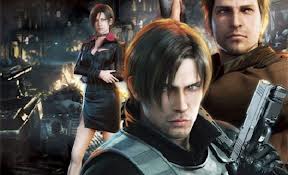 In contrast, the animated film DAMNATION-- the second film of its kind, and released in the U.S. slightly after RETRIBUTION-- manages to keep some of that old kickass feel. Again, since I don't follow the games, perhaps I enjoyed DAMNATION better simply because it was my introduction to two new characters, American soldier Leon S. Kennedy and devious spy-girl Ada Wong.  Wong actually shows up in RETRIBUTION as well, but her character in the live-action movie lacks the gusto of the animated version.  In addition, DAMNATION, in addition to the usual slobbering alien-predator mutant monsters, benefits from a strong villain, lady president Svetlana Belikova of the "Eastern Slav Republic."

I can't say that either film's plot stuck with me very long, but DAMNATION scored with me by creating some incidental characters-- albeit characters doomed to perish almost immediately-- a small band of Slav rebels attempting to fight Belikova but also attracted to American pop culture.  In contrast, RETRIBUTION was just the same old group of recurring characters, and so proved a little on the boring side.  Possibly Paul Anderson took it easy with this one while warming up for his supposed big finale.
Posted by Gene Phillips at 12:45 PM
Email ThisBlogThis!Share to TwitterShare to FacebookShare to Pinterest
Labels: combative adventures, the marvelous