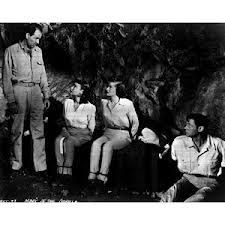 The third and fourth JUNGLE JIM films, both directed by William Berke, register pretty low even on the "dumb fun" scale.

The only metaphenomenal aspect of GORILLA is that some of the ex-Nazi villains of the piece dress up like gorillas in order to keep intruders away from a game preserve, where some wartime gold has been buried.  The evildoers are led by Onslow Stevens, usually a dependable "B" face but rather dull this time out.  The recrudescence of Nazi evil, which was a routine trope in postwar flicks, is also not exploited for any patriotic vibes.  The continuity, such as it is, is often broken up by gobs of stock footage, and though Jungle Jim gets to wrestle with three different beasts, none of the fights are interesting.  The only pleasant aspect is that, as with the first two films, the story includes two hot girls, and once again there's a "cute American" type as well as a "exotic foreigner" type.  Neither female character does very much beyond (as the pic above shows) getting tied up.  This might be a plus for a certain type of viewer. 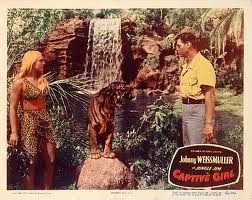 CAPTIVE GIRL breaks with that "tradition," for it only has one female in it, though as she's dressed in a leopardskin one-piece, she may make a more positive impression.  Played by swimming champion Anita Lhoest, who never made another film, she's not a "Sheena"-style fighter but she does have a pet tiger that comes to her aid.  In addition, since she was orphaned by one of the film's villains and has the usual jungle-upbringing, she seems to have a slight rapport with the animals, though the tiger is the only one who obeys her.  The title makes no sense because she spends most of her film-time running around free.

In place of two babes, CAPTIVE gives the viewer two villains of note.  One is Buster Crabbe, who played Tarzan in a 1933 serial, just one year after "Jungle Jim" star Johnny Weismuller made his fame by playing the ape man in the MGM film-series.  The two "ape men," who were both swimming stars in their youth, naturally have a climactic battle underwater, but it's a pretty desultory battle.  I got more entertainment out of seeing long-time B-film badguy John Dehner as "Hakim," the guy responsible for orphaning the jungle girl.  He's dressed up in witch-doctor garb and colored in "brownface"-- supposedly because he's some sort of Arab-- but the actor projects a nice aura of menace despite it all.  The villains are both after a sunken treasure connected to the old sacrificial rites of Hakim's tribe, and as usual Jungle Jim represents the role of the progressive colonist, trying to turn the heathens away from the old ways.  It isn't much, but it gives the story a little more heft than the threadbare GORILLA.

ADDENDUM: I should note an interesting conundrum about the phenomenality of MARK OF THE GORILLA. Since it is the intent of the Nazi crooks to convince outsiders to beware of real gorillas, for this film the "phantasmal figurations" trope is naturalistic, just as it was for 1943's LEOPARD MAN. However, unlike LEOPARD MAN, GORILLA actually treats the viewer to the sight of men dressed up as gorillas for what I deem an "outre" purpose-- as opposed, for instance, to wearing such attire to a costume party.
Posted by Gene Phillips at 2:42 PM
Email ThisBlogThis!Share to TwitterShare to FacebookShare to Pinterest
Labels: astounding animals (u), combative adventures, exotic lands and customs (u), outre outfits (u), phantasmal figurations (u), the uncanny