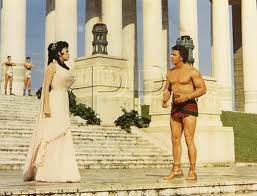 
THE LOVES OF HERCULES, one of the first imitations of the successful 1958 HERCULES, is often dismissed as just another Italian fantasy-peplum.  Most of these follow a very set pattern revolving around the problem of a Herculean hero's fidelity to a "good woman" upon being tempted by a "bad woman," usually one who is (a) an evil queen, (b) a somewhat older, more experienced female, (c) a sorceress, or (d) two or more of the above.

LOVES, though, isn't quite so predictable, nor is it automatically the sort of cheesefest one finds in most other examples of the subgenre.  True, to see the qualities of LOVES, one must get past cheap sets and effects, flat and unpoetic English dialogue, and the clumsy performances of leads Mickey Hargitay (as Hercules) and Jayne Mansfield (playing both good woman Deianeira and bad woman Hippolyta).  But there's more going on beneath the flexing of muscles and boobs than is usually the case.

For one thing, the story begins with a degree of tragedy.  While Hercules is away consulting with an oracle-- who tells him he's fated to suffer for having slain "the serpent of Hera"-- a plot-thread never heard from again-- his wife is slain by evil Licos, counselor of the city of Ecalia.  Licos then sets up his own ruler, the father of Deianeira, for the deed and then pre-emptively kills the old king.  His original plan seems to be that when Hercules comes seeking vengeance, he'll take out his fury on Deianeira, the inheritor of the throne, and leave the way clear for Licos' assumption of power.

Hercules does come to Ecalia, but on seeing the busty queen he immediately begins to forget his slain wife and incline toward Deianeira.  He refuses to make war upon a woman, but Deianeira's own people judge her for the crime of her father, perhaps hoping to defuse Hercules' anger.  She is put through the "trail of Themis," in which a warrior-- in this case, Hercules-- must hurl axes at the bound woman. Apparently the idea is that if she's innocent, the goddess Themis will spare her, though the film is spotty on this point.  It's also not clear as to whether Hercules deliberately misses her with each throw, or whether Themis really intevenes.

Hostilties cease between Hercules and Deianeira, and they become more friendly, but Licos has another plan.  He sends for Deianeita's fiancee-- to whom she was engaged by her father-- and sets up a quarrel between the fiancee and Hercules.  Later Licos has a stooge kill the fiancee and frame Hercules for the deed.  Then Hercules runs off to clear his name, following Licos' agent.  The agent blunders into the land of the Amazons, where he's killed by one of their guardians, a gigantic-but-not-very-mobile Hydra.  Hercules kills the monster but he's wounded.  The Amazons find the hero and take him back to their city.

Meanwhile, Deianeira learns of Licos' murder of her father and the framing of Hercules.  The villain keeps her alive for the usual reason, hoping to make her marry him and secure his rule.

Hercules fails to return to Ecalia for a very good reason: the Amazon queen Hippolyta-- who loves to seduce men and then torment them by changing them into agonized trees-- uses magic to transform herself into the image of Deianeira.  For some time the muscleman is mazed into thinking he's cohabiting with his true love-- always a good way to absolve the hero of some extracurricular hanky-panky.  Fortunately for the hero, one of the other Amazons exposes Hippolyta's plan.  The Amazon shows Hercules the tormented tree-people, which snaps him out of his enchantment.  He escapes, while Hippolyta, though she kills the traitor Amazon, is slain by one of the tree-people.  Hercules returns to Ecalia to raise hell.  Licos flees with Deianeira, but in the countryside they are attacked by an ape-creature.  The ape kills Licos, Hercules kills it, and the lovers are reunited.

Except for the bit about the ape-man at the end-- which seems to have been tossed in so that Hercules have one really good hand-to-hand battle-- this heroic fantasy is reasonably logical for its sexual politics. In a symbolic sense, Deianeira-- named for one of the archaic hero's lovers-- is a tacit substitute for the wife killed by Licos' schemes.  The wife's death frees Hercules to take on a new love, which is something of a sop to modern tastes, since the original usually just took new concubines whenever he pleased.  The "trial of Themis," though not a real Greek ritual, carries some of the resonance of real atonement-rituals, which were concerned with expelling evil from the community by placing supposed evildoers through ordeals.  It's possible to read the rather William Tell-ish ritual as a distanced sexual ritual, as well.  Also in agreement with the ancient Greeks is the film's treatment of the Amazons, since they transgress the normality of "good" women like Deianeira, taking pleasure in being sexually active and in performing sadistic tortures.  The idea of humans being tormented in tree-form was probably borrowed from Dante's INFERNO.

To be sure, it's a mixed bag.  But in comparison to most of the films of the period, whether starring Hercules, Samson, or Ulysses, at least there's a little logic to all the loving and the killing,

Posted by Gene Phillips at 5:37 PM
Email ThisBlogThis!Share to TwitterShare to FacebookShare to Pinterest
Labels: combative adventures, the marvelous