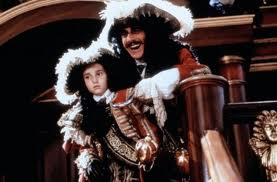 In re-viewing Steven Spielberg's HOOK, I found myself thinking that it should have been subtitled, "REVENGE OF THE ADULTS."

As I noted in my essay on J.M. Barrie's original novel, I regard Barrie's story of Peter Pan-- whether in book or play format-- to be a "combative comedy."  It is "combative" because the plot centers around the direct conflict of two dynamic adversaries.  It's also a "comedy," though I found it to be one that revolves less around "jokes" than around what I called a "homey type of comedy." The book's main theme is stated by the gentle irony found in its concluding lines: "and thus it will go on, so long as children are gay and innocent and heartless."  Over and over Barrie repeats his refrain: the Darling children rarely if ever remember the heartbroken parents they have left behind, Tinkerbelle doesn't even think of expressing appreciation for those who clap for the fairies and bring her back to life, and so on.  But Barrie is making a subtle point: for him the essence of childhood is not the sort of idealized winsomeness of Victorian days, but a divine selfishness, a desire to play ceaselessly without consequence-- except perhaps with girls, whose mothering instincts kick in early.

Prior to my first viewing of HOOK I thought it seemed perfectly natural that Steven Spielberg should do a Peter Pan movie, given that he was often associated with movies that possessed juvenile content.  However, most of those films were works on which Spielberg served as a producer and not director, like 1985's GOONIES (though Spielberg did contribute the story there).  As a director his content "skewed adult"-- and that may have a lot to do with his willingness to do a story about Peter Pan choosing to grow up, an idea with which Barrie himself toyed.

The vision of youth presented by Spielberg and his writers in HOOK demonstrates no interest in Barrie's theme of childish insensitivity; instead, it is the mature Peter Pan, now "Peter Banning" (Robin Williams) who has become insensitive to the needs of his children Jack and Maggie, sired with his wife Moira, the granddaughter of the original Wendy.  In order to age normally, Peter has forgotten his earlier existence in Neverland, and subdues all of his life-instincts as a husband and father by transforming into a workaholic corporate raider.  In the film's best line, the aged Wendy observes, "Peter-- you've become a pirate!"

Somehow Captain Hook (Dustin Hoffman), though his ship is stranded in Neverland, learns where Peter Banning lives and steals his children in order to lure Peter Pan back for a climactic battle.  This development may be read as an inversion of Barrie's theme.  At no time do Banning's children yearn after the absolute freedom of agelessness and endless playtime; no sooner are they in Neverland that they want to return home.  Children aren't the ones who need Neverland; it's adults who need it as an anodyne against the pressures of being an adult.

Peter Banning, having no memory of Hook or Neverland, has no idea how to cope with the kidnapping.  Spielberg's solution is to turn Tinkerbelle into Jiminy Cricket, who facillitates Peter's return to Neverland.  Peter still remembers nothing even in Neverland, so his nemesis allows him time to "re-train" himself, so that Hook will be able to kill him in "good form."

Tinkerbelle leads Peter to the current edition of "the Lost Boys" for his training.  These Lost Boys aren't "innocent and heartless," they're simply boisterous, much like the earlier "Goonies."  In addition to trying to cast off his middle-aged attitudes and his middle-age gut, Peter has to face Rufio, a rival for the  leadership of the Lost Boys.  Meanwhile back at Hook's pirate ship, the piratical villain devises a means to further torment his old foe, as he tries to brainwash Jack into becoming a "mini-Hook."  This is perhaps the only place where the film invokes Barrie's idea of an inherent juvenile selfishness, in that Hook puts pressure on the kids by claiming that their parents don't love them, but only give in to their needs to "shut them up."  Of course neither Jack nor Maggie is unusually selfish, so the failure of Hook's scheme is something of a foregone conclusion.

Though there are a number of charming moments in the film-- I particularly like Maggie's horrified reaction when the pirates gives her an "F" for failing his phony-baloney class-- HOOK suffers from too many incidental characters and a wayward, rambling plot.  The ending is the greatest failing: after building up to the combat of Hook and the rejuvenated Peter Pan, the script has the hero try to walk away from the conflict twice-- even after Hook kills Rufio-- apparently out of some misguided sense of moral rectitude.  There is a clever bit in which Hook is "killed" by his old nemesis the crocodile for roughly the same reasons he is in the Barrie book: so that the hero himself need not commit the final act.  The humor is definitely more oriented toward "boffo jokes" than toward Barrie's form of gentle humor, and because the production seems so ceaselessly high-energy, the audience in 1991 was probably ready for the film to end long before it did.

Dustin Hoffman's Hook rates as the best featured performance here; he's still somewhat foolish, as in the book, but not as incompetent as he is in Disney's PETER PAN. Robin Williams is a mixed bag: he does quite well as "serious, adult Peter," but his humorous moments just sound like outtakes from a Williams standup routine and he's a washout as the rejuvenated, flying-with-his-pot-belly-hanging-out Pan.  Even allowing for the massive change in Tinkerbelle's character, Julia Roberts proves a terrible choice, lacking any sort of fairy-like luster.  Bob Hoskins and Maggie Smith acquit themselves best in their supporting roles.


Posted by Gene Phillips at 3:43 PM
Email ThisBlogThis!Share to TwitterShare to FacebookShare to Pinterest
Labels: combative comedies, the marvelous