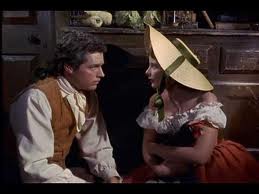 It's been such a long time since I originally saw THREE WORLDS OF GULLIVER that I didn't remember that its script took a WIZARD OF OZ route at the end, invoking the hoary "it was just a dream" motif.  The conclusion does allow for the possibility that Gulliver's encounters with giants and pygmies may have really happened, as was the case in the original Jonathan Swift novel.  But the script is so weighted toward an allegorical interpretation that the dream seems the better explanation of events-- hence, GULLIVER best fits the "delirious dreams and fallacious figments" trope.

GULLIVER was the first collaboration between producer Charles H. Schneer and FX-wizard Ray Harryhausen to follow on the heels of their successful 1958 SEVENTH VOYAGE OF SINBAD.  GULLIVER was also the first of four collaborations that adapted classic literary works, followed by Jules Verne's MYSTERIOUS ISLAND, the ARGONAUTICA of Apollonius, and H.G. Wells' FIRST MEN IN THE MOON.  In this review I suggested that JASON AND THE ARGONAUTS might have been conceived as an attempt to make a "prestige" production.  GULLIVER shows some similar inclinations, though the film substantially rewrites the satirical intent of Jonathan Swift in order to render a more crowd-pleasing story about a young couple-- Gulliver and his fiancee Elizabeth-- and their attempt to master their contrary views on their life together.

Beginning in the English city of Wapping in 1699, the story begins with Elizabeth reacting badly as she hears rumors that her fiancee, Doctor Lemuel Gulliver, may venture out on a ship in order to gain greater riches. The two come together at Gulliver's impoverished medical office, where he's forced to accept poultry in payment from Wapping's rural residents. Gulliver makes his argument, that only by making more money can they hope to have a real life together.  Elizabeth counters that she doesn't want him going away from her, that above all else she wants them to live together in Wapping, no matter how poor they are.  Eventually Gulliver makes the decision to ship out no matter what Elizabeth wishes.

However, in a very significant departure from the novel, Elizabeth stows away on the ship, determined that she won't be parted from Gulliver.  Moments later, a storm comes up, and Gulliver is hurled into the sea. By the logic of the dream-explanation, Elizabeth is also tossed into the sea, though at no time does the viewer see this occur.  Gulliver floats to Lilliput and encounters the miniscule Lilliputians, the first of the title's "three worlds."  In a very softened version of the Swift satire, the giant Gulliver finds that the small-mindedness of the Lilliputians proves more formidable than any of their weapons. One satiric barb-- wherein the king claims, "I hate justice but love law"-- is the wittiest non-Swiftian line in the film, though it, like the script's other attempts at satire, is a little on the glib side.  The least interesting aspect of the script is its attempt to inject a Lilliputian romance between two young lovers who directly recapitulate the Gulliver-Elizabeth quarrel.  The most interesting moment is a rewrite of a Swift scene in which the giant publicly micturates on a fire to put it out and is condemned for it.  In a more G-rated vein, the film's Gulliver puts out a fire by spitting water on it-- though significantly, he also spits on the Lilliputian queen moments after she has mooned over his titanic stature, causing her to turn against him and join the king in condemning Gulliver. A doctrinaire Freudian would probably read this "spewing" as a deferred sex-act, and this carries some weight simply because the sex-act is alluded to more overtly than one usually sees in fantasy-films of the period.  At any rate, Gulliver escapes Lilliput's wrath in a boat.  As he does, he claims that his experience with being a "powerful man" has soured him on the position he argued in England. Now he wants to live a life as a "nothing," whom no one will notice.

Providentially, this change in attitude brings him to the second world, that of Brobdingnag, where people like Gulliver are as tiny dolls before the gigantic inhabitants.  Now that he's agreed with Elizabeth, he immediately comes back into contact with her, learning that she too was hurled off the ship, and has arrived in Brobdingnag before him, where she's already been made a pet of the king.  Gulliver and Elizabeth are then taken care of by their new masters, which would seem to be Elizabeth's bucolic dream come true, just as Gulliver's gigantism signifed his desire for greater importance.  But although the giants are less overtly nasty than the Lilliputians, they have their own demons of pettiness, and soon Gulliver begins to worry that their charity will come to an end.  An evil alchemist accuses Gulliver and Elizabeth of being witches, and though Gulliver initially outwits him, he finally finds himself in a gladiatorial arena, fighting a "colossal" lizard through the FX-expertise of Harryhausen.

This time, Gulliver and Elizabeth both escape to the sea, but when they next awake, they find themselves washed ashore near Wapping once more-- the "third world" of the title.  They're uncertain as to whether they mutually dreamed the giants and the pygmies, and Gulliver suggests that both of these figures are demons within their own hearts.  The only thing of which they are certain is that their love together, the compromise of their respective viewpoints, will enable them to bring forth new life that will transcend the pettiness of kings and princes.

I've omitted one element in this summary: whereas Gulliver becomes a giant in Lilliput, symbolizing his need for prestige, in Brobdingnag both he and his fiancee are turned into dolls by a giant little girl, the native girl Glumdalclitch.  She's a "mothering giant" who has not yet reached puberty, and who professes not to understand the sexual impulses of her "dolls," the intensity of which leads the couple to get married-- very quickly!-- by a Brobdingnagian priest. Yet, where Gulliver's only mirror-image in the Lilliputian segment is another young man who desires importance, in the Brobdingnag segment Glumdalclitch is given a peculiar "dark clone," the alchemist's same-aged daughter Shryke, who incarnates an "anti-mothering" sadism and yearns to see the little people burned at the stake.

When all is said and done, though, the few glimmers of imagination in the screenplay-- the deferred sexuality, the doubling motifs-- are overpowered by the ponderous allegory.  GULLIVER's reading of Swift is heavy-handed in its attempts at satire, particularly when Gulliver's peerless, almost Christ-like generosity is rejected by the uncomprehending Lilliputians. In comparison to most of the Schneer-Harryhausen collaborations, GULLIVER is the least fun, and feels the most like a secondary-school student trying to rationalize the thematic appeal of the Swift story.  Worse, the synthesis that GULLIVER proposes to solve the rift between male and female-- that love will find a way-- feels like a cop-out.

Posted by Gene Phillips at 12:09 PM
Email ThisBlogThis!Share to TwitterShare to FacebookShare to Pinterest
Labels: delirious dreams and fallacious figments (u), the uncanny