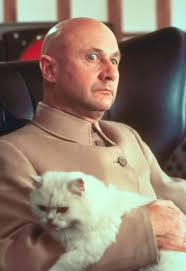 In contrast to LIVE AND LET DIE, where an excellent Fleming book gave rise to a so-so movie, Fleming's YOU ONLY LIVE TWICE-- the last Bond book published prior to the author's demise-- is a so-so book that gave rise to a movie that is, if not one of the best Bonds, one of the most iconic.  Though I've commented elsewhere that I liked Charles Gray's take on the uber-villain Blofeld better than the performances of Donald Pleasance or his successor Telly Savalas, there's no doubt that the Pleasance image is the one best remembered, and the most frequently parodied.

The book ought to be a lot better than it is, given that it follows one of the great tragedies in James Bond's fictional existence: the slaying of his new wife Tracy by Blofeld and his equally evil wife Irma Bunt.  Instead, Fleming follows the same pattern that he did following Bond's tragedy in CASINO ROYALE: 007's boss gives the agent a minor-seeming errand to help the agent get over his remorse, but the errand mushrooms into an encounter with a major adversary.  Much of the continuity of Fleming's TWICE feels like a travelogue in which the author acquaints the reading-audience with the many mysteries of Japan.  In order to obtain necessary intel from the Japanese, Bond is engaged to kill an eccentric recluse-- the almost comically named "Doctor Shatterhand."  The doctor becomes an embarassment to the Japanese government because he maintains a "garden of death" worthy of Hawthorne's Doctor Rappacini, and many Japanese citizens, full of their culture's high regard for suicide, seek out the garden in order to immolate themselves.  When Bond investigates, he learns that Shatterhand is actually Blofeld in disguise.  Blofeld has essentially "turned Japanese"-- he even sports a samurai armor and fights Bond with a sword-- but Bond manages to kill the SPECTRE leader and his wife before destroying the villain's redoubt.  In a side-plot, Bond loses his memory and almost "turns Japanese" as well when his female ally Kissy Suzuki tries to convince him to live with her.  The novel has no marvelous devices but falls under the uncanny category of "bizarre crimes," due to Blofeld's almost supervillain-like passion for experimenting with the lives of the Japanese.  In contrast to the movie, Fleming does attempt in his *gaijin* way to grapple with Japanese culture's fascination with suicide and death, which gives it a better than average sociological mythicity.

The cinematic TWICE, directed by Lewis Gilbert-- his first of three Bond films, followed by THE SPY WHO LOVED ME    and MOONRAKER-- doesn't delve that deeply into Japanese culture.  However, like the novel the film is one of the first Western stories to spotlight the subculture of ninjas, who would become major players in the adventure-films of the 1970s and all succeeding decades. Since this film followed on the heels of 1965's THUNDERBALL, and the series would not adapt ON YOUR MAJESTY'S SECRET SERVICE until 1969, Bond has no personal animus against Blofeld, except for Blofeld's having been the prime mover behind the THUNDERBALL affair.  Therefore TWICE is the first time the characters meet on-film. Blofeld's Japanese HQ does keep one element from the novel, in that the villain stocks a pool full of vicious pirahna.  But this Blofeld's raison d'etre is distinctly of the Space Age-- as is Bond's, since here we see the agent using such super-scientific devices as cigarettes that can cast forth explosive charges.

TWICE is probably the film most people will remember using the trope of "independent villain tries to foment war between the superpowers."  I seem to remember that Marvel Comics had used the trope at least twice before TWICE came out.  Still, the opening scene of the film-- in which a spacecraft sent by Blofeld "devours" an American space capsule, causing the death of a life-lined astronaut-- is one of the mythopoeic high points of the entire Bond series.  That bravura scene best "encapsulates" (sorry) the Cold War tensions underlying the "race for space."

Though scripter Roald Dahl dispenses with most of Fleming's travelogue-like sequences-- particularly scenes of Bond drinking and whoring with his Japanese colleague Tiger Tanaka-- Dahl still keeps to Fleming's image of Japan as a male fantasy come true, full of pliable, obedient women.  The only exception to this rule in the book is the aforementioned Kissy Suzuki, an expert pearl diver enlisted to help Bond gain entrance to Shatterhand's palace.  The film, in contrast, has three moderately compelling women-- Blofeld-agent Helga, who almost kills Bond in a gimmicked-up plane, and two female Japanese agents.  One dies a sacrificial death, while the other-- a much altered version of "Kissy"-- joins Bond's side in the big climactic battle, though she doesn't do a helluva lot.  So on the frontier of "gender politics" TWICE is a slight step back from THUNDERBALL.

A Wikipedia comment asserts that Dahl modeled his script after DOCTOR NO, but in my opinion the structure is closer to THUNDERBALL.  Both films are minimally plotted, as Bond seeks to investigate some Machivellian enemy and has to keep fending off continual attacks even as he manages to "tour" an assortment of exotic locales.  But if the plot is ragged, the exotica is always stimulating, and Bond has two better-than-average fight-scenes amid his peregrinations.  Gilbert's final Bond film MOONRAKER follows the same pattern but gives the audience far less bang for the buck.

Posted by Gene Phillips at 3:06 PM
Email ThisBlogThis!Share to TwitterShare to FacebookShare to Pinterest
Labels: combative adventures, the marvelous