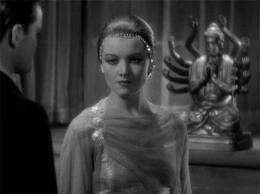 
THIRTEEN WOMEN has been hailed in some quarters as one of the first "psycho-thriller" films, though it really uses only one major trope of such films: the killer who goes after a list of victims and eliminates them in a variety of ways.  I imagine that the trope was nothing new even in 1932, but that it simply had not taken forms so intensely ritualized as to take on the names of subgenres.

As in the later psycho-thrillers, it's the monster who is the star, not her victims.  Said monster is the half-breed Ursula Georgi, whose early history is vague.  Her dominant motifs (as with the multi-armed idol in the still above) and her physical coloration suggest that she is half-Hindu, and her own aspirations to be considered "white," expressed in her end speech, indicate that her other half is Caucasian, though no specifics are given.

By 1932 Hollywood had done many "exotics" of one kind or another.  On occasion, a few of the more forward-thinking films allowed that exotics might commit nefarious acts because they had been sinned against by specific white people or by colonial culture in general, as we see in 1929's MYSTERIOUS DOCTOR FU MANCHU.  I am not likely to read the original book on which the film was based, as this essay doesn't make it sound like a must-read, but what little is printed makes me suspect that the author's original motive was more sensationalistic than sensitive.

Still, Ursula, as essayed with seething intensity by Myrna Loy in her "exotic" phase, does get across a fair amount of pathos for her "monstrous" character.  The victims, including Laura, the potential victim played by headliner Irene Dunne, are colorless society women, who begin to die like flies as an occult adviser, "Swami Yogidachi," sends them predictions of their dire fates.  The Swami, however, is merely a pawn of Ursula, who has a grudge against the women from their finishing school days.  According to Ursula-- and none of the characters gives any counter-story-- she was excluded from the school's society by "the color line," and this made it impossible for her to gain success in white society.  Now, since Ursula is indeed dark-complected, it's doubtful that she would have enjoyed much social success in white society even if her finishing-school sisters had opened their hearts to her.  Still, even if the society women are merely surrogates for white society as a whole, the script doesn't stoop to having them defend their people's prejudices.

The script also includes a few lines in which Ursula castigates white society for condemning half-castes to social ignominy: men can only be "coolies," while women-- well, Ursula won't say what their fate is, but she strongly implies that she had to pay for her finishing school fees by working on her back.  Possibly this trauma could explain why Ursula wastes time on these society snobs-- for at some point she cultivates a talent with a lot of potential for making heaps of money: hypnotism.  Some of the victims die merely as a result of a suggestion, as with a trapeze-artist who perishes after receiving one of the dire notes.  However, Ursula can compel men and women to act against their will, as when she forces the Swami to walk into an oncoming train.  After she kills most of the other twelve women-- though most of these deaths are not seen on screen-- Ursula fixates on killing, not Laura, but Laura's little boy.  To do this she resorts to both poisons and explosives, which actions get the police on her trail.  Does Urusla hate Laura's child because she's somehow unable or unwilling to conceive her own offspring?  The film doesn't go that deep, though the potential seems evident.

There's a brief suggestion at the end that perhaps the Swami's spirit returns at the end to doom Ursula as she doomed him. But since the Swami is only seen from Ursula's POV, it's more likely that she merely hallucinates him moments before she dies-- thus putting her in the position of being just one more overly suggestible female.

Posted by Gene Phillips at 3:05 PM
Email ThisBlogThis!Share to TwitterShare to FacebookShare to Pinterest
Labels: enthralling hypnotism and illusionism (u), perilous psychos (u), the uncanny