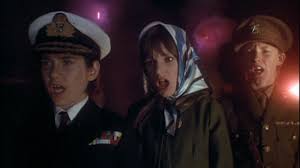 I wanted to like NOTHING BUT THE NIGHT, the sole production of Christopher Lee's company Charlemagne Productions.  However, in addition to having been a financial failure despite the top billing of both Lee and his frequent partner-in-horror Peter Cushing, NIGHT is also a failure in terms of aesthetics.

I can't make any comparisons between the film and the original John Blackburn novel. I theorize, though, that the novel may have managed to make the story's "slow build" revelation work.  But what might have worked on the printed page definitely does not work on the movie-screen.  Perhaps in selecting this novel for adaptation, Christopher Lee was attempting to distance himself from the more visceral Hammer fare for which he'd become internationally famous.  NIGHT's science-fiction elements, which relate to adults finding a way to biologically "download" their memories into the children at an orphanage, are revealed with a gradualness that is surely meant to be tantalizing but ends up as tedious.

The film begins promisingly with a scene on a bus transporting some of the orphans; a scene that foregrounds the film's conflict of youth and age, with older citizens on the bus looking cross about the orphans singing the Brit version of "99 bottles of beer on the wall."  The bus crashes, and though only the driver is killed, the orphans come under the care of pathologist Mark Ashley (Peter Cushing) and his younger assisant, psychologist Dr. Haynes.  Haynes discovers that one orphan, name of Mary, has strange dreams about having experienced a fire, and he wants to examine her in greater depth, even though the orphanage, the ominously named Inver Hall, wants all the children returned.  Haynes also finds out that Mary isn't entirely an orphan; that Mary's natural mother Anna Harb (Diana Dors) lost custody of her child because Anna was a prostitute who killed a man-- presumably a john-- and went away to prison for many years.  Anna shows up at the clinic, also wanting access to her stressed-out daughter.

Dr. Ashley's troubles are just beginning.  Not only does he have to contend with do-gooder Haynes trying to convince him that Mary needs special treatment, retired cop Colonel Bingham (Christopher Lee) wants to investigate the trusteeship that runs the orphanage.  Three trustees have perished as a result of unmotivated suicides in recent months, and one of them was a dear friend of Bingham's.  The Colonel also begins nosing about the case of the orphans, and Ashley reluctantly allows himself to be drawn into the investigation.  In addition, a scandal-rag reporter interviews Anna Harb, who's making a stink about not being able to see her daughter, and this reporter also joins Haynes' investigation.

Haynes facillitates a meeting between Anna and her daughter, but things go wrong, and Haynes is murdered by Anna.  The murder takes place offscreen, so the audience never knows what transpired, though the presumption is that Anna tried to steal her reluctant daughter from the clinic and Haynes gor in the way.  Anna Harb goes on the run, and presumably heads for the island of Bala, where Inver Hall dwells, anticipating that Mary will be sent there.  Ahsley continues his investigations of Mary's strange memories while Bingham seeks to find out if there's some sort of conspiracy that may have brought about the three suicides.

The various plotlines never entirely cohere, leading me to the suspicion that the book accounted for a lot of loose ends that this 90-minute movie had to leave out.  Suffice to say that though Ashley becomes less prominent in the latter half of the film, he and Bingham eventually uncover the truth: that the orphanage has become suborned by a private experiment which makes it possible for members of the "older generation" to live second lives, by taking over the bodies of school-age children.  After almost eighty minutes of "slow build," Bingham is finally witness to the true nature of these corrupted vessels.  He rages against the stealing of the lives of the young by the old-- the first time the film's moral theme becomes fully evident-- and a last-minute rescue prevents Bingham from being sacrificed in a fiery Guy Fawkes Day ceremony.

The reference to Guy Fawkes-- an English custom that may not play well outside the British Isles-- demonstrates that some aspects of the film are quintessentially British.  Other themes-- those of class warfare and the recrudescence of pagan religiosity-- may travel somewhat better, though almost a full year later THE WICKER MAN would delve into the same themes with far greater acuity.

For instance, take the character of Anna Harb.  Her function in the story is that of a "red herring;" she largely exists to take the viewer's mind off the strange doings at Inver Hall.  She doesn't suceed at this since she is, by definition, a low-class "working-woman," so the audience can't believe her to be involved in the high-level conspiracies.  She almost functions as a contrast in sociological terms, for throughout the film it's clear that British society abides by the Golden Rule, as in, "He who has the gold makes the rules."  This extends to the well-heeled trustees' ability to legally separate a mother from her daughter.  However, though the script suggests some sympathy for the concept of maternal rights, it extends no feeling for Anna Harb, who is little more than a cartoon of a lower-class woman.  It's not even very clear as to why she wants her daughter back so desperately, though a few lines suggest that somehow she may have been involved with the memory-transfer experiment.  It's possible to imagine a scenario that hurled a plague on high-class and low-class houses alike, but NIGHT is not sophisticated enough to pull that off, and the lack of moral resolution leaves a muddled result.  Moreover, Diana Dors doesn't provide any tension as a menacing psycho-killer.  In American terms, it's like watching Ann Sothern play a psycho-mom.

I certainly can't believe director Peter Sasdy to be at fault here, given that roughly two years previous he produced the brilliant HANDS OF THE RIPPER.  Only in the final Guy Fawkes scene does some of Sasdy's directing-talent show itself.  Lee and Cushing as always project good presence, but both of their characters are vague stereotypes.  Lee isn't all that impressive as an investigator, but he has a good scene in which he butts heads with the liberal scandal-rag reporter, which could also be construed as a matter of class politics.

Posted by Gene Phillips at 3:14 PM
Email ThisBlogThis!Share to TwitterShare to FacebookShare to Pinterest
Labels: the marvelous