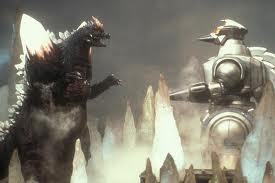 
I recall a review that raked GODZILLA VS. SPACE GODZILLA over the coals as one of the worst, if not the worst, of the "Big G" films.  It's not that bad, but it's not much more than one big setup for the clash between Godzilla, his evil "space clone" (complete with weird crystals growing out of his back), and a human-piloted mecha called "Moguera."

The very basic plot, picking up where 1993's GODZILLA VS. MECHAGODZILLA II left off, begins with those helpful Mothra-fairies providing a modern-day oracle, though Mothra herself has nothing to do with the story.  The fairies seek out the protagonists-- mostly a group of Godzilla-fighting soliders and lady psychic Miki Saegusa, a character who appeared in all of the Godzilla films from 1989 to 1995.  The fairies warn that a new monster is descending to Earth from space. Soon the authorities dope out that this new threat is "Space Godzilla," a clone of Godzilla's cells. In no less than two previous films, Godzilla's bodily cells had been thrust into space by his clashes with big monsters, and some of those cells mutated and grew in space.  Now, thanks to a "white hole," Space Godzilla is on the way back to Earth.

While waiting for the new threat to arrive, Miki and her soldier-allies attempt to rein in the old one.  One soldier, Yuki, has a grudge against the Big G and attempts to kill him with a special "blood coagulate" buller, but he fails.  Miki succeeds to some extent by using a psychic implant to attempt taking control of Godzilla mentally, but this plotline sputters out as well.  Thus when the two Godzillas come to blows-- inevitably trashing Tokyo for good measure-- humanity's only participant in the battle is the military-operated Moguera.  Moguera is visually based a giant robot that appeared in the 1957 Toho production THE MYSTERIANS, but the English script makes no direct connection between that film and this one.

It's just as well that the plotlines involving Yuki the vengeful solider and Miki the "Godzilla-hugger" peter out, for the humans are pretty much lost in the clash of the great powers.  The battles are good but only rarely above average.  Purely on the basis of nostalgia, Moguera is one of the film's better elements-- though he's also used for the best humor-line, when a soldier forced to dig a pit wonders if Moguera-- who has a drill-nose and was named for the word "mole" in Japanese-- might lend some aid. 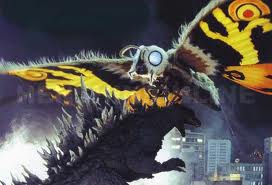 GODZILLA TOKYO S.O.S, appearing about ten years later and part of a new continuity, displays a much stronger script, one strongly indebted to the theme of the original MOTHRA of 1961.  For one thing, a character from the '61 film, Dr. Shinichi, is once more reprised by the original actor.  Shinichi and his family are honored by a visit from the Mothra-fairies, or rather from their descendants.  The fairies warn that dire things will happen because human beings have tampered with "the bones of the dead." This references the previous film in the series, where the Japanese government, as always seeking new ways to defend against the current Godzilla's rampages, constructs a robot using the bones of the very first Godzilla, killed in the classic 1954 film.  This robot is the new "Mechagodzilla," called "Kiryu" in the Japanese verison; I'll use that name here to distinguish this skeleton-based construct from other Mechagodzillas.

Just as MOTHRA critiqued the greed of capitalistic culture, TOKYO S.O.S. concerns itself with humanity overreaching its proper bounds by trifling with the remains of even a monster.  One might call this flick "ANTIGONE with giant monsters." One character even says portentously, "we crossed the line between mortals and gods."

The fairies add that Mothra will protect Japan from Godzilla if the humans will destroy Kiryu and return the bones of Original Godzilla to the sea.  But Shinichi's nephew Chujo is less than happy to hear the predictions, for he's a mechanic working on making Kiryu battle-ready.  Clearly Chujo has invested much of his own ego into the big robot.  He does have a meager interest in female soldier Azusa, one of the pilots of Kiryu.  However, a hotshot male pilot named Akiba is also interested in Azsusa, and the two men butt heads slightly.  However, the main focus of Chujo's narrative is that he wants to get the chance to see Kiryu in action-- and of course he succeeds.  There's even a sequence in he overcomes the limitations of his lower sociological status-- that of being a mere mechanic rather than a pilot-- to repair Kiryu at a crucial moment.

Mothra does intervent to fight for Japan even though the humans don't even come close to junking Kiryu until the very end of the story.  Mothra is killed, but just as in the '61 film and its 1964 sequel MOTHRA VS. GODZILLA, the sacred moth's new incarnations are waiting in an egg back on its native island; an egg which then breaks and spawns not one two larva-form "Mothrae."  Then it's a big four-way battle between Godzilla, his imitator Kiryu, and the two larvae.  It ends a bit more poetically than usual when Chujo drives Kiryu into the sea, thus belatedly honoring the fairies' wish.  In approved samurai fashion he's ready to die for his duty, but Azusa and Akiba rescue him.  TOKYO S.O.S., despite the generic sound of its title, is one of the few modern *kaiju* that successfully emulates the themes of the best giant-monster films of Japan's classic era.


Posted by Gene Phillips at 2:56 PM
Email ThisBlogThis!Share to TwitterShare to FacebookShare to Pinterest
Labels: combative dramas, the marvelous