Before getting to reviews proper, I'll mention in advance that only KING KONG ESCAPES is a "combative drama," given that only that film features two megadynamic forces fighting it out.

I enjoyed KING KONG ESCAPES in its initial release back in the day.  I don't think that even at that young age I was blind to the film's greatest deficiency: not that it didn't endeavor to follow the 1933 KING KONG's spectacular stop-animation FX, but that its choice of the "suitmation" for its version of Kong is ratty and overly comic-looking.

But though the film also lacks the deeper symbolic resonances of the Willis O'Brien epic, its script does make a game try-- more than one saw in 1962's KING KONG VS. GODZILLA-- to reproduce some of the most famous tropes of the 1933 film.  First of these is the trope in which Kong proves his "alpha male" status by continually besting other giant monsters-- here, a T-Rex, a giant serpent, and the formidable "Mechani-Kong."  The other is Kong conceiving a major crush on a pint-sized blonde beauty.  Director Ishiro Honda even throws in a redux version of the original's climb to the top of the Empire State Building, with the Tokyo Tower taking the place of the New York City icon.  Here it's Mechani-Kong, not the Great Good Ape, who takes the dramatic fall in the end.

There's no question that ESCAPES is more in a juvenile mode than the original film; the former is even loosely based on a 1966 Saturday-morning KING KONG cartoon by Rankin & Bass.  But Honda does a great job of respecting the juvenile audience of his day.  Even some of Honda's other *kaiju* films could bog down in earnest discssions of the Menace At Hand.  But the script keeps the pulpy conflict boiling on all levels.  Conflict between Doctor Hu, the supergenius villain who creates Mechani-Kong, and his maybe-Communist Asian backers, represented by the sultry "Miss X."  Conflict between Kong and the crew of a United Nations submarine, when Kong spies the cute blonde nurse Susan. Conflict between Hu and Kong, when the scientist realizes that his robot ape can't mine the precious element he needs, forcing him to enslave the real simian into his service.  Conflict between the sub's commander and Hu, "who" have met before in other adventures.  This sounds like a simple feat, but given the staggering number of dull juvenile features, Honda and his scripters deserve kudos for keeping things lively.

But the most impressive element of ESCAPES is the soaring, majestic score of Akira Ikufube.  When that music comes up, the rattiness of the Kong costume falls away, and the superior Robot-Kong costume looks like it cost a million bucks. 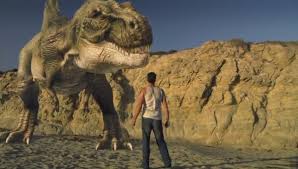 I've already reviewed the 1975 LAND THAT TIME FORGOT, which is an enjoyable adaptation of the 1918 Edgar Rice Burroughs novel.  That film kept to the idea that the dinosaur-haunted "land" was an isolated part of Earth, but today that idea won't fly: the globe has been too well charted.  Thus the 2009 LAND sends its hapless protagonists-- a group of vacationers cruising the Caribbean-- through a time vortex, so that they land on Caprona, where various other travelers have preceded them.  Since it's a cheapjack movie, there's only one dinosaur and a handful of human victims.  The only strong similarity to the Burroughs novel is that some of those travelers are WWII Germans who still have a working U-boat.  The vacationers must ally themselves to the Germans in order to search the isle for petroleum.  Bad luck; they can only get the oil they need if they get rid of the T-Rex.

There's enough incident to keep this item rolling along, but the dialogue is horribly banal and the actors are just paying the rent. 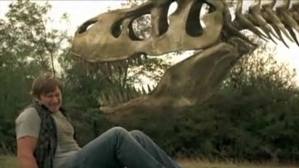 However, as poor as the 2009 LAND is, it's a masterpiece next to 2010's TRIASSIC ATTACK.  Given that the "raison d'etre" of most SYFY films is to write a sketchy story around some giant, equally sketchy CGI critter, I wonder if TRIASSIC came about when some animator said: "If SYFY will pay for dinosaurs with all their flesh animated, why wouldn't they pay for dinos with no flesh?"

For that's the goofy idea TRIASSIC puts out there.  An Indian sorcerer becomes irate with the white-eyes ravaging the environment-- like many SYFY flicks, this one resorts to "eco-terrorists" to make the story sound a little bit relevant.  He uses his magic to animate three dinosaur SKELETONS from a nearby museum, and they go on a rampage until one of the dull-stick protagonists figures out how to make them go away with the technological wizardry of an elecrtical attack.

The only amusing image to arise from this folderol is that one of the dinos happens to be a pterosaur.  How exactly does the SKELETON of a pterosaur manage to FLY?  Oh, yes, magic, quite right.  Forget I even asked.

Posted by Gene Phillips at 3:31 PM
Email ThisBlogThis!Share to TwitterShare to FacebookShare to Pinterest
Labels: combative dramas, the marvelous