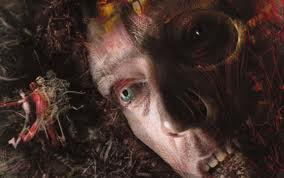 Though this "acid western" includes two major scenes in which characters experience wild psychedelic "trips," and the villain lusts after some unspecified magical power, there's never a strong declaration that magic has a real effect in this world.  Therefore I class this as an "uncanny" film, and the psychic journeys, masterfully illustrated by "fractal computer graphics," conform to the trope "delirious dreams and fallacious figments."

The credits for RENEGADE note that the film is only "loosely adapted" from the famous Franco-Belgian comic book feature, "Lt. Blueberry," by Charlier/Moebius.  I've read a fair number of these western comics but have only seen Blueberry having naturalistic adventures.  Director/co-writer Jan Kounen reframes the hero Mike Donovan-- never called "Blueberry" in the English version as in the comic-- as a character implicated in the religious beliefs of Native Americans, specifically the Chiricahua Apaches.

As a young man Donovan visits an equally young prostitute.  They build a certain affection beyond the purely monetary interest, but some drunken yahoos, led by Wallace Blount, break into the hooker's bedroom, wanting to be serviced.  Donovan and Blount get into a fight.  The young prostitute is fatally shot, Blount is burned when a fire breaks out, and Donovan, after being shot as well, is left for dead in the desert.  Donovan's life is preserved when Runi, an Apache shaman, decides to use Apache sorcery to save his life.  Donovan is saved after having undergone a "ritual death" at least in a figurative sense, and later returns to his own people.  In his mature years Donovan (Vincent Cassel) becomes a marshal of an unnamed western town, though he maintains a sympathetic relationship with the local natives.

Trouble begins when gold-hungry white men set their sights on a sacred mountain worshipped by the Apaches.  The schemers make a minor attempt to set up a conflict between the townspeople and the Apaches, but this never gets off the ground, due to Donovan's investigations. Runi warns Donovan that a "white sorcerer" plans to seek out the holy mountain in search of some great secret.  Shortly afterward, a much older Wallace Blount (Michael Madsen) arrives in town and shoots a fellow who's threatening one of his gang-members, earning himself a stay in jail.  It takes Donovan a few minutes, but in a rush of repressed memories, he finally recognizes Blount from their previous encounter.  He goes after Blount to kill him, but Blount's gang breaks him out and they go off to find the gold-- aside from Blount, who has other fish to fry.  Eventually it's revealed that as the result of his burn-injuries Blount too went through a "ritual death."  The villain isn't presented as overtly psychic-- though he does seem to exert a hypnotic influence over one Apache female-- but somehow he's formed the conviction that there's a great secret he wants from the mountain.

Donovan strikes off in pursuit, and the film concludes with a very psychedelic "combat" in which both Donovan and Blount join in a shared trance, apparently (according to Wikipedia) using the psychotropic plant *ayahuasca.*  It's not much of a combat, though.  The trippy action is hard to follow, but the gist seems to be that Blount isn't sufficiently prepared for the ordeal, so that he simply "blows up."  Donovan, possibly because he's been semi-initiated into Apache rites, survives the experience.

In addition to Cassel and Madsen the film includes several other well-known actors, including Juliette Lewis and her father Geoffrey, Djimon Hounsou, and Ernest Borgnine, but none of the performances are particularly stellar.  The script is far too concerned with setting up the admittedly excellent psychedelic effects, and as a result proves slack in dealing with the motivations of its hero, its villain, and almost everyone else, except maybe those of Blount's money-hungry partner Prosit, who insists that he deserves respect for his Prussian background.


Posted by Gene Phillips at 3:11 PM
Email ThisBlogThis!Share to TwitterShare to FacebookShare to Pinterest
Labels: combative adventures, delirious dreams and fallacious figments (u), the uncanny