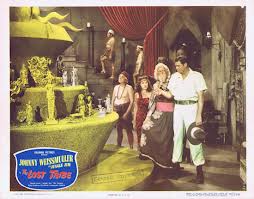 
THE LOST TRIBE was the second of Columbia's "Jungle Jim" series.  Like the first film, TRIBE is a moderately lively cut-rate entry, in which old jungle hand Jim is called upon to save the hidden city of Zom from jewel-hungry white interlopers.  Like the first film, it also dresses up the film with two females, one a white woman from the outside world and the other an "exotic" who looks like she escaped from a South Sea Island picture, though ostensibly the story is set in Africa.

This time the black African characters remain pretty much in the background.  Like the majority of fictional lost cities set in Africa, Zom's few inhabitants are either Caucasian or very close to that model (Elena Verdugo, who plays the exotic female "Li Wanna.," was of Hispanic extraction).  Just to stir the pot a tiny bit, this time the white girl is an evildoer.  She uses her feminine charms to fuddle the young son of the ruler of Zom and gets him to reveal the city's location.  She does make a belated attempt to change and to free Jungle Jim from captivity, but meets a fairly brutal fate, being knifed to death by one of her thieving allies.

The city of Zom may be one of the most desultory depictions of a lost city on film, perhaps even beating out THE HIDDEN CITY.  Like that film TRIBE belongs to the "exotic lands and customs" trope, though to be sure Zom isn't especially "exotic" compared to most lost cities.  As the photo above shows, Zom's specialty is making all sorts of mini-statues studded with priceless diamonds, which in the photo are displayed on what looks like a mockup of a water-fountain.  Jungle Jim asks Zom's ruler as to whether his people worship the statues, and the king responds like a good Protestant: they don't worship the idols, but only use them as symbols of a higher power.  Yes, Jungle Jim: always be sure that the natives you're protecting have the "right" belief-systems before you save them from venal white guys.

The film also includes the performance of an "astounding animal," a female gorilla-- patently a man in a gorilla suit-- who joins Jungle Jim's side after he saves her and her offspring from a lion.  Just to show how drunk the writer was, he has Jim dub the gorilla "Simba," which means "lion" in Swahili and has been used to connote lions in dozens of other crummy jungle-films before this-- so the LOST TRIBE guy couldn't even get THAT right .  The gorilla gets the best fights against the human bad guys, though Jungle Jim proves his manhood by killing two or three jungle-beasts.


Posted by Gene Phillips at 1:44 PM
Email ThisBlogThis!Share to TwitterShare to FacebookShare to Pinterest
Labels: astounding animals (u), combative adventures, exotic lands and customs (u), the uncanny