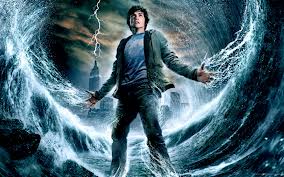 
I haven't read the Rick Riordan books that spawned the Percy Jackson films, though I'm aware of some of the major differences, particularly with regard to the upgrading of the main characters' ages from about 12 to about 17.  I have no idea if Riordan was influenced by J.K. Rowling, but there's no question that the JACKSON films have been stylistically modeled after the POTTER films.  Chris Columbus, who produced three POTTER films and directed two of them, produced the two JACKSONs and directed the first one.

Columbus' film, LIGHTNING THIEF, didn't do much for me the first time around.  In a recent re-watch I didn't discover any new subtleties.  A young hero is attacked by mysterious monsters and his mother is kidnapped.  He learns of his godly parentage; specifically, that his father is the ancient Greek sea-god Poseidon. He's finds that he's falsely accused of stealing one of the lightning bolts of Zeus, King of the Gods, and that there will be dire consequences if the bolt is not returned.  He forms a small coterie of allies-- Grover the Satyr, Annabeth the daughter of Athena-- and goes in search of the stolen lightning.

The actors playing Percy, Grover and Annabeth are all attractive and bring a strong sense of conviction to the material, but there's very little depth in the script's handling of myth, or even much wonder.  Much like the first two POTTER films, Columbus does a journeyman job with the magic and the mystery.  Many familiar mythic personages are trotted out by the script: in addition to those named, we also meet Hades, Persephone, and Medusa.  Medusa comes to closest to evoking the complexities of archaic myth: during a fight with the three demigod-teens, the snake-haired witch tells Percy, "I used to date your daddy."  "Dating" is not really an adequate description of the relationship of Medusa and Poseidon in archaic myth, but it was worth a smile.  It's of minor interest that Percy and Annabeth owe their parentage to Poseidon and Athena, who were usually rivals in Greek stories, not least the best-known version of the Medusa tale.  But I can't fault Columbus for not doing more with this mythologem, since I very much doubt Riordan did either.  Many of the big FX-scenes fell somewhat flat, with the exception of a scene where the teens get distracted from the quest by a "lotus eaters" peril, getting drawn into an eternal Vegas club-scene-- all set to the amusing tune of "Poker Face."

Ironically, the two scenes I liked best were deleted from the original release and included only on the DVD: a fight-scene in which the satyr character kicks some badguy booty, and one in which the villain Hades explains his festering discontent with having been made custodian of his joyless death-realm. 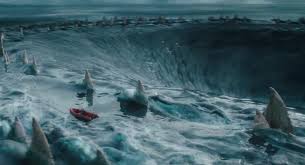 Oddly, the first POTTER film not to be directed by Columbus seemed to have a more vivid visual style, and the same is the case with the first JACKSON film by another director, Thor Freudenthal.  I wouldn't say the storyline is any more complex, though: it's just another quest-story content to revisit the best-known Greek myths, at least on a superficial level.  This time, Percy must save "Camp Half Blood"-- sort of a "Hogwarts reimagined as a training-ground"-- and can only do so if he and his friends can find the Golden Fleece. In this sojourn he's joined by two new allies in addition to Annabeth and Grover: girl-bully Clarisse-- who's more of a nemesis in the books-- and Tyson, a young cyclops who turns out to be another son of Poseidon, and therefore Percy's half-brother.

Though the myths are dealt with any greater complexity, Freudenthal and Co. devise a much better selection of "wonder moments."  It may be that the SEA OF MONSTERS book is richer in such scenes than Riordan's LIGHTNING THIEF, but Freudenthal also takes more time to develop such scenes cinematically.  I particularly liked the scene of Percy and his friends falling into the oceanic mouth of Charybdis, a scene wherein Percy rides the back of a sea-horse, and the heroes' encounters with a full-blood cyclops, who's a good deal more formidable than Tyson.  For good measure, Percy must deal with having a brother he'd never known of, and the inevitable fear that Daddy may find more favor with the "new" sibling.  Only at the climax does Freudenthal lose some steam: the good guys' final confrontation with the god Kronos is not any better or worse than the fight between Percy and his demigod adversary at the conclusion of LIGHTNING THIEF.

The JACKSON films are good formulaic works.  They entertain well enough, but they don't show the deeper currents I've frequently located in, say, the fantasy-films of Ray Harryhausen.


Posted by Gene Phillips at 2:41 PM
Email ThisBlogThis!Share to TwitterShare to FacebookShare to Pinterest
Labels: combative adventures, the marvelous