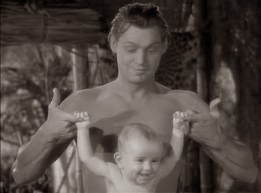 
TARZAN FINDS A SON! is a decent enough Tarzan film, but it's not quite as strong as its predecessors.  As yet the filmmakers still haven't taken the logical step-- to come up with some legerdemain to get Tarzan and Jane legally married-- and so they must find and adopt a son, the only survivor of a plane crash.

Interestingly the parents of the infant-- seen only briefly on the plane-- are relatives of a "Lord Greystoke," which as all Tarzan-philes know was the true name of Tarzan before his adoption by apes-- an origin which, surprisingly, the filmmakers barely ever reference directly.  Allegedly Burroughs set strict limits on what they could adapt from his books.  Still, I can't help but wonder if the "Greystoke" reference was some writer's idea of tying in the baby to the line from which Tarzan himself descended-- so that, in time, Boy would be seen to be a real relative of the ape man.  But if so, the idea was never pursued.  The two parents barely register as characters before they're killed, but the script does give them a nice moment where the mother wishes they wouldn't reach their destination, and her husband asks her not to say that.

Through a roundabout series of events, the parentless baby finds its way into the hands of Tarzan and Jane.  The sequence by which Jane instills fatherly feeling in Tarzan-- who initially resents the infant as competition for Jane's attention-- is the strongest section in the film.  Jane finds the downed plane and learns that the bodies have been stolen by natives for their rites, so that she feels free to adopt the child.  Naturally "Boy"-- as Tarzan decisively dubs the child-- becomes a miniature Tarzan, swinging from high vines and plunging into the local rivers-- which naturally leads to incidents where Tarzan must rescue him, as he rescued Jane before.

Again we have an intruding safari motivated by filthy lucre, but as in ESCAPES, they're relatives of a rich family, and they want to ascertain the deaths of the Greystoke couple in order to keep their own control of the Greystoke wealth.  The married couple the Lancings have no scruples in this regard, but noble Sir Thomas sincerely wants to know about the fate of his relations.  He observes family resemblances in Boy, but he initially wants to let him stay with the couple that loves and nurtures him.  However, the Lancings figure out that they can use Boy to control the wealth if they take him back to England.  They manage to play on Jane's concern for her adopted son not long after Boy survives one of the jungle's many dangers.  In the first of Jane's many headstrong rebellions against Tarzan's instinctive wisdom, she traps her husband in a chasm to prevent him from interfering.

However, before Jane can even find out the scurrilous nature of the Lancings, she and their party are captured by ruthless natives who specialize in shrinking not just heads, but whole bodies.  ("That was once a full-grown man," observes a guide of a pygmy-sized corpse.)  After the whole group has been taken prisoner, Jane instructs Boy to go find Tarzan.  When he makes a run for it, she uses her own body to shield him from a native's spear.

MGM initially intended to remove Jane from the story with this development, but advance screenings of Jane's death-scene provokes outrage.  Thus Jane survives, Tarzan's elephants once more arrive to beat the hell out of the nasty natives, and the scheming relatives, despite all their sins, are allowed to return to civilization empty-handed.

Posted by Gene Phillips at 3:17 PM
Email ThisBlogThis!Share to TwitterShare to FacebookShare to Pinterest
Labels: bizarre crimes and crimefighting (u), combative adventures, exotic lands and customs (u), outre outfits (u), superlative skills (u), the uncanny