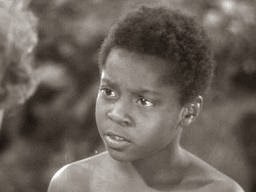 
Although TARZAN'S SECRET TREASURE still boasts A-level production values, it's a much more predictable script.  One DVD commentary asserted that MGM wanted to kill off Jane in TARZAN FINDS A SON! in order to shake up the status quo.  Thanks to pre-screenings by audiences who didn't want Jane to die, she survived-- and TREASURE's script almost seems poised to say, "See, we told you things would get dull if you bosses didn't let us kill Jane!"

The first three Tarzan films stress the dreadful consequences that would befall Tarzan if Jane were taken away.  The introduction of Boy allowed the scripters to focus on him instead, and like SON the last two MGM Tarzans focus on the consequences of Boy's possible loss.

As in all the previous films, money is the root of every evil that invades the jungle paradise of Tarzan and Jane.  This time, instead of ivory, there's gold in Tarzan's hills.  Jane, in trying to explain the significance of gold in the civilizations of the outside world, unintentionally introduces the serpent into her own Eden, for Boy promptly takes a few nuggets of gold and departs for civilization, giddy with the thought of the new purchases he can make.

An altruistic impulse saves Boy from white man's civilization. He sees a young black boy of his own age, busy being chased by a cranky rhinoceros.  Boy diverts the rhino and makes the acquaintance of the native boy Tumbo.  On accompanying Tumbo back to the native boy's village, Boy gets a nasty taste of civlization at the tribal level.  Though Tumbo is unspoiled by his elders' superstitions, the natives-- who happen to be suffering a plague outbreak-- make up their minds that the strange white boy brought the disease into their midst.  Before Tumbo's people can burn Boy at the stake, he's rescued by a safari made up of two good white men and two bad white men.  Tarzan in turn saves the safari from the natives, and takes the white men to safety along with Boy. Tumbo goes along too, for his mother has perished of the plague and so he implicitly has no one to care for him.

Soon enough the bad white men learn about the gold.  Tarzan will countenance no mining-operations in his Eden, so the villains kidnap Jane and Boy.  One of them also manages to wing Tarzan with a rifle-shot, so that the ape-man falls into a ravine.  Tarzan survives, of course, but he's trapped in a ravine with no escape, much as he was in TARZAN FINDS A SON!  Tumbo and one of the good white men, played by familiar Classic Hollywood face Barry Fitzgerald, rescue Tarzan.  While the ape man escapes, the villains-- who have killed off the other good white guy, and who still have Jane and Boy in tow-- are ambushed by another group of natives.  They're apparently supposed to be the same ones from ESCAPES who have the sadistic habit of tying victims between two trees so that the trees will tear them in half.  They're also called "water devils" for no good reason, except that they decide not to kill everyone on the spot, and instead take them to their village for further torture via a group of canoes.  This sets up the film's best scene, when Tarzan and his elephant-buddies show up to attack the natvies' canoes in midstream.  Boy and Jane are saved, the villains are eaten by crocodiles, and Barry Fitzgerald's character survives to go home, with the nice touch that Tarzan and Jane slip some gold into his pack to help him out financially.

Oddly, Tumbo is still with Tarzan, Jane and Boy in the last scene.  It's very unlikely that any of the filmmakers had any idea of keeping Tumbo around in later entries-- and indeed, there's no mention of the kid in any other Tarzan film-- so why not add some explanation that he's going to be returned to his people, or that the droll Irishman will take him into town to be adopted?  Perhaps the writers simply didn't give the kid that much thought.  Though Tumbo doesn't speak English and so is rendered effectively silent for most of the film, he does get the honor of helping to save the hero and thus making his heroics possible, and he's treated as essentially courageous and intelligent.  True, the Irishman does refer to Tumbo as a "pickaninny," but since he does so affectionately-- just as the two of them are about to be eaten by a lion-- the term's context seems more descriptive than deliberately insulting.


Posted by Gene Phillips at 1:38 PM
Email ThisBlogThis!Share to TwitterShare to FacebookShare to Pinterest
Labels: bizarre crimes and crimefighting (u), combative adventures, exotic lands and customs (u), outre outfits (u), superlative skills (u), the uncanny