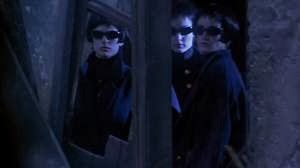 
I've already stated my moderately charitable opinion of cult-journeyman director Albert Pyun in my review of his CYBORG, but OMEGA DOOM strains that moderately favorable opinion.

The funny thing is that there was potential in Pyun's script for this dull-as-dirt SF-film.  Though allegedly it was originally going to be about berserk animatronic robots a la WESTWORLD, it ended up more like a cross between two well renowned stories.  One is Kurosawa's YOJIMBO, in which a tough stranger rolls into town and gets involved with two feuding gangs.  The other is Philip K. Dick's story "Second Variety"-- basis of the minor 1995 SF-flick SCREAMERS-- in which humans are being exterminated by assorted robot entities.  The story ends with the indication that the various robot-models will soon be warring on one another, but with some effort Pyun could've had some fun imagining how such a "war of rival robots" might play out.

Though in 1996 Rutger Hauer no longer sported the sleek figure of his classic BLADE RUNNER performance, he still displayed enough charisma to pull off the "Yojimbo" role, that of a killer android who is accidentally de-programmed, so that he develops a conscience in consequence.  But Pyun gives Hauer nothing with which to work.  This is just barely an "adventure" movie.  Both groups of rival automatons-- the Bots and the Droids-- wear freaky clothes and talk in monotones, and there's no consistent dividing-line between the two.  The Bots in particular look like girls from a Robert Palmer video, all dressed in dark clothes and dark glasses.  The principal Droid is played by lissome Shannon Whirry, who gives the unrewarding role as much as she can, but like Hauer she can only pose and recite Pyun's turgid, graceless dialogue.  There are one or two fights or shootouts, but the action seems improvised, and I suspect there was no money spent on a good fight-coordinator.

This rates as cosmological only because it implies the theme of mechanical beings taking on sentience.  But Pyun does nothing with the idea.
Posted by Gene Phillips at 4:40 PM
Email ThisBlogThis!Share to TwitterShare to FacebookShare to Pinterest
Labels: combative adventures, the marvelous