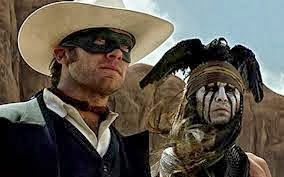 
It would be pointless to attempt a plot-based review of Gore Verbinski's LONE RANGER. That's not because it doesn't have a plot.  But as with many over-the-top summer blockbuster adventure-films, the movie's plot is secondary to its breadth of spectacle.  And Verbinski does deliver heaps of wild spectacle, as wild as those found in any other adventure-film, from RAIDERS OF THE LOST ARK to RIKI-OH.

However, Verbinski's RANGER is not an adventure-film, which may be a partial reason that audiences of this 2013 summer rejected it at the box office.   Many moviegoers probably wanted a straightforward revival of the "Masked Rider of the Plains and his faithful Indian companion." Alternately, some might have welcomed an exclusively comic sendup of the characters, something along the lines of Tim Burton's spoofy 2012 retelling of the teleseries DARK SHADOWS.

RANGER does contain many scenes, successful and otherwise, designed to provoke laughter, but the movie is not a comedy any more than it's an adventure-story.  Verbinski's RANGER belongs to the literary type Northrop Frye terms an "irony," a state of being where the protagonist's power to take effective action is at its lowest ebb.

"Nature is out of balance."  Johnny Depp's deranged Tonto states this many times in the film. The line's reasonably effective in drawing laughs.  But though Tonto is crazy, he's not wrong.  RANGER is full of images of disarray and chaos, far beyond the level seen in most adventure or comedy films.  There's the broken pocket-watch that Tonto obsessively carries with him, a symbol that time itself is out of joint.  There's the horse Silver, whom Tonto believes to be a messenger from the spirit-world, but a very stupid one, because the horse chooses the wrong man to be the heroic emissary of justice.  There's a hooker who has, not a heart of gold, but a leg of ivory, and there's the chief of the Comanches, who tells the Ranger that his people are already "ghosts," not long before they are wiped out by a dead ringer for General Custer.  This is, in short, an insane world in which human action is meaningless, constantly undercut by uncertainty and outright deception.  This is not a world in which an altruistic white man and a noble red savage can become brothers, and can represent progressive justice with a gleaming silver bullet. In this world the Ranger is a clueless, good-hearted bungler and his reluctant companion is a crazy man who constantly tries to feeds the dead bird he wears on his head.


In a pure adventure, the world is renewed when Indiana Jones-- with a little help from his sidekick, God-- exterminates a band of blasphemous Nazis.  The world of Burton's Barnabas is more ludicrous, but even here, Barnabas and his family triumph over the bane of their line, the witch Angelique.  In the world of the irony-- as well as that of irony's more serious sibling, the drama-- virtue and meaning rarely enjoy such clear-cut resolutions.

Nothing in RANGER shows more ambivalence than the Ranger himself.  The traditional Lone Ranger is a pillar of rectitude, surviving death to appoint himself the incarnation of western justice, and the traditional Tonto joins him to illustrate the potential brotherhood of white man and red man,  Verbinksi gives us a Ranger whose iconic aspects-- the mask, the silver bullets-- are almost all dreamed up by Tonto's fevered brain.  But Tonto has almost nothing to work with.  Verbinski's "John Reid" bears less kinship with the Lone Ranger than with Voltaire's "Candide," the eternal naif who keeps trying to believe in human goodness no matter how much evil he witnesses.  And John Reid is not only naive; he's established as smugly self-righteous and foolhardy in his first encounter with Tonto.  He can barely shoot; all of his "trick shots" are pure lucky accidents, and his ability at hand-to-hand combat is modest at best. His only claim to being a mythic hero is that the horse Silver-- who propels this western into the marvelous realm by displaying feats and intelligence beyond the ken of horse-kind-- believes that he is a hero.  And because the spirit-messenger believes it, Tonto tries to believe it, though he would rather have worked with John's courageous-but-dead brother Dan.  Hence he calls John "kemosabe"-- "wrong brother"-- yet another indication that even the spirit-world is, like nature, out of tune.

Now, the fact that I've endeavored to explain Verbinski's work by categorizing it as an "irony" does not mean that I necessarily consider it a GOOD ironic work.  Some of Verbinski's ironic touches-- a sole bird of prey peacefully skimming the skies before and after the slaughter of Dan Reid's ranger unit-- are entrancing, thanks in part to dynamite locale-selection.  Other touches are less beguiling.  Verbinski seems to think that all he must do is pile on more and more excessive set-pieces in order to keep the audience happy and buffaloed.  But though American (and other) audiences have embraced films far more noisy and incoherent than this LONE RANGER, they usually will not do so unless they feel that the director has let them in on the joke.  Even the Ranger's basic appearance sets up a confusing-- and not at all intriguing-- puzzle: "Yeah, he's got the white hat and the mask, but why's he wearing the clothes of some eastern dude?"  No matter how often the musicians crank up their version of the William Tell Overture, there are too many discontinuities in LONE RANGER for even young audiences to embrace John Reid as their Lone Ranger, even to the extent that some audiences of the 1960s embraced the somewhat-ironized Batman of the ABC teleseries as "their Batman."   The narrative is also further confused by a framing-device, in which the main story is narrated by an eighty-year-old Tonto in the year 1933. The device proves a waste of time, though it's a nice touch to set it in the year when Tonto and the Ranger were "born."

Problematic though Verbinksi's IRONIC RANGER is, it is more entertaining than most of the mediocre "straight" adaptations, such as the plodding 1981 LEGEND OF THE LONE RANGER and the disastrous 2003 telemovie.  Then again, none of them can touch the mask of the real Lone Ranger.

FOLLOW-UP: On re-viewing the film, it belatedly occurred to me that it never explicitly affirms whether or not the marvelous happenings of this "Ranger revision" happen the way their narrator says they did. When the aged Tonto tells his version of the "Lone Ranger and Tonto" story to a young boy who only knows the canonical narrative, this framing-sequence is all that we as viewers know of the film's "reality." At the end the boy asserts that Tonto's version is "just a story." Tonto replies that the story's reality is "up to you," which is implicitly Verbinski's response to anyone who might not like his irony-ranger.  Verbinski's script then tosses out two highly dubious confirmations of the story. First Tonto, just before he departs the Wild West exhibit, hands the boy a silver bullet. Then, as a pay-off to all the sequences in which crazy Tonto kept trying to feed the dead blackbird on his head, the boy sees a living blackbird appear in the exhibit-- though this is still pretty ambivalent "evidence." In no way does it approach the level of the conclusive evidence for the marvelous seen in 1947's MIRACLE ON 34TH STREET.

The 2013 LONE RANGER, then, is the first film I've reviewed in which a "fallacious figment" takes the form of a narrative propounded by a "real" person. The closest I've come was in my review of 1952's HANS CHRISTIAN ANDERSEN, and I found that to be a naturalistic version of this trope. In this review I said:

In my phenomenological system, a film qualifies for the status of “uncanny” if it presents dreams with such fidelity that they have their own reality within the film’s diegesis.  HANS CHRISTIAN ANDERSEN does not do this... In terms of my system, a bunch of stage-players enacting a play with fantastic content uses my trope “delirious dreams and fallacious fantasies” purely in a naturalistic manner, since in such scenarios the real-life framing-story nullifies the fantastic content.


I need to modify this statement a little with respect to the telling of stories, a more controlled form of "dreaming." At no time does the viewer of ANDERSEN see the story performed in the ballet take on its own independent identity: the ballet is always secondary to the primary, realistic narrative. But in LONE RANGER, it's arguable that the fantasy-story related by Tonto is really the primary narrative, and that the frame-story is just there to make its fantastic content somewhat dubious.  A similar, though not identical, situation evolves in the 1987 PRINCESS BRIDE. There's no doubt in BRIDE that the people reading/listening to the story are real, but nevertheless it's the dream of a world with monsters and fabulous swordplay that is the primary attraction.  Though LONE RANGER is ambivalent about the fantastic narrative's factuality and PRINCESS BRIDE is not, what renders both "uncanny" is this focus on the primacy of the fantasy.
Posted by Gene Phillips at 2:58 PM
Email ThisBlogThis!Share to TwitterShare to FacebookShare to Pinterest
Labels: combative ironies, delirious dreams and fallacious figments (u), the uncanny