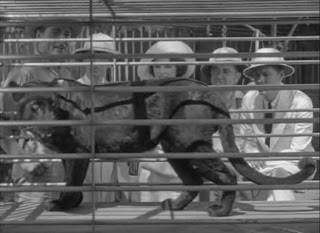 TARZAN ESCAPES, third in MGM's series and the last one before "Boy" was introduced, takes most of its cues from the previous entry, though with several new permuations.  Again a safari of Europeans-- headed by Jane's cousins-- ventures into Tarzan's territory with the intention of taking Jane away, and again this "woman-theft" is associated with making money.  But to avoid repeating yet another attempt on the elephants' graveyard, the cousins don't want to take wealth from Africa; they want Jane to come back to England so that they can secure an inheritance.  They also have a desire to bring Jane back to her homeland because they just don't feel she belongs in Africa with a near-naked white savage.

Instead of a villainous ivory-hunter, this time it's a villainous trapper, name of Fry.  He's less well developed than the previous film's villain, and his desire to put Tarzan in a cage and exhibit him-- as Fry does with the animals he captures-- seems ill-conceived.  Still, trappers are perhaps even a better type of foe for Tarzan than simple hunters, for trappers represent the forces of civilization that hem in nature, and so oppose the virtues of Tarzan and his wild freedom.  Interestingly, when Jane considers returning to England to help her cousins, she speaks of her obligation to them as a "trap."

Like TARZAN AND HIS MATE, the purpose of the film is to celebrate the rare romantic bliss of Tarzan and Jane, and in some ways ESCAPES exceeds MATE in this respect.  Tarzan is deeply hurt by the possibility that Jane may leave him, even for a short time, and Johnny Weismuller, whose portrayal of Tarzan was somewhat one-dimensional in previous films, communicates his woundedness with an almost childlike soulfulness.  The couple's sexiness is toned down somewhat, which is a natural consequence of the theme of threatened separation, but director Richard Thorpe still arranges one scene of masterful understatement.  Jane, playing with a flower by a riverbank, is approached by Tarzan.  Her face changes to an expression of anticipation, and the camera pans away from her as she allows the flower to drift away on the river-- quite as good an image of sexual activity as the falling of Persephone's flowers after her "rape" by Hades.

ESCAPES is notorious for having been almost entirely reshot due to negative audience reactions to an early version.  There is some strong violence in the reshot version, particularly when an evil African tribe ties one of its victims between two bent-over trees and then let the trees implicitly tear the man in half.  If Thorpe and his crew left this in, one can only wonder what they left out.  The only thing  we know got left out was a scene in which Tarzan, Jane and the safari-members attempt to return to their hidden land through a misty swamp.  Originally the party was supposed to encounter vampire bats and nasty pygmies, but the sequence was axed and dropped, though the redone version does include some giant lizard-creatures.  I debated as to whether to consider them "marvelous" entities, but since the lizards are about the size of Komodo dragons, it's possible that their origins are not quite so distanced from regular reality.  Fry, after having conspired to cage Tarzan and lying to him about Jane wishing to help trap him, meets his fitting doom by getting "trapped" in the deadly swamp.  The cousins reveal that Jane doesn't really have to come back to England, and they take their leave, while once more Tarzan and Jane are happily reconciled.

This is also the first film to start the overemphasis on Cheetah's antics for almost all the comedy relief, which some may like better than I.

Posted by Gene Phillips at 2:49 PM
Email ThisBlogThis!Share to TwitterShare to FacebookShare to Pinterest
Labels: bizarre crimes and crimefighting (u), combative adventures, exotic lands and customs (u), outre outfits (u), superlative skills (u), the uncanny