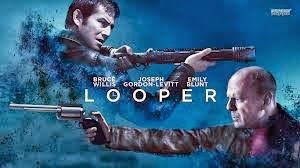 
LOOPER is an earnest attempt to resuscitate that category of SF that has been called "thinking man's science fiction."  Writer-director Rian Johnson must be credited with an interesting twist on a familiar film noir trope.  But here, instead of a protagonist investigating a crime and finding out that he himself committed the crime-- and has forgotten it due to some memory-lapse-- here we have a protagonist who realizes that his future self is out to commit a crime, one that springs from his own current-day obsessions.

The bulk of the story takes place in 2044, in which there have been a few changes to the current status of scientific developments.  For one thing, telekinesis has been reliably detected in rare individuals, though it remains a minor talent at best.  For another, though time-travel has not yet been invented, 2044 sometimes gets visitations from the era that has made that breakthrough, 2074.  This future-era is never seen in detail, and one has to take it on faith that in Johnson's world certain criminals have somehow got hold of a time-travel device.  Though on occasion they send individuals back in time to serve as crime-bosses in 2044, the future-criminals' main use of the technology is for the purpose of sending back condemned victims to be executed by hired assassins in 2044, men who are called "loopers," apparently because they close a particular time-loop by ending the life of a 2074 man in 2044.

Joe (no surname), played by Joseph Gordon-Levitt, is an experienced looper, despite being in his twenties.  He was initiated into the business by an older man, Abe, who is one of the future-travelers who now rules his own gang in 2044.  Joe is innured to a rouine in which he executes whatever person the future-crooks send back to his time, and then hides the bodies.  The efficiency of this body-disposal process seems questionable: isn't it likely that the dead body of someone still alive in, say, 2072 might turn up and incriminate those who *will* have that person killed? But the main purpose of this complicated process is to implicate Joe in a corrupt business endeavor, and then force him to question how far he'll go to keep his ill-gotten gains.

For Joe does not wish to remain in the hitman-business; he simply wants to accumulate a good stash of money, in the time-honored tradition of the Protestant work-ethic.  Then Seth, one of Joe's hitman-friends, fails to kill a target because he realizes that it is his own future-self.  Joe chooses not to shield his friend from Abe's goons because Abe threatens to take possession of Joe's stash of money.  But soon Joe suffers the same predicament.  For in no time, Joe has the exact same experience as Seth: the target he's supposed to kill is "Old Joe" (Bruce Willis), his future self from thirty years later.  And once Joe has failed to kill Old Joe, "Young Joe" eventually learns that his future self plans to kill the crime-boss he holds responsible both for trying to kill him and for successfully killing his wife in 2074.  This means Old Joe will kill a child before that child has the chance to grow up and become that crime-boss.

Time-travel stories usually concern the potential effects of changing crucial events in a given time-period.  Johnson is not interested in the usual "step-on-a-bug/cause-the-rebirth-of-the-Third-Reich."  Rather, LOOPER is entirely about personal consequences.  Indeed, the biggest irony of the film is one dealing with the state of Joe's romantic life.  Though he has liaisons in his time with a hooker named Sara, she keeps him at arm's length.  However, it's revealed that she is the mother of the 2044 child whom Old Joe wants to kill.  This forces Young Joe to act as protector to Sara and her young boy, who, just for good measure, happens to possess the aforementioned power of telekinesis, but to the degree that he can hurl people around and cause explosions.  Young Joe's protective act binds him to Sara in a way that he could not achieved had Old Joe never posed a threat.  However, Old Joe never knew Sara to the extent that Young Joe does, simply because in Old Joe's original timeline he never formed a liaison with Sara but left for Shanghai, where he would meet and marry another woman, the wife he seeks to save by killing another woman's child.

LOOPER is a skillful balancing-act, but though it's pleasing it never becomes rivetting.  Although Johnson worked out reasonably credible histories for Young Joe, Old Joe, Sara and her boy, they're all a little too schematic and convey no individuality.  There are some good noir-ish lines, particularly when Young Joe-- who becomes a paternal substitute to the boy-- tries to explain what makes men the way they are:

“It’s just men trying to figure out what they gotta do to keep what they got. That’s the only kind of man there is.”

This is, incidentally, a good thematic statement for the literary type I've called the "demihero:" a protagonist who, unlike the hero, is motivated principally by the need to survive.  Arguably at the film's end Young Joe does save the youngster through an act of heroism.  But his character, first and foremost, is determined by the need to protect "what he's got"-- and this time, instead of ill-gotten gains, he's protecting the future of Sara and her boy, who have become his faux-family.  By saving them, even at the cost of his own life, he essentially saves himself as well.
Posted by Gene Phillips at 2:53 PM
Email ThisBlogThis!Share to TwitterShare to FacebookShare to Pinterest
Labels: combative dramas, the marvelous