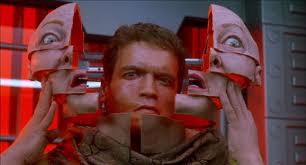 
Though Philip K. Dick's stories are usually more complex than the movies they spawn, this generalization does not apply to his original 1966 tale "We Can Remember It for You Wholesale."  This short story includes three of Dick's favorite themes-- a character's paranoia-flavored pursuit by hostile powers, his loss of identity, and the blurring of distinctions between dreams and reality.  Yet the parts do not exceed the whole.  Dick's story of a lowly clerk whose identity is a fictional implant by the agents of the government, and who discovers this truth, sets up a vivid problem and then resolves through a device that amounts to little more than a shaggy-dog story.

Director Paul Verhoeven and a team of four credited writers-- one of whom was the celebrated Dan O'Bannon-- expanded the bare bones of Dick's original story.  The final script became a high-intensity action-adventure vehicle for Arnold Schwarzenegger.  Lowly wage-slave Douglas Quaid (changed from Dick's name "Douglas Quail") finds out that he was once a secret agent for the evil governor of the Mars Colony, Vilos Cohaagen (Ronny Cox).  One of Cohaagen's agents, Lori (Sharon Stone), even marries Quaid in order to bolster Quaid's belief in his implanted identity.  As if he's subconsciously rebelling against the fictional ID, Quaid begins to have dreams of Mars, dreams which include a beautiful brunette who doesn't resemble Lori in the least.  This is one of the most substantial improvements on the original.  In Dick's story, Quail's wife briefly accuses Quail of dreaming about other women, but he has not in truth done so, while she is not an agent, just a shrew who deserts Quail because she deems him a loser.  Lori, in contrast, realizes that Quaid's Martian dreams constitute a rebellion against his false memories.

Whereas Dick's character only briefly rebels against the authorities who pursue him, and then gives in for sake of the story's shaggy-dog conclusion, Quaid goes on the run like a steroid version of NORTH BY NORTHWEST's Roger Thornhill.  However, that's not to say that RECALL is simply a pulpish indulgence in pure violence, a la 1985's COMMANDO.  Verhoeven and his writers build a very Dickian world, in which the villains are a Marxist's dream, always in hot pursuit of filthy lucre and willing to tyrannize over anyone who gets in their way.  Coohaagen keeps all of Mars under his thumb due to his control of the imported air franchise, and his mining of a precious metal creates hideous mutations who are even more marginalized than the normal Martian citizens.  There's also a guerilla rebellion on Mars, whose opposition plays into Cohaagen's plans for Quaid. Verhoeven uses the mutants for considerable shock value, as with the "three-breasted" hooker, who alone shows up in the squeaky-clean 2012 remake. Yet they have meaning on another level as well: they are the "wretched refuse" who initially look disgusting but are eventually seen as more valorous than many "normals."  In addition, some of the mutants also possess psychic powers, which adheres to Dick's tendency to associate super-normal mental states with abnormal individuals.

I won't dwell on the intricacies of Cohaagen's overall plot.  It has its own share of "refrigerator moments," as Hitchcock calls them, but it's more believable than the original story by far.  Schwarzenegger does quite well in the role, particularly in his early scenes where he believes himself married to a loving wife but has a lustful relationship with the woman of his dreams-- who, of course, is as real as his secret-agent persona.  This is a great improvement over the original story, where the protagonist desires to escape to Mars but has no interest in playing around on his shrewish wife.  It's also of psychological interest that Quaid's "false identity" comes to be a better man than his original, corrupt identity-- sort of a case of a "son" outdoing a "father," even though they're the same person.  Michael Ironside, as Cohaagen's main henchman, provides a good brawl with Quaid and "bad wife" Stone has a kickass fight with "good girlfriend" Rachel Ticotin.  As with Verhoeven's ROBOCOP, this is a rousing adventure that makes limited use of irony for its humor, but is not an actual ironic text like the director's 1997 STARSHIP TROOPERS.


My only major criticism of the 1990 film is a familiar one: I don't see why Jerry Goldsmith should have won any sort of award for a score that blatantly mimics the score for 1982's CONAN THE BARBARIAN. 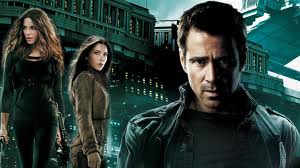 In contrast, Len Wiseman's 2012 remake of the 1990 film is a sterile time-waster. It's not surprising that Wiseman and his writer-team ditched the idea of the Mars-mutants, for in essence Wiseman is devoted to showing a lot of really pretty people running around shooting at and fighting with each other-- mostly Colin Farrell (as Quaid), Jessica Beil (as Melina, the "good girlfriend"), and Kate Beckinsale (as "bad wife" Lori).  This concentration on hot-bods may become clearer when one knows that Beckinsale also happens to be married to Wiseman and has starred in the UNDERWORLD franchise Wiseman co-created.  Now I don't want to sound like one of those Puritans who can only enjoy violence when it's linked to some serious theme.  On the contrary, I enjoy such pulp-fun-- seen both in Wiseman's UNDERWORLD and the earlier-cited COMMANDO-- when it's well done.

Wiseman's RECALL, however, is a derivative bore.  The scripters do away with the extravagant SF-idea of controlling air on Mars, and in its place is a sort of "ethnic cleansing" plot, in which Cohaagen plans to annihilate the colonial populace of Mars in order to replace them with money-saving "synthetics." (It's not clear how this mass murder was going to be viewed by the authorities on Earth.) This change in plot necessitates a change in Quaid's role, but it's one that proves much less believable in terms of Cohaagen's actions.  Beckinsale and Biel are sexy women but they, like Quaid, are constantly dressed in dark, ugly colors, as shown in the image above.  This surprises me in that the UNDERWORLD films show a degree of visual stylishness nowhere present in Wiseman's RECALL.  It may be that Wiseman had some notion of mitiating Scorcese in order to keep his RECALL distinct from that of Verhoeven, since the first twenty minutes has a ponderous, grundgy quality, particularly some time-wasting scenes in which Quaid is seen out drinking with his work-buddies.

Aside from a lively duel in an elevator-- where Lori fights Melina and Quaid fights a robot soldier-- most of the action is predictable and tedious.  It does rewrite one aspect of the 1990 film that bothered me: whereas Schwarzenegger's super-muscular Quaid simply bursts his bonds to escape a climactic trap, Colin Farrell's Quaid must use his wits to accomplish the same ends.
Posted by Gene Phillips at 2:39 PM
Email ThisBlogThis!Share to TwitterShare to FacebookShare to Pinterest
Labels: combative adventures, the marvelous