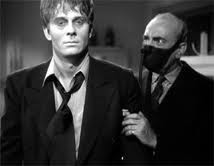 
By chance I happened to see two films separated by generations but somewhat related by the subject matter of an undead creature.

THE MAD GHOUL resembles other horror films of the Classic Hollywood period in which an older man must be prevented from gaining any influence over a nubile young woman, so that she may end up with an age-appropriate suitor.  However, GHOUL has one structural difference from films like 1935's THE RAVEN and 1936's THE INVISIBLE RAY: this time both an older man and a younger man are both interested in the same woman, and are thrown over for a third suitor.

These future "reject-ees" are also the first characters we encounter in the movie, as chemistry prof Doctor Alfred Morris (George Zucco) lectures before a class-- one that includes his protégé Ted Allison (David Bruce)-- about his discovery of a rare nerve gas he's discovered from the relics of ancient Mayans.  In private Morris reveals to Allison that the gas has the power to reduce those who breathe it to a "dead-alive" status, in which they lose all will of their own.  Morris shows Allison a monkey that he dosed with the gas, and asserts that, according to the Mayan records, the state can be reversed by infusing the subject with a liquid taken from a freshly-harvested heart.  Allison, a medical student, aids Morris in deriving some of this liquid in order to successfully (or so it seems) revive the monkey.  At this point Morris seems to be concerned only with getting his name in the scientific journals, though he makes a telling remark about testing the procedure on a human subject.  This is always a good sign of your basic Nietzschean over-reacher.

Allison's main concern is his longtime fiancee, the beautiful Isabel (Evelyn Ankers), a successful singer currently on tour with a series of radio performances.  Unfortunately for Allison, Isabel clandestinely reveals to Morris that she doesn't love Allison any more, but fails to mention that she's fallen for her pianist Eric (Turhan Bey).  Morris, despite being over twenty years her senior, jumps to the conclusion that she's in love with him.  The idea of experimenting on a human subject-- namely his perceived rival Allison-- starts looking very good to the doctor.

In jig time, Morris exposes Allison to the nerve gas, and the result, thanks to a superior makeup job given the B-movie limitations, is a dead-eyed zombie who will obey Morris' will.  However, at this point Morris's motives become a little confused.  If he wants to be rid of a rival, why doesn't he just tell Allison to write a suicide note and then go walk off a cliff?  The best I can deduce is that Morris wants to have his cake and eat it too.  When the supposedly cured monkey perishes, Morris decides to experiment on his will-less subject, keeping Allison alive in order to see if the zombification can be fully cured-- again, I must assume, so he can publish an abridged account in the scientific journals.  To keep the experiment going, Morris needs new hearts.  To keep from pissing where they live, Morris and zombie-Allison start following Isabel on her radio-tour, seeking out fresh graves in order to relieve the bodies of their hearts.  This leads to some real murders: first a cemetery-employee, and later, a hotshot reporter investigating the ghoulish activities.  The latter murder proves shocking, for in films of this period, the wisecracking comedy-relief reporter is almost never killed.

Eventually Morris and Allison both find out Isabel's true intentions.  Morris tries to get Allison to kill Eric, but the attempt fails.  During one of his lucid spells Allison learns how Morris has been controlling him and wreaks vengeance.  Then, becoming a zombie again, Allison makes a final attempt at murder, only to be shot down in a bravura finish.

Apart from (possibly) some Bulldog Drummond films, this appears to be the only film by director James P. Hogan that falls into the categories of the metaphenomenal.  It also appears to be the only such work by former Ernst Lubitsch writer Hans Kraly, who is credited with the "original story."   However, screenwriters Brenda Weisberg and Paul Gangelin both had ample genre-credits, and would later contribute the story to 1944's THE SCARLET CLAW.  George Zucco's Doctor Morris, though his actions are never very credible, becomes one of the more believable "mad scientists" of the period thanks to Zucco's talented underplaying, while David Bruce is admirably pathetic as "the ghoul."  Ankers and Bey are nice-looking but have little to do. 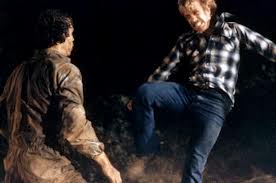 My second "undead" pic is a peculiar offering of countrified kung-fu and Frankensteinian ambitions: the Chuck Norris vehicle SILENT RAGE.  Norris had made five previous starring vehicles, all aimed at lovers of chopsocky cinema, vigilante action, or both.  RAGE is devoted to one simple idea: how good is all that kung-fu skill against an opponent who can't be permanently injured?

Mental patient John Kirby (Brian Libby) goes berserk one day and murders the people he's staying with.  Sheriff Dan Stevens (Norris), after some effort, apprehends the lunatic.  Shortly afterward Kirby tries to escape and is shot dead by law-officials.  However, because he was the patient of local doctor Halman (Ron Silver), and because Halman's boss wants a corpse on which to experiment, Kirby gets a new lease on life.  Halman and his cohorts work wonders on the dead man's status, and he arises, a mindless killing machine.

Aside from the creepy scenes as Kirby stalks about Frankenstein-style, most of RAGE is pretty formulaic.  Stevens rekindles an old romance with a girlfriend, but it doesn't add much interest, and he gets to kick the asses of several scruffy bikers.  Surprisingly, Norris actually takes some hits in this mundane battle, as opposed to many of his films, where he's virtually untouchable.  Stevens also has a comedy-relief deputy (Stephen Furst), who isn't particularly funny, but has a strong death-scene after he courageously tries to stop the undead killer.

I term this a "cosmological" film simply because the main thrust of the story is to show the evil of the scientists' meddlings with the proper order of nature.  The end fight between Stevens and Kirby is decent, and probably delivered the goods to the audience that came for it, but it's mediocre Norris-action in comparison to his best stunt-work.  Michael Miller's camerawork is on occasion surprisingly fluid for a guy who ended up doing mostly TV melodramas.

Posted by Gene Phillips at 3:46 PM
Email ThisBlogThis!Share to TwitterShare to FacebookShare to Pinterest
Labels: the marvelous