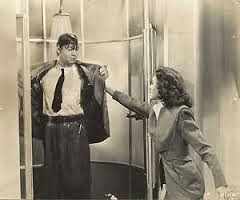 The last MGM Tarzan film is a definite step up from the previous entry, though once again it's another Boy-centric story.

For once the evil white men intrude on Tarzan's paradise by accident-- they almost run their plane into the local escarpment-- and while they are looking for lions to trap for their circus, they aren't particularly looking to trespass on Tarzan's domain.  Despite Tarzan's own dubious history with lions over the years, he won't allow any animals to be trapped, and gives the circus-people-- principally deep-dyed villains Rand and Sergeant-- their walking papers.

Unfortunately for Tarzan and Jane, Jane's loose talk about airplanes makes Boy intensely curious about the white men.  He shows off his elephant-training tricks for them, and they get the idea to make off with him and put him in their circus.  The pilot won't go along with it, but shortly afterward a group of natives attack the trapping-party.  Since Boy is in danger, Tarzan and Jane rush to the rescue.  Their vine is cut by a hostile native, and the two heroes plunge into yet another ravine.  For good measure the natives set the brush afire.  The pilot, believing that Tarzan and Jane have been kileld, agrees to let the circus-guys take Boy with them, given that the kid no longer has any protectors.

Tarzan and Jane, learning the plane's itinerary, must then pursue Boy's kidnappers to New York, with Cheetah in tow.  For once Cheetah is not the sole source of comedy relief-- though there's still too much chimp-action-- because Tarzan's encounters with civilization are played for quite a bit of comedy.  To the script's credit, it never completely lets the viewer forget that Tarzan and Jane are continually anxious for their child's safety, though such emotions are certainly played down.

Before the couple arrives in America, Jane warns Tarzan that he may encounter a world made up of nothing but lies and deceptions, in contrast to Tarzan's forthright honesty. Actually, New York comes off pretty well, tolerating most of Tarzan's eccentricities and Cheetah's outright destructive antics.  Things only become difficult when Tarzan finds the circus-villains-- but not Boy-- and gets in trouble with the cops for threatening violence.

Astoundingly, although Tarzan and Jane are able to go to court against Rand and Sergeant to dispute the latter couple's custody of Boy, the court does not demand that the circus-villains turn over Boy to the court pending the decision.  The reason is plain: the villains are allowed to keep Boy in their clutches so that Tarzan can save him from them later.  When even Jane becomes frustrated with the court's judicious wranglings, she gives the ape man permission to cut loose and go rescue Boy.  Full credits are due to those people who devised ways for Tarzan to do his high-swinging-- and high-diving-- stunts within the confines of a modern metropolis, for these scenes are the highlight of the picture.

Inevitably, Tarzan gets back to the circus.  Caged by the roustabouts, Tarzan calls to the circus-elephants, and they acknowledge his authority as much as the beasts of the jungle.  The villains die and Boy is returned to the custody of his adoptive parents.

One distasteful racial joke must be mentioned: when a black janitor (Mantan Moreland) accidentally gets on the phone with Cheetah, and hears the chimp's incomprehensible gabblings, the janitor mistakes him for one of his own people, a "colored boy."  The same essential joke appears, with no racist content, at the end of TARZAN TRIUMPHS.  Strangely, actress Virginia Grey is fourth-billed in the credits, even though she has a nothing supporting part as the pilot's girlfriend.  I suspect MGM was trying to fast-track her into greater popularity with this bit of enhanced billing.
Posted by Gene Phillips at 2:19 PM
Email ThisBlogThis!Share to TwitterShare to FacebookShare to Pinterest
Labels: combative adventures, outre outfits (u), superlative skills (u), the uncanny