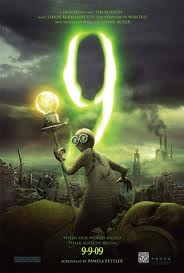 
I recently rescreened Shane Acker's first feature-length animated effort, 9. After some rescreenings I may pick up on subtleties I missed the first time.  Unfortunately, not only did I encounter no fresh nuances, I liked the animation design and the action choreography less than before.

The most problematic aspect of Acker's story-- which formed the basis of an earlier short with the same title, and which was expanded for this feature by a screenwriter-- is that it deals with a future world on which humanity has exterminated itself.  It's not impossible to wring pathos out of seeing the Earth divested of human beings, but to make the situation accessible, one must conceive a new group of beings to inherit the ill-used planet.  Some writers have achieved the proper effect with field mice, some have done just as much with robots.  But Acker's nine rag-dolls-- essentially led by the hero, who wears the titular number on his hide-- simply lack the *gravitas* necessary for the situation.

Acker begins his tale with a well-worn device: Doll Number 9 comes into consciousness with no knowledge as to what he is, what's happened to the ruined planet, or why he's being chased around by mechanized monsters that attempt to suck his soul.  Once he's made contract with some of the other dolls, they begin to fill in some of the gaps in his knowledge, but naturally they can't tell him everything,  In addition, one of the other dolls, Number 2, is captured by one of the robot monsters, but 9 perceives that the robot is keeping 2 alive, so 9 determines to rescue him. He meets opposition from a hidebound doll, Number 1, who doesn't belief in transgressing against the order of things as they appear to be, but the conflict between 1 and 9 never comes to much.

What the viewer gets, in essence, is the same basic scenario as TERMINATOR: SALVATION, but in place of human beings fleeing the victorious forces of a mechanized army, we have the dolls attempting to avoid similar machines (none of which are very impressively designed) while they attempt to sort out their origins.

I term the function of this narrative as "metaphysical" because those origins prove to be metaphysical in nature.  The dolls and the machines were both created by the same nameless inventor.  He created a super-machine that was suborned by a military-oriented government, but the super-machine created other machines and thus laid waste to humanity.  In some sort of last-ditch effort-- though its parameters are never made clear-- the scientist sacrifices his life to transfer nine parts of his soul into nine ambulatory rag dolls.  Thus, though the dolls aren't precisely programmed to destroy the super-machine and its offspring, somehow they're supposed to bring an end to the mechanized tyranny.  They do so, but it's certainly a pyrrhic victory at best, especially since the nine dolls-- minimally and insufficiently characterized-- don't suggest that they're going to prove better stewards of the planet than deceased humanity.

There are definitely ways one can meld materialistic science fiction with concepts of the soul, but Acker's approach to both concepts is wholly superficial. Just how does a cybernetic expert work out the problem of dividing his own soul into fragments?  Presenting answers to such questions can often help an author deepen the logic and consistency of his fictional world.  Unfortunately, Acker's world isn't even as well constructed as your average Ken-and-Barbie "doll house."
Posted by Gene Phillips at 2:29 PM
Email ThisBlogThis!Share to TwitterShare to FacebookShare to Pinterest
Labels: the marvelous