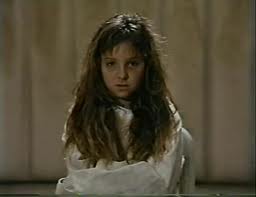 
Both of these family-related "ghost stories" were enjoyable enough TV-fare, though one is "fake supernatural" while the other appears to be real, despite a slight suggestion otherwise.

STRANGE deals with that horror staple, the city-family that moves to a house in the sticks and gets no help from the locals when things get hairy.  The Rhodes family-- father Michael, mother Christine, and teen daughter Melissa-- seem to be enjoying their life in the country.  There's a slight suggestion that Melissa may be the source of the trouble that comes.  Before anything actually happens, Melissa tells her parents and a couple of guests a bloody story about how their home was built on the site of a Spanish mission.  As the story goes, a man with a typhoid-ridden wife brought her to the mission for help, and when his wife died, he went berserk, killing the monks and burning the mission to the ground.  Unfortunately, this charmingly bloody story never serves any purpose but to suggest the possibility of ghosts.  Mysterious pounding sounds are heard, the animals around the house act strangely, and the family dog is killed.  Michael demands protection from the local country-boy sheriff but the law can't be bothered with ghosts.  In the end, the ghostly effects turn out to have had a merely human cause, which aligns the film with the "phantasmal figurations" trope.

Old pros Robert Stack and Vera Miles are enjoyable as the beleaguered parents, and Margaret Willock does well as the teen daughter, though imdb lists only 11 film/TV roles in her history.  There's a slight suggestion of a parent-child conflict in that Melissa tells her mother that she's getting too old to be called pet-names by her father.  In a real supernatural story this might have set the scene for a poltergeist-haunting, but whatever Melissa's conflicts are, the script quickly loses interest in them.  The smooth direction comes from long-time genre veteran John Llewellyn (NIGHT STALKER) Moxey.

DON'T GO TO SLEEP, directed by Richard Lang, is of a piece with OCCURENCE, in that it too has some creepy moments but never grounds the spookiness in a strong psychological schema.  Again we have a relatively stable family, consisting of father Philip, mother Laura, and their grade-school aged son and daughter, Kevin and Mary.  However, this family has a tragedy in their background: under circumstances not fully revealed until the story's end, they lost another daughter, Jennifer, in a car-accident.  At times Philip shows stress from this event by drinking heavily, but Mary shows the most extreme reaction when she starts seeing Jennifer.

Is the ghost real, or has Mary-- whose carelessness caused her sister's death-- merely become unhinged?  Lang and writer Ned Wynn don't really pull off any sort of "Turn of the Screw" homage here, for when people start dying, some deaths seem like Mary could have pulled them off while others seem pretty strongly supernatural (Kevin is pushed out of a high window by an invisible force)?  At last only Laura and Mary are left, and Mary is confined to an asylum, thought insane due to claiming she's seen Jennifer.  The film ends with Laura finding out just how real Jennifer is.

Despite the fact that the family here is more troubled and the ending more downbeat than those found in OCCURENCE, the script doesn't give much more insight into the psychology of this troubled family than OCCURENCE did for its more upbeat characters.

A couple of years after SLEEP, Lang and Wynn re-teamed on a somewhat more satisfying project, the action-packed TV-movie VELVET.  This pilot-film, focused on a team of tough female government agents, might have provided the then-successful CHARLIE'S ANGELS with some competition, but unfortunately the project never got past the pilot stage.

Posted by Gene Phillips at 3:31 PM
Email ThisBlogThis!Share to TwitterShare to FacebookShare to Pinterest
Labels: phantasmal figurations (u), the marvelous, the uncanny