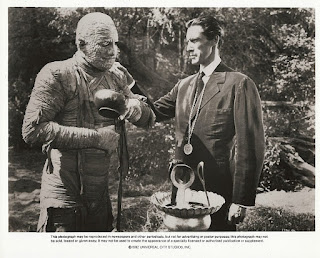 The most notable aspect of MUMMY’S GHOST, directed by frequent horror-helmer Reginald LeBorg, is that it’s the first of the four Kharis films to return to the idea of reviving the spirit—technically, the “ghost” in the title—of Kharis’ long-lost princess in a contemporary body.  In the previous two films, Ananka herself is of no great importance.  It’s her tomb, the cynosure of a modern cult of Egyptian paganism, that the mummy Kharis defends, and it’s because of the tomb’s desecration that the cult’s high priest sends the mummy after the desecrators.  As noted in the previous MUMMY-movie essay, it’s the high priest’s passion for a modern woman that usurps the idea of the undead mummy being reunited with his lost love.

At the start of GHOST several years have passed since Kharis is supposed to have perished in a fiery holocaust in the Massachusetts town of Mapleton at the end of MUMMY’S TOMB.  The setting remains in Mapleton, but now the students at the local college profess disbelief that a living mummy ever existed.  Among the disbelievers is young Tom, who little suspects that his current girlfriend will prove to have an intimate connection with Kharis.  The girlfriend, name of Amina (Ramsey Ames), has Egyptian heritage in her background, thus returning to a notion expressed in Karl Freund’s MUMMY : that though one might expect reincarnation to transcend ethnic boundaries, it’s apparently easier for Egyptian spirits to show up in those descended from Egypt.  Unfortunately, Amina is an underdeveloped character, vastly inferior to Helen Grosvenor, the heroine of THE MUMMY.  Similarly, the film’s script has little interest in any of the glories of ancient Egypt.


Meanwhile, though it’s never revealed just how Kharis survived the holocaust, the two extant priests of the Egyptian cult (located in the Egyptian city of “Arkham,” a clear shout-out to H.P. Lovecraft) are aware that  the mummy has not been destroyed.  Again, a wizened George Zucco gives the requisite orders to priest-in-training Yussuf Bey (John Carradine), sending him to America.  But there’s a new wrinkle.  Since the desecrators from THE MUMMY’S HAND were killed in MUMMY’S TOMB, the priests’ new concern is that the mummy of Princess Ananka has been put on display at a Mapleton museum.  Yussuf’s mission is to revive the mummy of Ananka and bring both mummies back to Egypt.  No further plans are mentioned: the priests don’t nurture any overt plans to conquer the world with a mummy-army.  It's implied that all they want is to reclaim what they consider to be their sacred property.


Even before Yussuf arrives to take charge of Kharis, the mummy kills a local professor who makes the mistake of experimenting with tana leaves.  Amina begins to have weird fears about anything suggestive of ancient Egypt, and at one point she walks in her sleep, drawn by the presence of Kharis.

Once Yussuf locates Kharis, priest and mummy break into the museum at night, but their plans to revive Ananka’s mummy are apparently foiled by the capricious Egyptian gods.  Before Yussuf’s eyes the body within the mummy-bandages simply fades into nothingness.  He takes it as a sign that the spirit of Ananka has become fully embodied in a modern female body, and he and Kharis depart after committing another incidental murder.


While the local police come to grips with the mummy’s return and try to set traps for the creature (easily the film’s most forgettable scenes), Yussuf and Kharis find and abduct Amina.  This breeds the first conflict between the bandaged monster and his spooky handler.  In the two previous Kharis films, the mummy’s handlers both fell in lust with nice American girls and so compromised their devotion to their faith.  There was no conflict with the mummy, though, since Kharis had no interest in any female but the one he loved in ancient times.


Yussuf becomes infatuated with Amina within moments of having captured her.  The poor girl’s given no chance to cope with the dire fate being thrust upon her when Yussuf is encouraging her to marry him, promising her (just as Turhan Bey did to a similar victim in MUMMY’S TOMB) the gift of mummified immortality, even though Yussuf himself does not seem to be any sort of immortal.  Kharis overhears the betrayal, breaks in and destroys his only ally in the strange land of America.  The mummy attempts, rather pathetically, to escape to parts unknown with Amina.  Tom arrives on the scene but fails to impede the invulnerable creature.  A convenient mob of townspeople show up to help the young man chase his fiancee’s abductor.  In a downbeat ending rare for a 1940s Universal film, the mummy walks into a swamp with Amina.  But even before Amina drowns, she shows the withered face of a mummy.  In contrast to the fortunate fate of Helen Grosvenor, Amina has been completely claimed by her ancient heritage.  Later,  in the subsequent MUMMY’S CURSE, Kharis apparently takes a subterranean tunnel, still carrying Amina's drowned body, all the way from Massachusetts to Louisiana.  There both of them emerge from a Louisiana swamp-- Amina comes back to life for no particular reason, albeit played by another actress-- and once they begin their pas de deux of death.


GHOST is something of a mixed bag.  In contrast to previous Kharis-helmers Christy Cabanne and Harold Young, LeBorg proves a phlegmatic, unimaginative director here.  He devotes an unfortunate amount of time to long shots of the mummy shambling through the forest.  This strategy may have given Lon Chaney Jr. more time to perfect his unique “mummy-walk,” but it also spotlights just how slow the creature is and how easy it should be for victims to run away from it.  Tom and Amina, though not unsympathetic, lack even the breezy appeal of the average 1940s stock characters.  The script forces Yussuf Bey to fall in lust so quickly that not even John Carradine’s sonorous voice can make the development seem convincing.

Still, there’s some pleasure in seeing this B-film flaunt the usual conventions of its kindred.  In most such films, no matter who else gets killed, the romantic couple is sacrosanct, even when they’re not overly likeable.  Although GHOST may be the least exciting Kharis-film overall, the death-scene of Amina by itself may be for many the most memorable such scene in the whole four-film series.


Posted by Gene Phillips at 11:12 AM
Email ThisBlogThis!Share to TwitterShare to FacebookShare to Pinterest
Labels: the marvelous