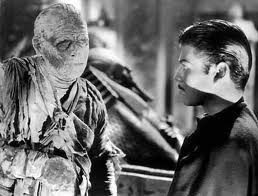 
Many horror-film references have observed that Universal's 1940s "Mummy" film-series wasn't overly ambitious in comparison to Universal's unrelated solo 1932 film, THE MUMMY.  In my review of the last film in the series, THE MUMMY'S CURSE, I said:

The Universal horror film THE MUMMY (1932) is one of a very small number of films whose mythicity I'd rate as "excellent" rather than "good" (the highest rating accorded any film thus far reviewed here). None of the 1940s Universal "Mummy" films, indirectly spawned by the 1932 work, come anywhere close to that level, but they're always enjoyable time-wasters.

One of the most impressive aspects of THE MUMMY is its ability to suggest how modernity related to the crushing metaphysical wight of the ancient world.  Though the modern world is not rejected, the 1932 movie displays a proper sense of awe before the long-vanished world of Egypt, in spite of the fact that this civilization-- like Imhotep, the titular mummy of the movie-- is long dead.  Critic James Twitchell made a facile attempt to reduce Imhotep to just another manifestation of Freud's Oedipus theory, but it's clear to me that the terror of THE MUMMY has far more to do with the metaphysics of history than with the psychology of the family romance.

However, on re-viewing the first two MUMMY films of the 1940s, I found to my surprise that the creators of the films were not entirely blind to the terrors of history.  They are lighter films, but maybe not just "time-wasters."

The original MUMMY dealt with a rejuvenated wizard, who was seem only briefly in mummy-wrappings.  The 1940s films keep its titular mummy, name of Kharis, in his wrappings as he shambles around, shrugging off bullets and strangling victims with his one good hand.  But I'd argue that in narrative terms the real star of both HAND and TOMB is not the mummy, but the high priest who seeks to control Kharis. In HAND it's a middle-aged man named Andoheb (George Zucco), while in TOMB it's a relatively young man named Mehemet (Turhan Bey).  But both of them don't just content themselves with dutifully sending the mummy around to kill infidels.

Both Andoheb and Mehemet are pictured as dedicated servants of a still-extant cult devoted to the gods of old Egypt; hence their antipathy to moderns who intrude upon sacred Egyptian tombs.  As depicted they have no lives outside of their holy duties.  There are no families in the cult; one presumes new members enter only through a process of conversion.  The early scenes in each film may remind one of the George Lucas-ism that there are only two Sith Lords at any time.  In HAND, Zucco's Andoheb is sent on his holy mission by a wizened, unnamed high priest (Eduardo Cianelli), while in TOMB, it's Andoheb-- recovered from his "death" at the conclusion of HAND-- who sends Turhan Bey's Mehemet on his way.  No other acolytes are seen in either movie.

In HAND, the wrath of the cult is aroused when American adventurers start messing around the tomb of the Princess Ananka, who was the beloved of Kharis in ancient Egypt.  In TOMB, the villainous priest takes Kharis to America to pursue the heroes of the first film, now aged 30 years.  In contrast to the 1932 film, neither of these two films have the slightest interest in either reviving the mummy of Ananka or finding her current reincarnation: this trope will only be unearthed in the next two films in the series.  What HAND and TOMB do plunder from the 1932 film is the idea of a man who represents the dead past preying on a woman of the modern age.

MUMMY'S HAND, directed by Christy Cabanne, has often been criticized for its overabundance of comic touches, and I'm in the company of those who don't like either comedy relief Wallace Ford or his "straight man" Dick Foran as the two tomb-raiding adventurers.  But given that Andoheb regards the Americans as desecrating Ananka's tomb, it's significant that he wants to do his own desecration to the female member of the party, Marta (Peggy Moran).  Maybe he views it as payback, but to the audience, identifying Marta as a good American girl, this is the equivalent of the ancient world plundering the modern one.  At the film's end, Andoheb is ignominiously shot to "death" not by Marta's leading man (Foran) but by the comic relief (Ford).  One wonders if either director Cabanne or one of the scripters had a yen to see a comic character act out of character for once, and kill someone instead of doing something silly.  Foran heroically neutralizes Kharis by depriving him of his revivifying "tana leaves" and setting him afire.

MUMMY'S TOMB, directed by Harold Young, has a grimmer tone to it.  As noted above, the script takes the odd approach of setting the story 30 years in the future, though everything in the film still looks like the 1940s.  The characters played by Foran and Ford have aged 30 years courtesy of old-age makeup, while Moran's character, having married Foran, has passed away, though not before leaving a grown son, John Banning (John Hubbard).  At the time when Mehemet smuggles the invulnerable mummy onto American shores, John is scheduled to marry his fiancee Isobel.

Mehemet sends Kharis to deal death to those who transgressed against Ananka's tomb.  It's a little odd to see the heroes of the original film get knocked off in the sequel, but now that they're supposed to be old, one might argue that they're a little more expendable than the young couple-- which curiously had the effect of making these American heroes just as doomed as the culure of ancient Egypt. Mehemet has the misfortune of seeing Isobel, with the result that he's smitten enough to consider marrying her. After he kidnaps her, the script has Mehemet claim that he intends to make Isobel into an immortal mummy, which doesn't make a lot of sense since he himself is just an ordinary man.  The kidnapping leads John and an angry mob, where Mehemet's shot when he tries to draw a gun on John. This time the mummy goes up in flames along with an entire house-- shades of the 1930s FRANKENSTEIN-- but it doesn't keep Kharis from returning in THE MUMMY'S GHOST two years later.

Griffin Jay was the only scripter credited on imdb to both of these movies and the GHOST sequel, though not to CURSE, the final film in the series.  Both he and the two directors hadn't made any horror films prior to their encounters with mummy-movies, though Jay had done one borderline metaphenomenal film prior to HAND: an exotic serial called QUEEN OF THE JUNGLE.  Jay would seem to be the individual with the strongest horror-credits, as he also worked on THE RETURN OF THE VAMPIRE, CAPTIVE WILD WOMAN and DEVIL BAT'S DAUGHTER.


Posted by Gene Phillips at 3:42 PM
Email ThisBlogThis!Share to TwitterShare to FacebookShare to Pinterest
Labels: the marvelous