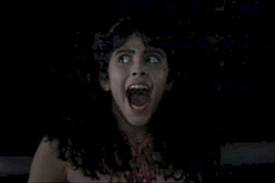 I’ve not reviewed many “psycho-slasher” films here, other than (arguably) the original PSYCHO and its remake.  Unfortunately, none of these three films tap into the sort of delirium found in the best exemplars of the subgenre.


SLEEPAWAY CAMP, written and directed by Robert Hiltzik, proves the best of the three.  In contrast to many better funded slashers, the cast doesn’t include either old-pro actors brought in for a few days’ shooting or young up-and-comers who went on future fame.  However, as Jim Harper points out in his slasher-survey LEGACY OF BLOOD, CAMP benefits from casting a lot of fairly ordinary looking people.  Hiltzik also takes a fairly low-key approach to the pace, which doesn’t make for many thrills but at times gives the proceedings a decent creepy feel.


Several years previous to the main storyline, careless teens at the titular camp bring about a boating accident in which someone—it’s not entirely clear who—is killed.  Years pass, and teen girl Angela-- who’s so retiring that she seems borderline autistic—is sent by her adoptive mother to Sleepaway Camp, along with her male cousin Richard.  She’s the instant outcast amid all the raucous boys and catty girls, though Richard tries, rather ineffectively, to protect her.  Despite her shyness, she picks up a devoted boyfriend, which is more action than her cousin receives.  In what may be a case of transference, on first arriving at camp Richard encounters Judy, a queen-bitch type with whom he had some minor fling before, but now Judy won’t give Richard the time of day.  Yet Angela picks up a handsome young suitor without even trying.  Then bully-boys and bitch-girls commit all manner of petty nastiness, and soon a mystery killer deals out death to both bullies and bitches.  The killing-methods are passably gruesome though not as well executed as those in this film’s first two sequels.

Speaking of the sequels, I saw both prior to screening the original film.  The sequels make explicit the first film’s “big reveal:” not only that Angela is the killer, but that she is a he; a boy masquerading in drag due to the perverse upbringing he was given by the adopive mother. Without that bit of prompting, I might not have foreseen that wrinkle, for Hiltzik only puts forth a few sparse clues as to Angela’s true nature.  I don’t agree with the prevailing critical view that the slasher-subgenre invariably deals with concepts of sexual dysfunction.  However, it’s true that most of the stronger entries in the subgenre exploit this trope.  SLEEPAWAY CAMP includes none of the psychological subtleties of, say, PSYCHO, but it’s reasonably effective genre-fare. 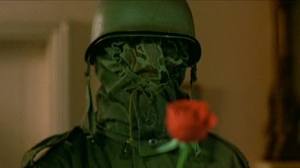 Not so another 1980s slasher with an incredibly overrated reputation, Joseph Zito’s THE PROWLER.  Thrills are hard to come by given Zito’s plodding pace and deadly-dull script, and though it has a couple of old-pros in the cast (Lawrence Tierney and Farley Granger), they don’t do anything of note, while the young noname cast is singularly unimpressive, even for a slasher-film.  PROWLER does have a great deal of nostalgic defenders, however, so I have to assume that the film became notorious thanks to the name-value of makeup-and-effects guy Tom Savini.

Like most slashers, this one centers around an event that should be an occasion of mass celebration and turns it into one of mass murder.  Thirty years previous to the main story, an unnamed soldier ends his hitch but returns home to a Dear John letter.  At a graduation-ceremony he murders his ex-girlfriend and her new boyfriend with a pitchfork and then escapes.  The site of the ceremony is closed for the next three decades, until someone decides to hold another graduation-ceremony there.  In no time at all, dead teens are piling up like cordwood.

The death-scenes are the only reason to watch PROWLER, but at that, they’re fairly paltry affairs.  One expects stereotyping of characters in slashers, but these imperiled teens aren’t even effective stereotypes.  The idea of using a pitchfork as the killer’s modus operandi may have helped boost the film’s notoriety, for as other critics have observed, most slashers favor visceral, non-ballistic weapons for their murders.  That makes it all the odder that PROWLER should be one of the few films where the killer actually uses a mundane gun at one point—admittedly to shoot someone who’s just shot him.  Still, on that basis alone the Slasher Hall of Fame should refuse to admit the Prowler, for breaking with tradition.  There is a “final girl” here, as there is not in SLEEPAWAY CAMP, but like PROWLER’s other characters she’s as dull as dirt.  There’s also a nonsensical “shock ending” strongly indebted to dePalma’s CARRIE.

RIPPER: LETTER FROM HELL is a more modern recreation of the old chestnut about a contemporary killer attempting to emulate the deeds of uber-slasher Jack the Ripper.  Again a years-earlier traumatic event precedes the main story, as we see two women, Molly and Maggie, menaced by an unseen killer during a driving rainstorm.  Flash-forward several years, and it’s revealed that in some manner Molly (A.J. Cook) survived the carnage.  She and several other bright students are now at college, taking a criminology course from Professor Kane (Bruce Payne), renowned for his writings on the psychology of serial killers.  Molly doesn’t work or play well with her study-group partners, but collegiate conflicts are the least of the students’ problems. 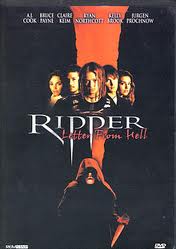 Their class’s studies in Rpperology inspire someone to start duplicating the Ripper’s murders of Victorian prostitutes.  One might expect, given the college milieu, that the students might be persecuted for sleeping around and being generally improper, but the script doesn’t impute any fevered sexual hijinks to them.  The guessing-game begins: is it one of the students?  Is it the professor, or the spooky policeman (Jurgen Prochnow) obsessed with Kane’s guiltiness?  Is the killer the same person who menaced Molly and her dead friend at the start of the picture?

As with PROWLER, the characters are too thinly drawn even to function as enjoyable stereotypes.  Their big claim to individuality, if one may call it that, is that a number of them share the initials of Jack the Ripper’s victims.  But even for a slasher it seems improbable that a group of randomly assembled college students would just happen to have all the requisite initials.  John Eyres’ direction is generally impressive except in the death-scenes, which are often visually confusing or tedious.  Despite all the opportunities for academic pronouncements on the psychology of the Ripper specifically or serial killers generally, there’s zero insight here into the twisted passions of a killer.  In the DVD commentary Eyres reveals that RIPPER’s killer was supposed to be someone other than the culprit revealed, but that because of constraints related to budget, the killer’s  identity was shifted to another suspect.  This may explain why the climactic revelation proves gratuitous and unsatisfying.


For what it’s worth, this is one slasher in which male and female victims are not only killed in the same proportion, but are killed without revealing a lot of boobs and butts.  The film ends on a slight ambivalence, raising the possibility that it's been seen through the eyes of a mad person, but it's so tenuous that I don't regard it as being of any consequence.


Posted by Gene Phillips at 10:48 AM
Email ThisBlogThis!Share to TwitterShare to FacebookShare to Pinterest
Labels: perilous psychos (u), the uncanny