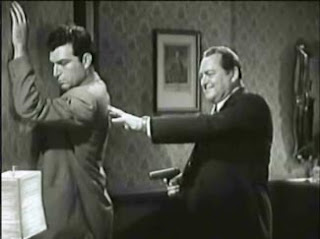 Since I just devoted an essay to two "uncanny-metaphenomenal" films which involved visually impaired heroes with impressive fighting skills, it seems right to touch on a film which uses the same trope in a naturalistic-isophenomenal manner.

Most compilers of fantasy-film encyclopedias don't include the Zatoichi films, since they don't contain anything overtly "marvelous."  With the notion of the "blind hero," though, I extend the same logic that I do to the "masked hero," as seen (for example) in my review of THE MAN FROM BROKEN GUN.  The hero of that film doesn't do anything beyond the boundaries of what a skilled human being can do, but the act of taking on a masked identity-- one that personifies justice-- qualifies it for uncanny phenomenality.  Zatoichi's actual skills are also within the boundaries of human abilities, yet the idea of a blind man being able to outfight not just one but sometimes several sighted opponents conveys a sense of the more-than-human.

This is not the case with the modern-day blind detective Duncan Maclain, who first appeared in the prose works of writer Baynard Kendrick.  Possibly MGM Studios contemplated a series featuring the detective, since one more entry for Maclain-- entitled THE HIDDEN EYE-- appeared, though not very speedily, since the second film didn't hit theaters until 1945.

Maclain, though totally blind, makes up the defienciency by taking advantage of others' overconfidence in his presence.  The opening film also shows him practicing the relatively-new combat of judo, which makes feasible for the hero to win a hand-to-hand battle with a sighted opponent at the conclusion.  But in contrast to Zatoichi, there's absolutely no indication that Maclain's sightlessness confers any specialness upon him.

In contrast to many B-mystery films of the time-- including HIDDEN EYE-- EYES's plot has somewhat more psychological density.  Perhaps this is because, unlike the sequel, it was adapted from one of author Kendrick's novels, though as I've not read it I can't testify to any points in common.

Maclain (an excellent Edward Arnold) receives his new case from an old friend (possibly an old lover), age-appropriate Norma Lawry.  Norma has married a widower named Stephen, also a top scientist working with the US military. Unfortunately for her, Stephen has a grown daughter, Barbara (a young Donna Reed).  Barbara may have a bit of an Electra complex toward her dad, for when Barbara begins an amateur acting gig, she meets, and begins dating, one of Norma's former boyfriends, another older man named Paul.  As Norma tells Maclain, though she didn't have any more feelings for Paul, Norma wanted to discourage the relationship.  Norma has the misfortune to stumble across the murdered body of Paul, and to be seen by Barbara.  Barbara then uses her knowledge to blackmail Norma to divorce Stephen and go away.

The setup is more interesting than the resolution: in keeping with the wartime theme, Maclain learns that Paul was actually murdered by a nest of Nazi spies masquerading as domestics in Stephen's house.  Led by a harsh-looking older woman (another older woman!), name of Cheli, the spies hope to suborn Barbara and Stephen to their cause.  Maclain, his seeing-eye dog and Barbara finally join together to defeat the spies.  Barbara even gets the chance to belt Cheli a good one, which may represent what she'd like to do to the woman who stole her daddy.

The ending is a little unusual, for most mystery-programmers of the time were careful to match up young ladies with young gentlemen beaus.  Not only is there no young beau for Barbara at the end of the adventure, she ends by asking the much older Maclain on a date.  Not only does he accept, there's even brief talk-- perhaps not entirely as a joke-- about him "spanking" her.  So even though Barbara is thwarted of her earlier project to get hold of one of Norma's old boyfriends-- which may be code for a paternal substitute-- she ends up with yet another old friend of Norma's.  There are no indications that either Norma or Stephen disapprove of this May-December date, though.


Posted by Gene Phillips at 10:57 AM
Email ThisBlogThis!Share to TwitterShare to FacebookShare to Pinterest
Labels: combative adventures, superlative skills (n), the naturalistic