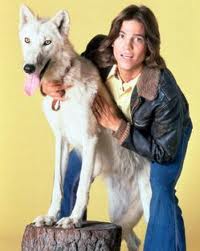 I recently rewatched the telemovie LUCAN-- pilot for a short-lived 1977-78 series-- not because I had great memories of it but to determine whether or not it fit my trope for "outre outfits skills and devices."  It did, with emphasis on the "skills" section only.

LUCAN was one of many 1970s series-concepts based around a "wandering weirdo" and patterned after the successful 1960's drama THE FUGITIVE.  Lucan is an orphan who was raised by wolves until the age 10, at which point other humans found him and took him back to their world.  Over the next decade or so he becomes acculturated into most if not all human ways-- at least enough that he wears cool clothes and has his hair regularly styled.  But just as Tarzan became a superior man due to the rigorous upbringing of his ape buddies, Lucan shares with his wolf-family keener senses, abnormal (though not inhuman) strength, and the ability to take giant leaps.  The leaps make him look less like a wolf and more like a jackrabbit, but an adopted wolf has to adapt as best he can.

Like THE FUGITIVE, the template was simple: the hero would wander around from town to town, inevitably taking time out from his own pursuits to play the Good Samaritan and solve problems for good but needy people.  LUCAN is more adventure-oriented than FUGITIVE, in that dramatic conflicts play second-fiddle to seeing Lucan trounce some bad-guy (all in a very restrained way that was characteristic of 1970s television).  In this particular offering, Lucan-- nicely played by Kevin Brophy-- uses his wolf-senses and powers to help out Stockard Channing, though a few days after the re-watch I've completely forgotten what Stockard's  problem was.

If you're not interested, as I was, in the show's position in the NUM theory, you still may find it a pleasant enough timekiller, chiefly thanks to Brophy's attempt to play a wolf adjusting to becoming a man.

I note that this movie possesses a "cosmological" function in that the society of wolves is at least referenced, though not in any significant detail.

Posted by Gene Phillips at 3:09 PM
Email ThisBlogThis!Share to TwitterShare to FacebookShare to Pinterest
Labels: combative adventures, superlative skills (u), the uncanny