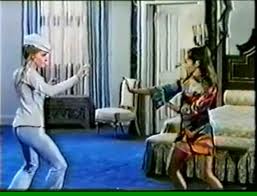 
This was the last and IMO the least of the four 1960s "Matt Helm" films starring Dean Martin as superspy Helm.

In my reviews of the other three I've found that the series' most interesting sociological motif has been its teeter-totter attitude toward women. In my recent review of the first two films, I found that the first one, directed by Phil Karlson, treated its heroine rather badly, while the second, helmed by Henry Levin, made its heroine-- again, an "amateur sidekick" to the main hero-- considerably more formidable.  The third film, also Levin-directed, which I reviewed some time back, eschewed the use of an amateur, placing Helm between the affections of a good spy-girl and a bad spy-girl, both of whom proved quite competent.

With WRECKING CREW Phil Karlson comes back to the director's chair.  Since the end-credits announce that the producers intended to make yet another sequel entitled "The Ravagers," the filmmakers probably didn't think of this entry as wrapping up the franchise.  The only effect of Karlson's return is that once more we have the Return of the Klutzky Sidekick seen in THE SILENCERS, although the type has been crossbred with the efficient good girl-spy of AMBUSHERS.

Of all four this storyline seems the least interested in the villain's diabolical plan and its consequences for the free world.  Count Contini (Nigel Green) is little more than a roadshow Goldfinger, who heists a billion-dollar gold shipment from the U.S., thus threatening the economy (which is nowhere near as much fun as the death-dealing "helio beams" and flying saucers of earlier films).   Contini is aided by various Asian agents, including a female agent with the corniest name yet seen in the series, "Wen Yu-Rang."  But he himself is a dull villain, who misses several opportunities to knock Helm off, with the usual I-have-to-learn-what-you-know-before-I-kill-you rationale.

Helm, however, has only one aide: a British agent named Freya (for the Norse goddess?)  Freya, perhaps because of her youth and inexperiences, shows herself a continual screwup, prompting Helm to utter the same sort of acidulous putdowns seen in SILENCERS, though at least Helm doesn't treat Freja with the same level of sadism.

Because Contini has Asian agents, some of them engage Helm in martial-arts battles, all of which are atrocious.  Dean Martin looked like he tried to fake-fight a little bit in MURDERERS' ROW, but here he's just doing transparent setups with various stuntmen.  But there is one good fight-scene-- possibly choreographed by Bruce Lee-- that transpires near the end between Sharon Tate's Freya and Nancy Kwan's Yu-Rang.  Neither actress would be likely to outclass Eliza Dushku or Michelle Yeoh in the art of movie martial arts, but they put more into their effort than the lethargic Martin.

The last image of the film is a strange choice. After the villain's been defeated aboard a speeding train-- with Freya taking out one of the henchmen rather nicely-- the hero settles down for connubial bliss in the DOCTOR NO tradition.  As they're getting it on Freya's foot accidentally hits a brake, sending both of them catapulting toward the front of the train, toward certain injury and/or death.  The action freezes there, and a helpful caption informs us that not only does Matt Helm survive, he "got where he was going," wink wink nudge nudge.  It's rather appropriate that a near-farcical adventure-series should end with an image of a farcical death.
Posted by Gene Phillips at 3:32 PM
Email ThisBlogThis!Share to TwitterShare to FacebookShare to Pinterest
Labels: combative adventures, the marvelous