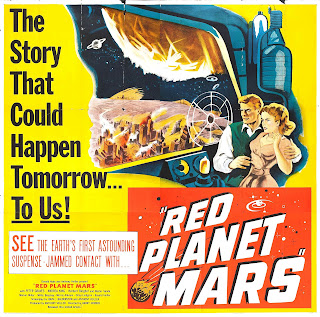 
Some critics, aware of the real existence of paranoid elements in 1950s America, tend to see every SF-film from that decade as recapitulating those elements.  If this were true in fact, 1950s audiences would have stopped coming to SF-films in very short order, for they would have always known what to expect.  That said, some contain elements of paranoid psychology in very diluted forms, while others are more overt in pursuing them.

RED PLANET MARS is without question one of the most overt.  Scripted in part by John L. (DRACULA) Balderston from his own stage-play, MARS proposes a religiously-oriented “thought experiment” by which the era’s greatest bugaboo, the Communist menace, could be eradicated through the power of words rather than by force of arms.

In many SF-films a gender-dichotomy appears between the characters portrayed by the “male lead” and the “female lead.”  Usually the man is eminently willing to break new conceptual ground; to attempt risky experiments or explore new terrain, while the woman is the conservative one, constantly wary of danger and of overstepping social boundaries.  The question of religion doesn’t usually become a conflict between the couple in 1950s SF-films, but given the overall dynamic of the dichotomy, one would expect the female to be the one harping on “things God did not mean for man to know,” while the man would be anxious to overstep those boundaries in the name of science.  However, it was rare that the female lead’s reservations would be proven to be incontrovertibly correct. More, SF as a genre generally had a contentious attitude toward religion, so the defenders of religious verities were not usually validated in all respects.

The husband-and-wife scientist team of Chris and Linda Cronyn (Peter Graves and Andrea King) reproduces this dichotomy without fail.  Though Linda is a scientist herself, she experiences religious qualms at Chris’s current experiment: attempting to contact Mars.  Using an advanced “hydrogen tube” for his broadcasts—the invention, significantly, of an ex-Nazi, now-Communist scientist named Calder—Chris sends radio messages to Mars in an attempt to contact its hypothetical civilization. Chris, though unswervingly devoted to the cause of science, evinces some Faustian overtones, implying broadly that he wants the personal glory of going down in history as a great contributor to science.  The first “answering” signals seem to be mere rebounds of his broadcasts, but he eventually gets the idea of including the incomplete value of “pi” in his broadcast, to see if the Martians will finish the equation.  In short order the Martians do so, and begin sending official messages to the people of Earth, describing their advanced civilization.

What follows seems a broad warning against the dangers of “freedom of speech.”  Even though the people of Earth have no literal contact with the denizens of Mars, the Martians’ alleged mastery of advanced science and social order spreads worldwide panic.  Capitalist businesses prove particularly vulnerable: even the rumor that some new science may render current technology obsolete sends the stock market into a tailspin.  This may be Baldestone’s best insight: showing how deeply capitalism was implicated in a sort of day-to-day “faith”—not in religious precepts, but in the inertia of everyday experience.


Despite the financial and social turmoil, Chris sticks to his guns, believing that all scientific knowledge should be fully available.  The government reluctantly agrees, upholding his civil rights to continue his Martian broadcasts. Then the broadcasts take on overtones of sacred revelation.  All over the world religions—not only Christianity, but also Judaism, Buddhism and “Mohammedism”— make thousands of new converts.


But there’s a fly in the ointment, and it’s the aforementioned inventor of the hydrogen tube.  Calder, seen early in the film, apparently marvels at Chris’s results when speaking to his evil Communist masters.  He appears to perish in an avalanche, but later shows up on Chris and Linda’s door to reveal the truth.


According to the rogue scientist, he’s been the agency behind the Martian broadcasts, circulating the appearance of a super-religious civilization so as to pull the rug out from under mankind’s religious community.  He doesn’t even do it because he’s an ardent Communist; he just holds a pathological hatred of all mankind and lusts for its destruction.  Because Calder is armed, Chris and Linda can’t directly attack him to prevent his insidious plan from coming true, but they consider overloading one of their devices so that it will explode and doom them all before the secret is revealed.

In the ensuing moment, Linda's religious leanings are vndicated.  A new broadcast—one which neither Calder nor the Cronyns could have made—confirms at last that there is life on Mars, and it worships God.  Calder, filled with rage, blasts away at the very device Chris and Linda hoped to trigger.  He thus blows all of them, thus preserving the secret without the necessity of Chris and Linda committing functional suicide.  The religious conversion-movement grows with such rapidity that the Communist Empire is overthrown.  The planet Earth becomes a haven of peace.  Chris and Linda die but their sons will grow up knowing that all the world will venerate their names—thus accomplishing Chris’s ambitions, though not in the manner he originally desired.

In Campbellian terms this must be considered a film about metaphysical issues, but it remains a superficial one.  There may be good arguments one could make about the superiority of religion to science, but Balderston doesn’t present any sort of argument.  I give it a ‘fair” rating in terms of mythicity mostly because of the aforementioned sociological critique (however indirect) of American capitalism, and for its slight twist on gender roles.  It’s clear that Balderston had no conception of the dynamic underlying Communism, and even a cognate film like THE GAMMA PEOPLE showed more ideological insight into the fabled Red Menace.  Arguably the bland direction and the indifferent acting by the two leads match the stereotypical conceptions of the script. 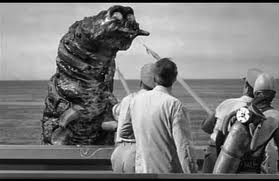 THE MONSTER THAT CHALLENGED THE WORLD is a decent but unexceptional creature-feature of the period.  Released about three years after 1954’s THEM!, MONSTER feels like a minor variation on the earlier film's invasion of giant ants.  In place of the ant-army, the 1957 film substitutes a less spectacular attack by a group of prehistoric mollusks with a strong resemblance to caterpillars.  Though a group is implied, only one monster is seen onscreen at any time, so that the paranoid fear of “the other” isn’t conjured as strongly as it was in THEM! To be sure, THEM! was not a super-expensive film, but its producers proved skillful at suggesting an army without showing much on screen.  MONSTER doesn't overcome its limitations in that respect, but the mollusk-monster is a solid design.

It might be too much to regard the trope “military vs. monsters” as a genre in itself, but MONSTER does begin and end with the American military’s efforts to contain the prehistoric beasts, only incidentally involving civilians.  The usual scientific gobbledygook is brought out to explain the revival of the mollusks, and radiation is referenced but never anathematized as a source of evil.  The acting is as bland as the script, except for Audrey Dalton, who conveys a good level of fear at the monster’s advent.


In contrast to THEM!, there’s no great sense that the beasties represent any sociological boogies, so I’d regard the main Campbellian function as “cosmological” in the sense that it takes a normal creature and inflates it into a menacing “other.”


Posted by Gene Phillips at 12:22 PM
Email ThisBlogThis!Share to TwitterShare to FacebookShare to Pinterest
Labels: the marvelous